It can be tricky to find a seat during Oktoberfest, but here are a few alternative ways to experience it without devouring a liter of beer.

In 1810, a horse race was held to celebrate Bavarian Crown Prince Ludwig’s wedding. The jamboree was such a rip-roaring success that it became an annual event and morphed into today’s famously large and ribald party. The horse race was dropped in 1938 because everyone was only interested in one thing: beer. The amber nectar is enthusiastically quaffed by more than six million Lowenbrau-lovers, from local, lederhosen-clad gents to antipodean gangs. Sitting at long trestle tables with thousands of other beer monsters in huge, multifloored tents, the international inebriants work their way through more than 6.5 million golden liters. The festival’s healthy diet also includes some 500,000 chicken, 104 oxen, and more than 50,000 pork knuckle servings.

The merriment begins with the Brewer’s Parade, which proceeds through the city center from Sonnenstrasse to the festival meadow at , ’Wiesn’ (dee-). The lord mayor stands before the thirsty masses and, with due pomp, ceremony, and a opens the virgin barrel by slamming home a wooden tap. He exclaims O’zapft ist!’ (It’s tapped!) and the crowd cheers, though they are probably less impressed by the mayor than the buxom waitresses in laced bodices. Soon the waitresses will be doling out the Bavarian brew, drunk by the 1L Mass (tankard).

To make matters simple for those who have just consumed one pretzel and three steins, only one type of beer is available. In the paraphernalia-decorated marquees run by Munich’s major breweries, Lowerbrau et al serve specially brewed ‘Oktoberfest-Bier’. More challengingly, you pay using special tokens sold by the tents and generally must be seated to get served. Negotiating such rules could prove tricky for drinkers on their way to becoming a Bierlichen (beer corpse), but such casualties will probably be busy with Bieseln (wild peeing).

At the weekends, and after the first ceremony, it can be tricky finding a seat. But there’s plenty of entertainment that doesn’t involve glugging frothy tankards until oom-pah bands sound appealing. Just check out the sheer scale of the world’s largest drinking competition. It employs more than 10,000 people and has own police force, lost and found office, childcare center, fire brigade, consumer protection unit, baggage checkroom, post office and a first-aid station. It installs its own sewage system, power stations, U-Bahn terminal and, of course, 1000-plus Portacabins.

At night, drunks blink confusedly at the dazzling carnival with its roller coaster and Ferris wheel. Amid the high-tech rides, a few nostalgic favorites have survived. There’s Germany’s last remaining flea circus, a fixture since the 19th-century, and the Schicht’l Tent, where sleight-of-hand beheadings are a specialty. There’s one way to become a beer corpse…

5 - messier than a stag night.

Tuesday is Family Day, with reduced prices for sideshows and rides. Book accommodation months in advance. 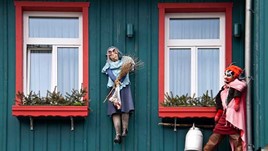 Make the most of Germany's annual rubber duck race with these tips from Lonely Planet. 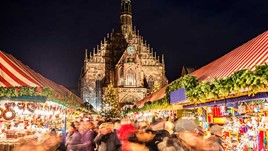