This region of northern Georgia, on the slopes of the Greater Caucasus, is home to towered medieval villages and the fiercely independent Svan people. Joe Furey treks its rugged mountain passes on horseback, savors the local food, and crashes a wedding.

“Stop trying to lead him,” yelled my guide. “I don’t care if you’ve ridden before. He knows the way – you don’t. If you think you know better, why don’t you carry him?”

I was doing no such thing – I hadn’t been on a horse in five years, and despite his careworn expression, I was happy to let my docile steed pick his way among the icy rocks.

The horse, a heavy-set grey kabarda, bred for altitude and endurance, was no anachronistic indulgence, but the only way to get to where I wanted to go in Georgia’s largely roadless Upper Svaneti. It was just a pity he belonged to my boorish guide.

Trekking in the Upper Svaneti

The Upper Svaneti, a region of northern Georgia situated on the southern slopes of the Greater Caucasus mountains, has all but cornered the market in rugged-scenic. On horseback, the views simply kept coming, like ever-changing backdrops to a wonderfully ambitious theatrical production.

Serrated peaks left, right, and center, I was riding along the Ckhutnieri Pass, about 8,860ft (2,700m) above sea level, saddlebags stuffed with moreish nibbles prepared by my guide’s mother: khinkali, spiced lamb dumplings; khachapuri cheese bread, made with guda, a pungent sheep’s milk cheese that is aged in sheepskin; and pkhali, deep-fried balls of veg, herbs, and ground walnuts. It was all I could do to not stop to eat 20 times an hour.

Our trek had begun in Mestia, the biggest settlement in the area; it had taken us through the villages of Mulakhi and Adishi; and now we were bound for Ushguli and the Shkhara Glacier. I had expected the glorious mountainscapes – the sort of wilderness that makes one wonder how life survives there, never mind thrives – but I hadn’t reckoned on finding a treasury of early Christian art among its folds. Dating back to the 9th century, the churches here, hut-sized but richly decorated with frescoes, icons, and ornamental crosses, were never plundered. And the faith practiced in the Enguri valley is quite unlike the observances of the Georgian Orthodox Church.

I underwent a conversion of my own at the Shkhara Glacier. The plan had been to scale her, and ice picks and crampons had been packed to that end, but when I finally saw the glacier, dazzling from deep within, as though she were about to give birth to the sun, I decided to leave her to her own beautiful devices.

There’s more to this place than its good looks and history, however. The Svans, a fiercely independent people with their own language – from an ancient linguistic family – and customs going back a couple of thousand years, still live here. I’d always been fascinated by the Svans. The words used to describe them – “atavistic”, “bellicose” – are generally applied to defunct civilizations in museums or notorious tribes in fantasy fiction. And there was something undeniably Game of Thrones about my time in Upper Svaneti: small villages with early-medieval foundations but built big, with six-story koshki, or tower-houses, and other fortifications, to repel invaders. Ushguli, a community of four villages at the head of the Enguri gorge, and the best example of its kind, is a UNESCO World Heritage Site.

A traditional Svan wedding in Mestia

In Mestia, a small town of 2,000 people, I fell into conversation with a self-declared “big city Svan” who had come up from Kutaisi (now a Ryanair destination) to see his cousin get married. Tariel was swigging from a hip flask, which contained chacha, a sort of Georgian grappa – this time flavored with figs – that could power a small planet. Its potency might be what inspired Tariel to invite me to the forthcoming nuptials, a generous offer that wasn’t his to extend.

The Svans are a superstitious lot who, though perfectly hospitable to visitors, react to bad omens with displeasure. My appearance at a sacred event, alongside Tariel, who his aunt told me was “a problem child” though he was well into his 30s, wasn’t something that either side of the wedding party appeared to welcome.

I was introduced to the family, and stuck to pleasantries, which Tariel translated with a bland smile (he claimed to have acquired his English through watching British TV sitcoms such as Only Fools and Horses). His father, however, was keen to talk about an old blood feud with an Ushguli family, which began when an uninvited foreigner failed to honor basic etiquette at a wedding feast, serving himself third, and with the best cuts of meat, rather than last, with whatever was left. It was a cautionary tale, and a smirk played about his lips as he told it – he was clearly enjoying playing the forbidding patriarch.

The celebrations, which I watched from what I hoped would be a safe distance, were a curious blend of folksy-traditional and decidedly pagan, with a bullock sacrificed to confer good luck on the union, and the donning of animal masks – bears, rams, birds of prey – which appeared to serve some ritual function.

I joined a party of Svans standing at a slight remove of their own. They were from the Kodori Valley, in what is now Abkhazia, which declared itself independent of Georgia in the 90s. Though it’s considered Russian-occupied territory by Georgia and is unrecognized by all but five of the member states of the UN, I was told the mountain-pass borders separating Svans from Svans were notional at best.

Slowly but surely, and doubtless irrevocably, development has come to Svaneti. There are ski resorts at Hatsvali and Tetnuldi, both close to Mestia, with restaurants at lift stations promising panoramic views of Mt. Ushaba. Hatsvali has well-groomed slopes suitable for novices and intermediates, and forested stretches for glade skiers; Tetnuldi, open since 2017, has a few tougher runs.

Georgia’s future has been looking increasingly European since 2011, when the country’s president expressed a desire for it to join the EU. In 2017, new legislation allowed Georgian citizens to travel for short periods to most EU member countries. This year, for Svaneti specifically, the EU launched a development project whose aim is to maintain a Svan presence and improve livelihoods in the region by giving mountain tourism and organic food cultivation, Svaneti’s two growth areas, a helping hand.

London is your cheapest gateway to Upper Svaneti. Ryanair and Wizz Air fly from Luton Airport to Kutaisi in west Georgia. Marshrutkas (minibuses) run from the center of town to Mestia, a six-hour journey (20 Georgian Lari or about USD $8). Or you can take a train or marshrutka from Georgia’s capital, Tbilisi, to Zugdidi, the capital of the Samegrelo-Zemo Svaneti region, and change there for Mestia.

A full day’s guided riding (six to seven hours) costs about USD $160. Treks are generally conducted at walking pace and the horses are sturdy and dependable.

There’s accommodation in Mestia (plenty of hotels) and Ushguli (a few guesthouses), starting at USD $6 a night.

Polyphonic singing, epic scenery, a moving story about the breakaway republic of Abkhazia, and more. Traveling to Georgia? 8 Tips on How to Stay Healthy

What is the standard of medical facilities in Georgia? Find out about health concerns, from rabies to malaria, this is what you need to know. 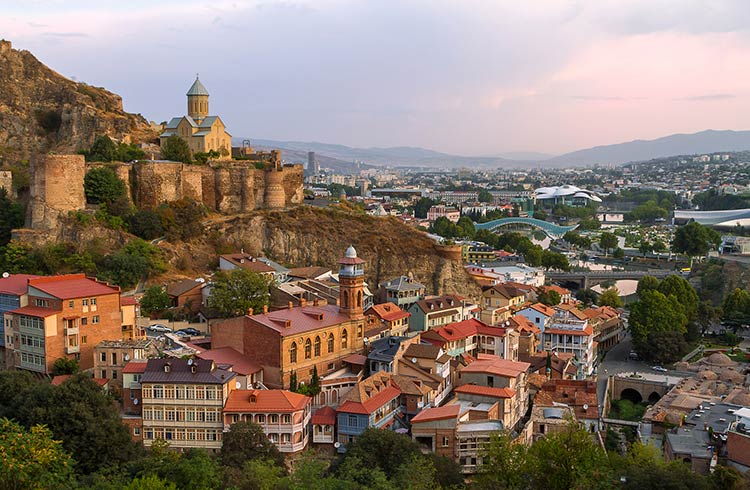 Is Georgia dangerous or safe for travelers? Paola Totaro shares her tips so you can stay out of trouble on your trip.