Getting Away From the Glitz in the United Arab Emirates

There’s more to Dubai than skyscrapers and malls. Nomad Alicia explores Dubai’s art scene and desert wilderness, and immerses herself in Sharjah, the cultural capital of the UAE.

The high rises, lavish hotels, glitzy restaurants, and rooftop pools that Dubai is renowned for were never a draw for me. In fact, these commercialized attractions were the reason that I avoided visiting the city for years. When I ended up in the United Arab Emirates earlier this year, I was determined to seek out the creative and outdoors experiences in Dubai and the surrounding Emirates. Although at times the quest was exhausting – particularly in the 100°F heat – it reminded me of the joy I find in seeking an alternative face to a locale when traveling.

Beyond the more obvious attractions in Dubai lie a handful of creative-driven neighborhoods and innovative museums that host rotating and permanent exhibits. I was in town at the same time as World Art Dubai, an annual event that hosts an impressive display of more than 2,000 works of art contributed by emerging and acclaimed artists from around the world. I was struck by the diversity of innovative, contemporary pieces juxtaposed against more traditional paintings. The expo even included an experiential corner that encouraged visitors to explore their creative side and spray-paint white, floor-to-ceiling canvases.

Al Quoz, a neighborhood in an unassuming and dusty strip of the city, transported me to a different place altogether, as it echoed the vibes of places such as East London, Berlin, and Seattle. This eclectic corner of Dubai is characterized by clusters of colorfully graffitied shipping containers that have been converted into co-working spaces, cafes, and art galleries. I wandered in and out of a dozen small galleries along vibrant Al Serkal Avenue, admiring works representing themes from the theoretical Palestinian utopia – through colorful paintings in Zawyeh Gallery – to the abstract works of Syrian artist Thaier Hela in Ayyam Gallery, who experimented with broad concepts such as finding light among darkness and the meaning of existence.

Jameel Arts Center is an immersive museum on a peaceful stretch of the Jaddaf Waterfront. The innovative galleries in the space were among the most thought-provoking I encountered in Dubai. The artist’s garden outside the museum is filled with plant species native to the UAE, used both for food and medicinal purpose. The garden is an extension of the “Desert is a Forest” exhibit, which examines the politics of food and the way humans interact with the environment. Inside, I slowly browsed an exhibit comparing the individual self with the digital identity, and a powerful display of mixed media capturing an individual’s experience seeking asylum in Kurdish Iraq.

Commonly considered to be the cultural capital of the UAE, Sharjah is a 30-minute drive from Dubai and yet a world away. I spent the day exploring cultural hubs and walking along the peaceful harbor lined with elegant mosques that evoke the feeling of an Arab port town, a stark contrast from the futuristic elements characteristic of Dubai and Abu Dhabi. I walked along stretches of promenade parallel to the harbor and meandered through mazes of side streets filled with souks and Indian and Afghan food joints. I peeked into the traditional rock and adobe structure of the Sharjah Fort in the city center and browsed museums showcasing the art, history, and religion of the UAE and the MENA (Middle East / North Africa) region at large.

On the Al-Majarrah Waterfront, the Museum of Islamic Civilization stands as a novel museum of its kind in the UAE. More than 5,000 art and culture relics from across the Islamic world are housed here, representing Islamic history, art, culture, and science throughout the centuries. Sharjah Art Museum is a more contemporary entity and one of the largest art exhibitions in the Gulf. At this museum, which showcases work by renowned artists from across the MENA, I spent most of my time captivated by the brilliantly colored, dream-like paintings of Tunisian artist Baya Mahieddine.

Outside of the busy urban centers, there are conservation areas, mountains, and deserts perfect for camping, hiking, and other outdoor adventures. While it was too hot for the hiking trip in the Hajar Mountains I had hoped to go on, I headed instead to the desert for a couple of days to explore vast ecosystems buzzing with life. I was happy to see the Dubai skyline receding into the distance as I drove through arid, sparsely populated stretches of land on route to the desert.

Once alive with diverse animal species, much of the desert region experienced significant depletion over the past decades. Several conservation initiatives have been established in recent years in an effort to restore the flora and fauna native to the desert regions. Dubai Desert Conservation Reserve area is among them, and I learned about eco-friendly travel and conservation initiatives. The Reserve was established in 2004 with the purpose of reintroducing fauna including the Arabian Oryx – or Maha in Arabic – and to protect native plants from grazing camels and goats.

Just before dusk, I went on a desert safari led by a conservation expert. The 4x4 bumped over sweeping, sandy plains as we searched for the elegant, white-furred antelope graced with grand horns as well as other desert-roaming creatures. Along with curious gazelle, we spotted a few lone oryx resting gracefully beneath the foliage of acacia and ghaf trees. After sunset, the creatures of the night emerged, and the rhythm of the cicadas echoed deeply as I gazed up at the star-speckled sky, free from light pollution and skyscrapers.

Early the next morning, we headed out before sunrise to witness the desert waking to the new day. We walked slowly, eyes on the ground, in search of small creatures and details that told stories of the life among the sandy landscapes. With the help of my guide, I spotted gazelle footprints and tracked the direction they were traveling, detected small insects moving beneath the swirls of sand, and picked the ripe, yellow fruits from buckthorn trees. As the sun gently rose, I was enveloped by the subtle stirrings of the desert and the endless rolling dunes; a reminder of a quieter, simpler era in the United Arab Emirates.

The best time to visit the UAE is from late October to early April. November, February, and March are the best months for outdoor activities when the weather will still be pleasant to hike and camp without the winds that are characteristic of December and January. I was there at the start of Ramadan, which impacts Dubai only to the extent that alcohol won’t be served until sunset. In Sharjah, however, every restaurant I went to was closed until sunset, making the eating situation there tricky.

Bring lightweight clothing with layers, as many places are air conditioned, and sturdy walking shoes if you plan to head to the desert or mountains. Dubai is quite modern in terms of dress but bring more conservative pieces if you plan to visit Sharjah. The good news is that if you forgot something, you’ll surely be able to find it in one of the many massive malls in Dubai.

How to get around the UAE

There are several options to get around the area. Ubers and Careem (a local, cheaper option than Uber) are abundant and convenient for travelling around Dubai and other major cities. If you want to take a day trip, investigate hiring a car with Udrive, an app that allows you to locate and pick up cars parked all around Dubai. 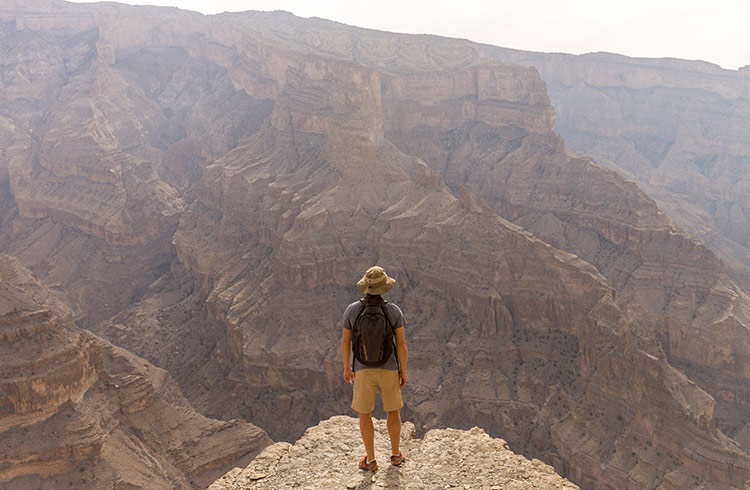 10 Days Driving Oman: Muscat to the Mountains and Back

On a 10-day circular road trip around Oman, Sarah Duff combines unmissable sights with a mixture of off-the-beaten-track adventures.

When her independent Emirati friend chooses an arranged marriage, Karin Louzado must reassess her own attitudes.