Away from the popular sites near Cairo, these lesser-known Egyptian temples and religious sites offer deeper insights into life in ancient Egypt.

Note: this article describes a trip that was taken before the COVID-19 pandemic. Some sites were temporarily closed due to COVID-19, but temples, archaeological sites, and museums were reopened to international visitors as of September 1. However, travel restrictions and safety precautions may be in place, including temperature checks and limits on the number of visitors.

Karnak Temple and the Valley of the Kings. Hot air balloons over Luxor and the Temple of Seti I. The ancient highlights of Upper Egypt have been a draw to international visitors since well before Thomas Cook introduced mass tourism to the country in the 1860s.

But away from the popular stops for big-bus tours and day-trippers from Cairo is a wealth of rarely-visited Pharaonic temples, markets, and religious sites that offer a more nuanced insight into ancient Egyptian life.

In my weeks of wandering Upper Egypt, from Luxor to the Sudanese border, these are a few of my favorites.

Temple of Hathor at Dendara

In a quiet village on the banks of the Nile, 30mi (50km) south of Luxor, I visit one of the best-preserved Pharaonic temples in Upper Egypt: the Temple of Hathor. A dark forest of massive columns towers above my head, leading me past carved reliefs that tell the story of successive rulers' sacrifices to the ancient Egyptian Gods, all under the watchful eyes of capitals carved in the image of the cow-goddess Hathor.

I creep along cold, dark, and ornately carved passages leading to the temple's rooftop shrines, where I’m treated to expansive views of the Egyptian countryside. Very few of Egypt's ancient buildings afford such a privilege.

The islands of Aswan: Seheil and Philae

Between the Nile-divided banks of the city of Aswan, Elephantine and Kitchener Islands are popular full- or half-day excursions featuring botanical gardens and small museums. While they’re busy with tourists, who are often overcharged by overzealous boatmen on the Aswan shore, two smaller islands upstream are just as worthwhile, but with fewer crowds.

I ferry across to small Seheil island, around 1.8mi (3km) from Aswan, primarily to see the 200 or more cliff-side carvings left by Nubian royalty, military leaders, and other VIPs who cruised along the Nile since the 18th century.

More interesting, though, are the tiny villages dotted around the island. Friendly residents offer warm invitations to step inside the colorful walls of their houses, to sit with tiny, strong glasses of tea for simple conversations on living and traveling and a bit about Nubian identity. These insights into daily life feel well off the beaten track.

Further from the city, by another quick boat ride, is the more famous of the two: Philae Island, about 5mi (8km) from Aswan on the far side of the old dam. As I climb the island’s banks to the Temple of Isis, one of many that were relocated by UNESCO before the completion of the new Aswan High Dam, the bustle of visitors reflects the site’s original purpose – this was one of the final, active pagan temples in the region after the arrival of Christianity.

Lingering till the late afternoon, a relative quiet descends, and I’m able to explore these storied ruins virtually alone. The massive carved walls, lit unevenly by the slanting sun, tell stories of Pharaohs defeating the enemies of Egypt, and the later Nestorian conversion of the space into chapels of the Christian God.

Deeper inside stands a stone shrine which once held a sacred boat, displaying the image of the goddess Isis, that made an annual journey from here down the Nile and back. Walking the temple's darkened halls feels like flowing through the eras of Egyptian history – only to return to bright sunshine and the persistent souvenir peddlers of the modern era.

An anomaly in a region of Egypt dominated by Pharaonic sites, the 7th-century Monastery of St. Simeon looks more like a fortress than a worship center; however, it was built as a home base for monks to travel into surrounding Nubia in an attempt to convert the region to Christianity. Visiting today offers little more than the impressive stone structure of the building, the once-vivid frescoes inside destroyed by the armies of Saladin in the 12th century, but the beautiful walk (I opt to ignore the many camel touts who offer a ride) through a strip of sparse desert is fittingly ascetic – evocative of the stark conditions those early proselytizers would have endured.

Animal husbandry has played a key role in Nubian life for more than 4,000 years, long before agriculture was widely adopted in the region. Still an important source of income for many local families, the largest livestock market in Upper Egypt is at Daraw, around 25mi (40km) north of Aswan. Walking into the market is chaos – an atmosphere of trader’s yells, animals’ cries, the smell of sheep; the market scenes of today could almost be mistaken for 100 or 1,000 years ago.

I stop for a fresh-roasted coffee at a small tent cafe near the center of the action – the calming crackle of roasting beans offsetting the bustle and noise just on the far side of a flimsy rope barrier. The market is busiest on Tuesday mornings, when vendors of sheep, goats, cows, horses, donkeys, and poultry join the fray, though it also operates on Sunday mornings as a camel-only market.

In the far south of Egypt, just 12.5mi (20km) from the Sudanese border, are two incredible temples carved out of the mountainsides of Abu Simbel: the Temple of Ramses II and Temple of Hathor. Like Philae temple, these were moved stone by stone between 1960 and 80 to save them from the rising waters of Lake Nasser during the construction of the Aswan High Dam. The modern temples were reconstructed with such precision that the sun still shines on the deepest statues inside the temple on Feb and Oct 22 each year – the dates of Ramses II birth date and coronation date, as they have since the temples were first built in the 13th-century B.C.E.

I visit in the pre-dawn – before the first rays of light break across the Nile, to shine on the waters that lap just meters away from the temples. Guardians approach in the quiet to offer whispered pleas for baksheesh – just a little cash to look the other way while I take forbidden photos, which I decline. Soon the moment will have passed – the arrival of daytrippers who fly from Cairo or drive in from Aswan or Luxor for a few hours' visit. But this early morning is (like late afternoons) free of crowds, and full of glorious light on the temple facades.

Dendara is accessible from Luxor by train (40 minutes ride and 15 minutes driving) or car (1.5 hours).

Both Seheil and Philae are reached by quick transfers from Aswan followed by short boat rides.

St. Simeon Monastery is just across the Nile from Aswan.

Daraw is a 40-minute drive or one-hour train ride north of Aswan; the market is a further 1.25mi (2k) from Daraw station.

Abu Simbel is a three-hour drive or a 45-minute flight from Aswan. Transport in Egypt: How to Get Around Safely

Egypt has so much to see and do, but distances between sights can be far away. Here's how to get around safely on your trip. 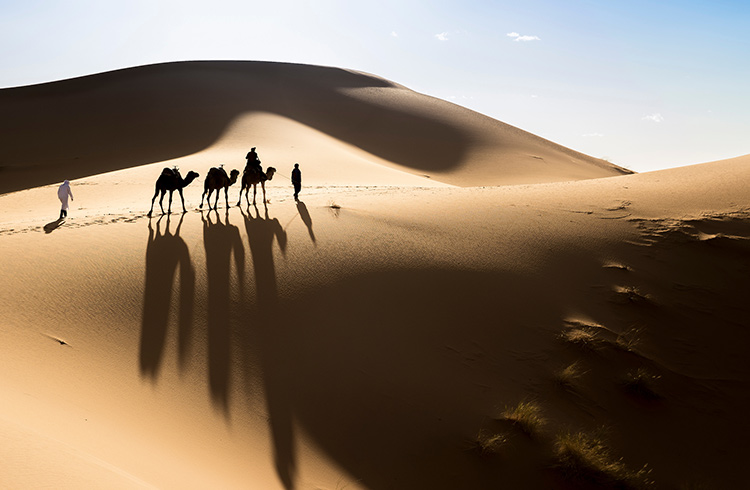 Is it ever OK to ride camels when we’re traveling, and how can we ensure we’re not harming them in any way?