This ancient Roman fortification stretches from coast to coast across northern England. As nomad Paola discovers, walking the length of it in the off season is challenging, exhilarating, and free of crowds.

Let me be honest first up: walking the Hadrian’s Wall path across England in winter is not for the faint-hearted. During the spring and summer walking season, the days are long, allowing for a leisurely pace, and the myriad picturesque villages and pubs that dot the 80mi (129km) route are open to welcome throngs of hungry, thirsty hikers. Winter is a different story.

In March of 2020, as COVID-19 began to rage, we decided to flee the madding crowd and walk the Wall in what turned out to be one of the wettest English winters on record. We hiked more than 15mi (24km) each day, sometimes in 50mph (80kph) winds, through rain and sleet, and ended up ankle-deep in icy mud more often than I care to remember. We ate our lunch on the hoof – you can’t stop and have a romantic picnic in mud – and I learned a few new skills out of necessity (not one public loo in the handful of villages we passed through were unlocked for out-of-season hikers.)

Walk with the wind

We decide to start on the west coast in Bowness-on-Solway and walk east, which means we are walking with the wind, not against it – and what a relief that turns out to be. Thankfully, we are also properly equipped with water-proof trousers, jackets, and boots, and I cannot stress enough the importance of good kit.

The path is maintained by English Heritage (signposts are marked by a white acorn), and takes us through stone stiles, a gazillion kissing gates, over small wooden ladders, and across stepping-stones through small creeks and flooded paddocks. We encounter quizzical sheep, a sky full of scudding clouds, and weather that changes from bright to stormy in a minute.

Hadrian’s Wall, a relic of the mighty Romans

There are areas where the view of the valleys strips our breath away, and the sheer might of the Roman Empire is visible as we see the Wall stretch out into the horizon, like a dinosaur spine hugging the hills and crags. The descent down steep stone steps to the incredibly photogenic Sycamore Gap and the climb back up is a favorite, as is the Birdoswald Roman Fort perched high above the River Irthing. Trekking along the river bend, through woodland and moss-covered logs, is beautiful in winter, but must be paradise in the warmer months. The fort itself is an intriguing stop: it once housed up to 1,000 soldiers at a time, and its perimeters offer a glimpse of just how immense the whole venture was.

The Emperor Hadrian ordered the Wall’s construction in 122AD. It took an estimated 24 million stones and 30,000 legionnaires some seven years to build, and became the most heavily fortified border anywhere in the Roman Empire. Archaeologists now believe that the wall was originally 10ft (3m) wide and between 16-20ft (5-6m) high, with a parapet on top. There is some evidence, too, that it was painted white, making its presence even more imposing in the hilly, verdant Northumberland landscape.

It seems incredible that this heart-stopping wonder of the ancient Roman world was pretty much forgotten for centuries – and could have disappeared entirely as farmers plundered its stones, taking it to build homes, churches, drystone walls, and even a road during the Jacobite rebellion. It wasn’t until the 19th century, when a local landowner, John Clayton, lobbied for its protection, and spent years and much of his wealth buying land that ran its length, that it was truly valued. Today, it has UNESCO World Heritage status and is a National Trail.

Where to stay along the route

We choose to stay overnight in the old Roman city of Carlisle in Cumbria; in Lanercost, near a crumbling and evocative priory constructed of Roman stone; in the wonderfully named Twice Brewed village (signposted as Once Brewed if you arrive from the east) which leads to the most exhilarating parts of the wall walk; and in Humshaugh before finishing the walk in Corbridge in Northumberland.

All our hosts are warm and welcoming, cook up a storm for breakfast, and provide a packed lunch for a small additional cost.

Dinner by moonlight in Tynemouth

The final, paved section through Newcastle, where the Wall is no longer visible, is a part of the usual itinerary, but we decide to skip it and take a train to the little seaside village of Tynemouth for our last night. Here, we clamber down 100 or so stairs to a surf beach by moonlight, and eat the most delectable, freshly caught chargrill fish dinner in an old sea container-turned-eatery that started as a pop-up and has become a beacon for foodies. It attracts queues a mile long in summer, but in winter, we get a seat (and a blanket) almost immediately, sit in front of our own tiny woodfire, and eat and drink like Viking kings.

If you walk the Wall in spring and summer, you will have much more choice of accommodation, eateries, and pubs, but in a world ravaged by the coronavirus, the off-season solitude is blissful, and the one couple we cross paths with waves happily from afar.

How to get there

Direct flights are available to Newcastle or you can travel by train from London.

Mickledore specializes in self-guided walking holidays and cycling trips for independent travelers. It booked our B&Bs, organized the pick-up of luggage each day, and provided our fantastic Cicerone guidebook and maps

What to pack and wear

Make sure your hiking boots are well broken in, and that jacket and trousers are both waterproof and windproof. A hat, gloves, and light, moisture-proof layers are helpful, as hiking long distances keeps you warm, but in winter, temperatures drop quickly, too. A light backpack containing water, high-energy snacks, and a battery phone charger were useful as well. 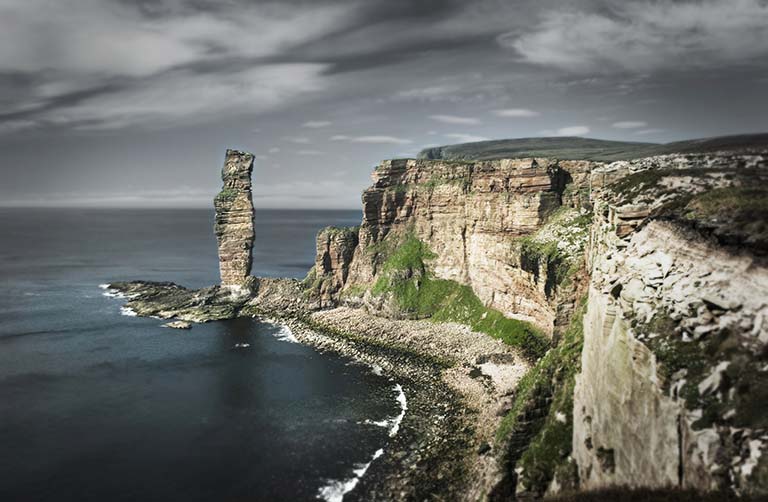 During the chilly winter months, crowds are few and the welcome is warm on this historic archipelago off the northeast coast of Scotland. Why do the locals in this UK village carry flaming barrels through town every November 5? The reasons are less important than the centuries of tradition it represents.