Juliette Siversten shares her favorite experiences on Stewart Island, from the best hiking trails to cage-diving with Great White Sharks, kiwi bird spotting, and a visit to predator-free Ulva Island.

Hailed for a real sense of isolation, New Zealand’s Stewart Island is ideal for nature lovers and adventure seekers. It’s tucked away at the southernmost end of the country, inhabited by only 400 people.

Stewart Island has numerous hiking trails, but the flagship track is through Rakiura National Park. It’s a 20mi (32km) loop along , through dense forests and past historical sites.

Stewart Island is the only place in New Zealand where Kiwi birds – the endangered national icon of the country – outnumber human residents (the human population is around 400). You might hear these nocturnal birds calling at night, but join a Kiwi spotting adventure with a local guide to try to see one in the flesh.

Stewart Island is a healthy habitat for our winged friends. Expect to share most of your moments with the curious Kaka, and listen out for the Bellbird, Tui and Grey Warbler among other species native to the region.

Stewart Island enjoys a diverse marine eco-system, thanks to a warm current from the Australian Great Barrier Reef. Temperatures range between 46–57ºF (8–14ºC), but visibility is outstanding and marine species thrive. The Paterson Inlet Marine Reserve has 170 species of seaweed and over 50 species of fish.

Protected in New Zealand waters, Great White Sharks are frequent between the stretch of water separating Stewart Island from the South Island.

Get up close and personal with these predators by taking a tour out into the heart of shark territory, and get dropped into a cage underwater to come face to face with the oceans’ second deadliest creature (contrary to popular belief, Killer Whales are the apex predator).

Regulation: Shark cage-diving operators were not regulated until 2014, after fears that operators using bait were changing the shark’s behavior.

Visit New Zealand’s smallest museum, run entirely by volunteers. The Rakiura Museum is modest, to say the but offers a unique insight into the history of Stewart Island, the early whaling community, muttonbirding, and Maori history.

Hear and watch the history of Stewart Island through a quirky and dated 40-minute film, narrated by a dog on screen. It’s light watching, but a fun and cheesy insight into the island in a tiny theatre.

The most famous local delicacy is or tītī. Stewart Island Maori have rights to gather muttonbird on 36 nearby islands, between April 1 and May 31 each year. The meat has a slightly salty taste to it, due to the bird’s fish diet and habitat.

Another New Zealand local seafood is paua, which has a brightly-colored blue and green shell. Try them both at Church Hill, which only serves locally produced food.

Know Before You Go

Tips on Getting to Stewart Island

Get to Stewart Island by a 20-minute flight from Invercargill or one-hour ferry from Bluff. A flight will cost a little more than the ferry.

It’s worth checking out flights into Dunedin as well as Invercargill to see what is cheaper. Be aware you’ll still have to drive about three hours to Bluff from Dunedin.

Accommodation books out quickly during the peak summer holiday season, between December–February.

There are several lodges and one pub-hotel in the sole township of Oban, but a bach or crib – local terms for a modest holiday home or beach house – may be more affordable. You can find them through Airbnb or New Zealand’s Bookabach website. 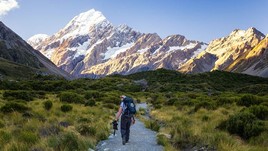 The Ultimate Guide to Road Tripping Around New Zealand

With so much to see and do spread across both islands, how are you going fit it all in? Our insider, Marta, shares her top tips on what vehicle to hire and itineraries to see the best of New Zealand. 8 Destinations to Put on Your South Island Itinerary

Follow the road less traveled on New Zealand's South Island, for an adventure-filled road-trip from the East Coast to the wild West Coast.