Work is underway to make flying more sustainable, and that’s good news for the planet and responsible travelers wanting to reduce their carbon footprint.

Now that we can book tickets, board planes, and fly just about wherever our heart desires, the world is once again becoming our oyster. COVID-19 aside, the only thing stopping many of us from reverting to our pre-pandemic travel habits is that little thing called climate change.

It’s hard not to feel guilty about taking off on a whim with the knowledge that flying is one of the most carbon-intensive ways to get around – 2-3 percent of global carbon emissions come from aviation, and the other gas and water vapor planes release when they fly contribute further to global warming.

Through initiatives such as Tourism Declares and Future of Tourism, key players in the travel industry have declared a climate emergency and called for a united approach to reducing emissions. At the UN’s 26th Climate Change Conference in November (COP26), some of tourism’s biggest businesses joined governments and destinations in committing to cut emissions in half by 2030 and achieve Net Zero by 2050.

The Glasgow Declaration is designed to help bridge the gap between good intentions and effective climate action. More than 300 tourism players have already signed up to the declaration, which commits them to file a climate action plan within 12 months and to report publicly on their progress and actions taken towards reducing emissions each year.

Dallas Fort Worth International Airport is the first airport to sign up, but it remains to be seen whether any airlines will become signatories – significantly reducing emissions remains a difficult challenge for the industry.

Airlines, airports and aircraft manufacturers are being leaned on to escalate efforts already underway to reduce the impact air travel has on the environment. The UN’s CORSIA scheme, agreed on by 192 countries in 2016, aims to ensure any rise in international aviation emissions above 2020 levels is offset elsewhere.

With air travel rebounding quickly after COVID-19, however, the race is on to come up with ways to reduce emissions in a big enough way that it counters growing air-passenger traffic. Passenger numbers are projected to double (from pre-pandemic levels) to 8.2 billion in 2037, but forecast improvements in aircraft fuel efficiency of 1-2 percent per year will not be enough to offset the expected traffic growth of around 5 percent per year.

Advances in aircraft design and technology are making planes more fuel-efficient, and improved procedures and operations at airports are reducing fuel burn, but the most effective way of reducing emissions is to use sustainable aviation fuel.

The World Economic Forum’s Clean Skies for Tomorrow coalition of airlines, airports, fuel suppliers and other industry stakeholders, is working to accelerate the supply and use of sustainable aviation fuel. There isn’t enough available, and what is available is expensive – costing two to four times as much as conventional jet fuel.

United Airlines is one of the airlines working to become carbon neutral by 2050, but as United’s global environmental affairs and sustainability general manager Lauren Riley points out, government incentives will be required to close the price gap and drive up the supply of sustainable aviation fuel. “Until that happens, we're going to continue to struggle with replacing conventional kerosene with sustainable alternatives.”

Currently, sustainable fuel accounts for less than 1 percent of the total fuel United Airlines burns, despite being ahead of the sustainable-flying curve.

Alternative fuels may be an effective way of reducing emissions, but so is switching to modes of transport that don’t rely on burning fuel at all – solar-electric planes, for instance.

On his blog, GatesNotes, Bill Gates writes: “How exactly do we fuel our need to move around without emitting greenhouse gases? The answer is simple, even if making it happen won’t be: use clean electricity to run all the vehicles we can, and get cheap alternative fuels for everything else … These technologies need to get much cheaper than they are today. That means finding ways to manufacture them at scale and to make sure they perform comparably to their fossil fuel counterparts.”

The good news is that electric and hybrid aircraft projects are underway – Airbus and Boeing are among those working to innovate them – and small electric and hydrogen-powered planes are already being trialed in Scotland.

Airbus is working with Air New Zealand to introduce hydrogen-powered aircraft to its fleet by 2030, and Norway hopes to transition to all-electric aviation by 2040, recently announcing plans to put a nine-seater all-electric commuter plane in the air by 2026.

A solar-powered aircraft has already circumnavigated the globe, and its creator (the Solar Impulse Foundation) is now helping to fast-track more than 1300 other solutions to environmental challenges – all without compromising economic growth.

Airports too, are innovating as they strive to become carbon neutral. There are 124 airports worldwide mapping their carbon footprints via the Airport Carbon Accreditation program, and there are now more than 50 carbon-neutral airports in Europe alone.

Eco efforts on board

Airports and airlines are jumping on the sustainability bandwagon in what’s likely just as much a public relations opportunity as it is an opportunity to go green.

Etihad, Singapore Airlines, Delta, American Airlines and United Airlines are among the carriers moving away from single-use plastics – they’ve ditched plastic straws, packaging and drink stirrers from aircraft and lounges in favor of biodegradable alternatives.

Air New Zealand, meanwhile, is trialing birchwood and bamboo service ware in a bid to remove 28 million single-use plastic dishes and cutlery items from the waste it generates inflight every year.

Air New Zealand has been working to reduce single-use plastics since 2018, but chief customer and sales officer Leanne Geraghty says the pause in travel caused by COVID-19 has given the airline a chance to accelerate some of that work. “We want to build back better than before and moving towards more sustainable alternatives inflight is a key focus area of our strategy,” Geraghty says.

How many times have you left a half-eaten meal on your tray, or a plastic-wrapped muffin unopened? In a typical year, the International Air Transport Association says 20-30 percent of the 6.1 million tonnes of cabin waste airlines generate is unconsumed food and drink.

To reduce waste (and expenses), Japan Airlines now gives passengers the option to say no thanks to onboard meals before they fly, and Virgin Australia has scrapped complimentary food in economy. Etihad and Emirates are putting artificial intelligence and image recognition to use to pinpoint which inflight food items are least popular and adjusting what they offer accordingly.

Many airlines have also partnered with food banks and food-rescue charities to donate leftover meals, snacks and fresh produce that would otherwise go to waste. SouthWest, American, Virgin and Qantas are just some of the airlines redirecting unused food to charities such as OzHarvest and Feeding America.

What you can do

We all have a part to play in making travel more sustainable, including how and when we fly. Here are five ways to fly greener: In this episode, flying during COVID-19, how to get the cheapest seats to the best destinations and what your airport experience looks like in 2020. 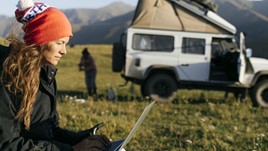 Cover your tech while you're working or travelling overseas.