An awkward father-son trip to La Mina Falls in Puerto Rico highlights the connections we make (and don't make).

Our day began at 6:30 in the morning. Still half asleep, we shuffled into an unmarked white van, which transported us from our hotel in San Juan, Puerto Rico to the El Yunque National Rainforest. I spent the 45-minute drive fighting the throes of sleep and watching the sunrise over the mountains.

The second the van parked, my dad hopped out and hit La Mina Trail. He had one destination in mind: La Mina Falls. I jogged along behind him, struggling to keep up. My father is an experienced hiker. He grew up in the Appalachian Mountains, where he spent his childhood camping and tramping around the great outdoors. I grew up in Orlando, Florida. I only ever went camping once, and it was at Disney World. So, while my father kept his hike at a brisk, nonchalant pace, I felt like I was sprinting just to match his stride.

My dad and I aren’t exactly close; we’ve never had anything deeper than a superficial father-son relationship. I imagine he shared the same surface-level connection with my grandfather, who had spent a good deal of time traveling to San Juan for work in the 1960s, or so the legend goes. When he passed in 2015, my dad, in what was an attempt to reconnect with a man he never fully knew, planned out a trip to retrace his father’s footsteps in the Caribbean.

The trail was a beauty onto itself. Absorbed in lush tropical trees, the forest was silent, save for the occasional squawk from some far-off bird, or the slight whistle from a hidden coqui frog. Even though this trail was one that many had walked down before, it felt like we were the first to ever explore it.

When we finally stumbled upon La Mina Falls, I was exhausted, but not too beat to take in its contemplative beauty. Cascading water poured over jumbled rocks, down a 35-foot (10-meter) drop into a serene pool. My dad kicked off his shoes and began wading in the water.

I’ve never been fond of cold water – I couldn’t imagine jumping into a pool without dipping my toe in first. If the temperature isn’t to my liking, I’m not going to launch myself from the pool’s edge like a cannonball. I’m the type of person who takes their time easing into the water, lowering myself step-by-step, and allowing my body to acclimate to the icy depths.

My complicated relationship with water stands in direct opposition to my dad, who I don’t think has ever looked before he leaped. It might be hard to imagine it when you look at him now, for all you will see is an out-of-shape computer technician, but in a past life, he was a whitewater raft guide from the mountains of West Virginia. I’ve seen pictures, and I’ve heard stories, but I never lived in that world with him. I wasn’t raised on the river like he was. Shortly after I was born, we relocated to central Florida, far away from the rapids of my father’s youth.

While I was sitting on a rock taking in the views, my dad was already knee-deep in the water and sinking fast. The surface quickly surpassed his knees, chest, then head – he was like a submarine submerging to the bottom of the ocean.

He paused his descent, looking over at me and realizing, perhaps for the first time, that I had accompanied him into the forest. He waved his hand at me, and I kicked off my shoes. Approaching the pool’s edge, I knew if I dipped my toe I wouldn’t get in. So, not completely without hesitation, I plunged into the freezing water like a cannonball, where a confusing combination of accomplishment and regret washed over me.

When I broke the surface, gasping for air and warmth, I caught my dad staring at me. Backsplash from the falls hit him in the face, sending water droplets rolling down his cheeks.

“Your grandfather brought me here once when I was a kid.” His voice trailed off.

Before he could say anything else, he gulped down a deep breath and sank beneath the falls.


This story was a winning entry in the World Nomads Travel Writing Scholarship 2020.

A winner of the World Nomads Travel Writing Scholarship 2020, Morgan Campbell is a writer originally from Cincinnati, Ohio.

The Love That I Have for You

Searching for the real Cuba, scholarship winner Evangeline Yong finds that she herself is an object of curiosity. 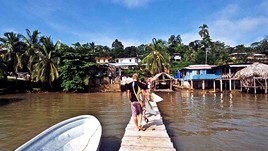 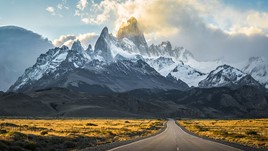