In northeastern Ethiopia, the African and Asian continents are slowly ripping apart, creating a surreal realm of lava lakes and colorful hot springs. Alicia Erickson explores this hostile but beautiful terrain that feels more like Mars or Venus than planet Earth.

The sky fades into the cracked, white salt flats as our 4x4 speeds deeper into the Danakil Depression, an inhospitable region in northeastern Ethiopia – and the hottest place on Earth.

Arriving at the Danakil Depression

After an early morning reunion in the Addis Ababa airport, Jenny – my former housemate in Rwanda – and I fly to the town of Mekele. Located in the Tigray region of northern Ethiopia, Mekele serves as the starting point for travel into the Afar region in the remote northeast. Here, close to the Eritrean border, lies the harsh, otherworldly desert plain known as the Danakil Depression.

Bleary-eyed, we find our way to the Ethio Tours office. There, we meet our guide, Yousef, who will lead us on a three-day expedition into the Danakil Depression. A proud local of the Tigray region, Yousef has been guiding trips across Ethiopia for close to a decade.

Due to government protection of the region  – to safeguard the sacred tribal land of the nomadic Afar people  – it’s necessary to be accompanied by a guide. But despite the proximity to Eritrea, there’s no concern about political violence. Traveling with a guide also ensures safe travel in extreme heat and into an isolated region with minimal infrastructure.

Part of the “Afar Triangle,” in the far northern reaches of the Afar region, the Danakil’s hostile landscape has an extraordinarily unique topography. The depression, lying at 430ft (130m) below sea level, was created millions of years ago, as three tectonic plates beneath the African and Asian continents slowly began to split apart. Salt flats, colorful sulfur lakes, and volcanoes have emerged as a result. The uncovering of ancient fossils in the depression suggest the origins of human species can be traced to this region.

Yousef turns on his eclectic playlist, ranging from Afar tribal music to American rap, as we set off on our long journey. Our jeep curves along mountainous highways, bypassing camel caravans. The deeper we go, the more rugged the terrain becomes. We bump over rock, lava, and sand – intermittent huts and camels interrupt the otherwise barren landscape.

After a long day of driving, we stop in the remote village of Dodom, where we join other groups traveling in the Danakil. We feast on a simple dinner while watching the sun sink behind the low hills, then begin our six-mile, evening hike to Erta Ale, a volcano containing the oldest of the world’s very few lava lakes. Hiking at night is much cooler, and improves the chances of seeing the lava, which is easier to see in the dark.

The trek is slow and methodical. Carefully placing one foot in front of the other in the dim beam of my flashlight, I make my way across rocky terrain and up to the volcanic crater in the thick of night. A team of camels and local Afar guides lead the way. Almost entirely free of light pollution, the night sky is bright with the glow of thousands of stars.

After about three hours, we approach the summit. As we make our tedious descent down the escarpment to reach the viewpoint of the lava lake, I begin to cough, choking on a potent sulfur that clogs the air. Due to limited volcanic activity at the time of our visit, the lava can’t be seen. Tired, underwhelmed, and struggling to breathe, I welcome the sight of our makeshift beds set up on the rim of the crater. Unprepared for the smell of sulfur, I use a scarf I had brought for a pillow to cover my mouth.

After just a few hours’ sleep, interrupted by the intermittent grunting of the camels, we wake in hopes of seeing the glow of the lava lake before sunrise.

“Depending on the volcanic activity, sometimes the lava glows bright red and orange,” explains one of our guides. “A few years ago, there was even a small eruption, where lava shot into the sky!”

Walking down the path again, we discover that the crater is encircled by a thick fog, hiding the lava entirely. But, as the sun slowly rises, it reveals a Mars-like panorama. I climb up and across massive cliffs for views of craters and otherworldly rock formations.

After sunrise, we start the trek back to Dodom. Although not a physically challenging hike, I grow weary after hours of walking under the increasingly hot sun. Yousef is waiting at camp with buckets of cold water: a welcome sight.

“Desert shower!” he exclaims in delight, as he soaks both Jenny and me, refreshing us for another day of travel in the Danakil Depression.

By afternoon, we’ve reached Lake Afrera, a saline lake mined for rock salt. We take a dip in the densely salty waters, floating amid a palm-lined oasis. At around 335ft (102m) below sea level, Lake Afrera is home to the lowest-lying island on Earth.

On our final morning, we set off early for the most anticipated part of the Danakil: the colorful, hot brine springs of Dallol. The jeep glides across expansive salt flats, gleaming with pools of water. We stop off in Ragad, where Afar men mine salt and load bricks onto camels for transport across the desert and distribution throughout Ethiopia.

Periodically, we pause to explore areas dotted with salt lakes, tinted blue-green and rusty-red below thick layers of salt. We walk through mini-cities of statuesque salt structures. And then we reach Dallol, characterized by brilliantly colored hot springs composed of salt, iron, and sulfur deposits.

Yousef explains the complex science behind this phenomenon. Hot magma below the earth heats water flowing down from the surrounding highlands. The water moves upward through mineral deposits, emerging as brine through openings in the floor of the volcanic craters, and forming the colorful sulfur pools.

Left to explore the area for the morning, I wander across extraterrestrial-like landscapes and over lava rock flooded by pools of brilliant yellow. Tiers of aqua-green sulfur lakes are stacked against jagged, rust- and mustard-colored formations. The springs are acidic and highly dangerous to touch, though safe to walk between. I relish the rare treat of exploring a far-flung locale unlike any other.

Too soon, we climb back into the jeep one last time. The lonely desert fades into the distance as we drive back towards Mekele. Roads, buildings, and mountains slowly rise onto the horizon, leaving the vast emptiness of the Afar region behind.

In just a short few days, it feels as if we’ve visited the farthest reaches of the planet, more reminiscent of Mars and Venus than Earth itself. The Danakil Depression is a worthy journey for any adventurous soul.

The Danakil Depression is best visited in winter months (November-February) when temperatures will be more tolerable.

A sturdy pair of shoes or hiking boots for walking along the volcano and the sulfur lakes; a headlamp; a lightweight scarf or bandana to cover your mouth when at the volcano; and all essential toiletries including face/hand wipes and toilet paper. Note that there are no shower facilities and very intermittent bathrooms during the three-day journey.

Hear more from the author, plus learn about Ethiopia's rare wildlife, its history, and what makes it such an unusual African destination. 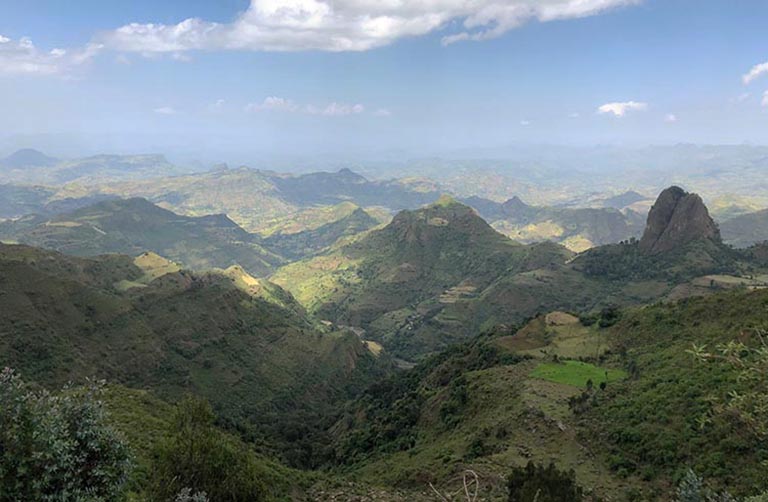 Rare Wolves and Rock Churches in the Ethiopian Highlands

The Ethiopian Plateau is a region of Africa unlike any other, home to golden-maned monkeys, Ethiopian wolves, and ancient, frescoed churches carved from rock. Women’s Safety in Ethiopia: 8 Things I Wish I Knew