Kyoto, being Japan’s first capital, is rich with history and tradition. With so much to do, we asked local insider, Bjorn, to count down his list of the absolute must-see and must-do activities in Kyoto.

Starting off this list is slightly off-the-beaten-path Sanjusangendo, located east of Kyoto Station. Founded in 1164, this temple is famous for its 1001 statues of the goddess of mercy, Kannon, in the 120m wooden hall.

The name literally translates to “33 intervals”, the traditional method of measuring the size of a building and definitely an impressive sight to behold.

The International Manga Museum, or rather library, features a collection of over 300,000 manga that you can read at your leisure. Don’t worry if you can’t read Japanese – about 1,000 of these are in English.

Ryoanji is famous for its gravel-and-rock Zen garden and is generally regarded as the finest expression of Zen. As you’re seated on the deck of the head priest's former residence, you won’t be able to see all 15 stones in the garden. There’s a lesson there somewhere!

Nanzenji is the head temple of one of the schools within the Rinzai sec of Japanese Zen Buddhism and includes an impressive network of interconnected sub temples.  Its spacious grounds and ancient wooden architecture is one-of-a-kind. In autumn the grounds are especially rewarding as the surrounding forests change colours, transforming the scenery.

Located on the western outskirt of Kyoto, Arashiyama is a popular destination to enjoy nature and the soothing air flowing over the river.

If you’re a fan of Instagram, you would've seen many beautiful shots of this location. Its famous bamboo grove lets you wander in a mystical forest, through which you won’t even see the sky.

Only a few hundred meters away from Kyoto's Imperial Palace, Nijo Castle was built as a symbol of power for the shogunate – feudal Japan’s last military government. With floors that squeak when you step on them (called “nightingale” floors), and hidden guards stationed throughout, the Castle was designed to impress anyone who would come for an audience.

Inspired by its golden sibling, Kinkakuji, Ginkakuji was so named not just as a contrast to Kinkakuji, but the moonlight reflecting on the building’s dark exterior was said to give it a silvery appearance.

The temple was designed to be the retirement villa of an art-obsessed shogun, and was an important centre of the then contemporary culture, responsible for refining the art of tea ceremony, flower arrangement, garden design and more.

Take in the serenity of the moss garden and enjoy the zen of the grounds as you walk along the circular route.

The pavilion used to be part of a vast retirement residence for shogun Yoshimitsu, but it was converted to a Zen temple after his death. The pavilion’s top two floors are completely covered in gold leaf and perched on the edge of a large pond, it’s a sight to behold.

The building was built to echo the extravagant Kitayama culture that developed in the wealthy aristocratic circles of Kyoto during Yoshimitsu’s times, with each floor designed in a different architectural style.

The “Temple of Pure Water” is a popular sight throughout the year as visitors are drawn in by its impressive architecture. Kiromizu-dera is best known for its wooden stage, built in 780 and made entirely without nails.

We definitely recommend checking out it’s stunning views over Kyoto during Cherry-Blossom Festival or late Autumn, as it’s the perfect spot to take in (and photograph) the hundreds of cherry and maple trees in the valley below.

Voted as Kyoto’s #1 attraction, Fushimi Inari Taisha’s uncountable visitors make their way through its equally countless vermilion torii gates towards the sacred Mt Inari, dedicated to the Shinto god of rice. Foxes are said to be Inari’s messengers, resulting in the many fox statues watching over the visitors throughout the grounds.

Its tranquillity, charm, and above all, beauty, make it hard for anyone to deny its sheer attractiveness.

Want to discover the best of Kyoto’s nightlife, street food and places to go hiking?
Get our FREE Japan Survival Guide to find out how! From Arashiyama and Kuramadera, to a day trip to Sanzen-in, explore the best of Kyoto’s outdoor spots and adventures with our insider picks. 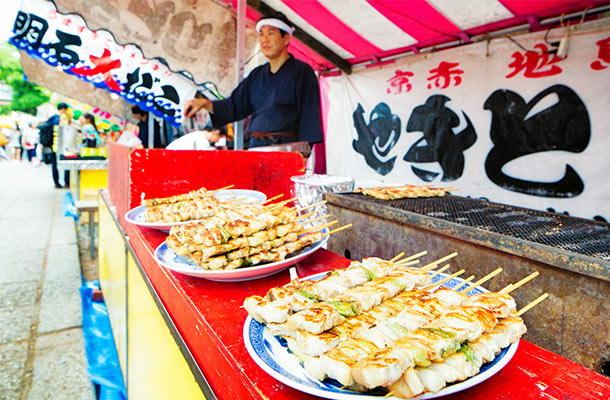 Kyoto’s Top Foodie Experiences You Have to Try

In search of the best food in Kyoto, we discovered some of the best culinary delights. From local styled sushi, the flavours at Nishiki Market, the delight of yatsuhashi to the traditional excellence of kaiseki, Kyoto truly is a culinary capital. Kyoto in One Day: See This Ancient Capital in 24 Hours

Overwhelmed by the number of temples and shrines in Kyoto? Lauren Smith shows you how to see the best of this magical city in just one day.