6 Less-Touristy Greek Islands You Must Visit

Looking for somewhere quiet and unspoiled? Greek native Valentini Argyropoulou offers her tips on the best islands for getting off the beaten path, from relaxed Ikaria to UNESCO-listed Halki.

When I was little, I had a big dream: to travel to every Greek island. This didn't come out of thin air, since I am Greek, but let's not judge a child’s dream. I’ve managed to visit 53 so far, and here are some of my favorite, lesser-visited Greek islands for travelers who like to go off the beaten track.

Kimolos, the little gem next to famous Milos island, derives its name from the Greek word kimolia (chalk) because of the off-white argyle clay powder that can be found everywhere on the island, including on the beaches. This type of chalk is renowned for its cleansing and pharmaceutical properties since ancient times, and the locals have been trading it ever since.

Kimolos’ unusual geological formations have blessed it with rare natural beauty and, consequently, a unique history; check out the archaeological and folklore museum in Horio, or hike to Skiadi, the famous “mushroom rock”.

Locals have showcased this volcanic landscape even more by building typical, Cycladic white houses and chapels with blue windows, and characteristic cobblestone streets along with colorful boathouses in the Syrmata area.

My favorite beach? Undoubtedly, Prassa with its turquoise seawater and powder sand; you can also swim to the Prassa-islet across the bay and wander around the abandoned buildings. Other beautiful beaches include Ellinika, to admire the submerged ancient ruins (snorkel and mask required), Bonatsa, Alyki and Mavrospilia for the sunset.

Most people visit Kimolos from Milos on a daily boat tour, but I recommend spending more than a few hours here. The island doesn’t have an airport, but you can fly to Milos and take the short ferry ride to Kimolos. Alternatively, the direct ferry from Piraeus will take between five and eight hours.

The first time I saw Irakleia port, I was impressed by the crystal-clear water and the locals at the nearby beach who were enthusiastically waiting for the ferry to cause some waves just for them. There’s always something special about islands ports, but this one was uniquely welcoming.

Named after the Greek hero Hercules, Irakleia is a tiny Cycladic island with around 100 permanent residents. As a result, there are few facilities for visitors (as few come), and the place has maintained its authenticity.

Irakleia is a very walkable island with easy access to beaches, and as well as the port area, I highly recommend Alikias for snorkeling and Livadi for its laid-back atmosphere.

Lastly, don't miss the hiking trail between Panagia village and Aghios Ioannis, where you can enjoy the largest cave in the Cyclades region at your own pace.

There is no airport on the island, but you can fly to nearby Naxos and catch the ferry from there. There is also a direct ferry from Piraeus a few days a week, taking around eight hours.

The butterfly-shaped island of Astypalaia lies in between the Cyclades (where Mykonos and Santorini are found) and the Dodecanese (where Rhodes and Kos are) and, though it technically belongs to the Dodecanese, is blessed with the gorgeous aspects of both.

I fell in love with this unique combination, and with Hora/Chora*, Astypalaia's main village. Built at the highest point of the island, next to a 13th-century Venetian castle, Hora offers the quintessential experience of an authentic Greek summer. At the annual 15 August celebration of the white-painted Church of Panagia Portaitissa, next to the castle, you may even be offered a free dinner by locals.

Although the beaches are not the main reason to visit, there are some worth mentioning such as Livadi, Kaminakia, Vatses, and Agrelidi. In summer, local boats deliver visitors to the surrounding islets, too. And there are around 20 signposted hiking paths (beginner to advanced level), some leading hidden beaches and caves.

Reaching Astypalaia is relatively easy thanks to the small airport with direct flights to and from Athens. However, flights can be pricey, so you might consider taking the ferry from Piraeus port in Athens (an eight-hour journey).

UNESCO characterizes Halki as “the island of Peace and Friendship” and it’s a well-deserved name. This tranquil island, part of the Dodecanese island group, doesn’t have an airport, but can be reached by ferry from Rhodes in a couple of hours, from Crete (around eight hours), and other surrounding islands. The ferry ride from Piraeus may take over 22 hours and, though I’ve done it as an affordable way of traveling, might not be worth your time.

Nemporio is the only village, home to 300 residents, with guesthouses and homestay options. I really liked the beaches (especially Pondamos, with its ultra-clear water), the renovated, Italiante mansions (dating from the era of Venetian rule, around the 13th century), and the windmills on the western side of the island, overlooking the port.

In summer, a minibus picks up and drops off people to the beaches and other points of interest; if you’re up for hiking, ask the locals about the abandoned pirates’ village.

Known for its inhabitants' longevity, Ikaria is one of the most exceptional Greek islands. Its name derives from the myth of Ikaros (Icarus), who escaped Crete on wings made of wax and feathers, only to fly too close to the sun and fall to his death in the Icarian Sea. Located in the Eastern Aegean archipelago, Ikaria is a place to de-stress, and forget unnecessary commitments – as Ikarians do. Don't be surprised if you can’t find any stores open after lunchtime – everyone is taking a nap.

The island offers mountains and sea along with activities such as surfing (Messakti beach), camping, and hiking (Nas Gorge and Nas beach are gorgeously wild). I particularly love the radioactive (safe levels – don’t worry) mineral springs and thermal spa at Therma village, and the summer fiestas where people dance the local ikariotiko all night long, in contrast to their relaxed daytime lifestyle. Not to be missed, even if you don’t know how to dance.

Ikaria’s airport offering direct flights to/from Athens, Thessaloniki, and some surrounding islands. It’s also one of the few Greek islands with more than one port; useful if you’re planning an island-hopping itinerary. The direct connection from Piraeus takes around six hours.

I’ve always found it strange that, even though many travelers visit Delphi (one of the most famous ancient Greek sites), few make it to this hidden little island just 1hr away. Trizonia is the only inhabited island in the Corinthian Gulf and is just 550 yards (500m) off the Greek mainland, west of Athens.

Getting to Trizonia is relatively easy by road as far as the village of Hania / Chania (155mi/250km from Athens, 47mi/75km from Delphi), from where the boat trip takes five minutes. Plus, the coast route from Delphi to Hania is especially beautiful, so it’s worth the effort even for a short stay.

Trizonia feels busy, yet serene, probably because cars, motorbikes, trucks are strictly prohibited here – such a pleasant surprise. Perfect as a place to unwind, Trizonia is only comprised of the village/port and three or four beaches reached on foot within around 20 minutes. If you only have one day on the island, head to Pounta Beach to enjoy its rare, reddish pebbles.

Trizonia has limited accommodation options, so book your stay well in advance, especially if you plan to be here in August, the busiest period of the year.

*Note: Often, place names such as Hora or Horio will appear on English-language maps as Chora or Chorio. Be aware that the word is pronounced with an “h” as in “hotel”, rather than a “ch” as in church or a “k” sound. 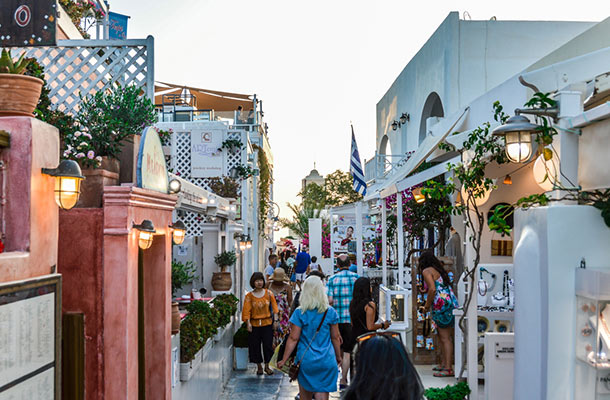 With picturesque island sunsets, distinct architecture, delicious food, and ancient history, Greece is a popular European travel destination. Find out just how much you can squeeze into your summer holiday on a budget with these tips from a traveler.