Green Adventures in the Canary Islands

Nomad Emma shows us the eco-friendly side of this Spanish archipelago as she hops by ferry from island to island, cycling, windsurfing, whale-watching, hiking, and sampling the local food.

The Canary Islands wears its volcanic origins on its sleeve – but it has a green side too, both literally and metaphorically. Island-hopping around this Spanish archipelago by ferry, I discovered secret coves, scenic cycle routes, idyllic swimming spots, eco-friendly villas, and skies studded with stars.

Maybe it’s the quiet roads and steady climbs. Or perhaps it’s the wild, arid scenery: a rare mix of volcanic peaks, rocky slopes and lichen-strewn lava fields, so otherworldly, they feel like the set of a sci-fi movie. Whatever the reason, hardcore cyclists – the sporting fraternity’s self-appointed elite – love Lanzarote. And the island loves them back, organizing training sessions and multiple events, from a bike week for fit over-50s to four-day mountain bike rallies and an Ironman so grueling, it counts towards qualification for the world championship in Hawaii.

Me? I’m no athlete, elite or otherwise. But I love cycling, so I’d hatched a plan to jump start my Canaries island-hopping trip by renting a bike and joining the spandex-clad enthusiasts who tour this rugged, multi-faceted island on two wheels.

You need to watch out for the wind, they told me. They weren’t wrong. It was November, and while this is by no means the gnarliest month, the 15mi (24km) per hour Atlantic breeze certainly whipped me into shape. Pedaling northeast, against the blast, was tough. But fortunately, Lanzarote is blessed with some great spots to pause for breath – pretty villages, panoramic viewpoints, and hidden coves, along with intriguing 20th-century art centers designed by local creative genius César Manrique. And when at last I was zooming southwest with the wind on my back, I felt invincible.

Chilling out on Fuerteventura and Gran Canaria

Bidding farewell to my bike, I hopped on a ferry from Lanzarote’s southern tip to Fuerteventura, the next island in the chain. Here, the Atlantic breeze felt like a strong but friendly force, ready to be harnessed. Dotting the terracotta landscapes are historic, Castilian-style windmills that once kept the locals well-fed on gofio, Canarian flour made from grains that are roasted before they’re milled to enhance their flavor and shelf-life. Signing up for windsurfing lessons at one of the island’s laidback training centers, I spent my mornings riding the breeze and my afternoons on Fuerteventura’s long, lovely sands, cooled by the restless air.

I continued west by ferry to Las Palmas de Gran Canaria, the archipelago’s largest city and the capital of the island of Gran Canaria. Bustling and cosmopolitan, with modernist blocks rubbing up against elegant apartments with filigree balconies, it feels very much like a Spanish city that’s broken free from the mainland and floated gently southwest, picking up traces of other cultures on the way. Catching a bus out of town, I followed Gran Canaria’s northern shore to Las Salinas de Agaete, to swim in one of three natural swimming pools sheltered from the open ocean by battlement-like columns.

After that, utterly refreshed, I settled down with a Tropical beer to watch the sunset.

Getting close to nature on Tenerife and La Gomera

It’s only 80 minutes by ferry from Agaete to Las Palmas’ lively cousin, Santa Cruz on the island of Tenerife. In the run-up to Mardi Gras in February, the city thrills with whistles and the thump of carnival drums. It’s always fun to be in Santa Cruz, even out of season, but I was keen to head back out to sea, so jumped on a bus to Costa Adeje, where a whale-watching catamaran was waiting.

The captain had promised us a sighting or our money back. It sounded like a lot to expect, but who was I to argue? Infected by his confidence, I scanned the middle distance for diving seabirds – a sure sign that whales or dolphins may be present. Ten different cetacean species are regularly spotted in the deep channel between Tenerife and its little neighbor, La Gomera, with pilot whales and bottlenose dolphins resident all year round. Sure enough, a pod of dolphins was soon slicing through the water just beyond our boat.

With La Gomera beckoning, it was time for another ferry trip: from Los Cristianos to San Sebastián, Christopher Columbus’ last stop in the known world before traveling to the Americas. Climbing up to Garajonay National Park in a rented electric car, I hiked along the steep, misty paths that weave through La Gomera’s UNESCO-listed laurisilva (or laurel forest), a mysterious, mossy pocket of green.

Throughout my trip, I stayed in casas rurales: characterful village apartments and villas outside the main tourist resorts. Some were former farm buildings, spruced up with eco-friendly touches. Waking to views of age-worn lava or sapphire-blue seas, I would start the day by padding outside with a bowl of local figs, bananas, or pineapple, bought fresh the day before. Come lunchtime, I’d eat like a local, dipping papas arrugadas (salty little potatoes) into mojo, a piquant sauce rich in olive oil. On my sixth island stop, La Palma, where world-class chefs conjure up delicious dishes based on parrotfish and moray eels, I tucked into a vegan version of puchero canario, a classic island stew stuffed with colorful vegetables, pulses, garlic, cumin, and herbs.

From La Palma, I sailed back to Los Cristianos for a ferry to the smallest and remotest of the seven main islands in the chain: El Hierro. It’s a UNESCO World Biosphere Reserve and Geopark, with big ambitions, sustainability-wise: its wind turbines and hydroelectric plant are designed to harness and store enough renewable energy to supply its entire population of around 11,000. On this clean-living island, light pollution is impressively low; so much so that, during my visit, the night skies seemed even more vivid than those over Tenerife and La Palma, both of which have international astronomical observatories.

Of El Hierro’s many dark-sky spots, the clifftop near Orchilla lighthouse is one of the best. As I gazed up at the infinite constellations, Taurus shone brightly in their midst: the bull, a symbol of Spain itself, strutting proudly across a star-speckled field of deepest blue.

There are direct flights to the Canaries from European cities, and ferries from Huelva or Cádiz in Spain with Naviera Armas, Fred Olsen, or Trasmediterránea (27-55 hours, depending on where you depart from and which island you’re heading to). You can island-hop with the same ferry companies, or by plane with Binter or Canaryfly. Sea voyages between adjacent islands take between 25-150 minutes. It’s easy to rent a car on any of the islands.

The best times for cycling and walking in the Canaries are January to May and October to December, when the school holiday crowds have subsided and the weather is mild. For windsurfing and kitesurfing, April to September is breeziest and therefore best, but it’s not until later in the year that the surf picks up. Meteor showers peak in August. Casas rurales (rural self-catering accommodations) typically cost US $17-70 / €15-60 per person per night. 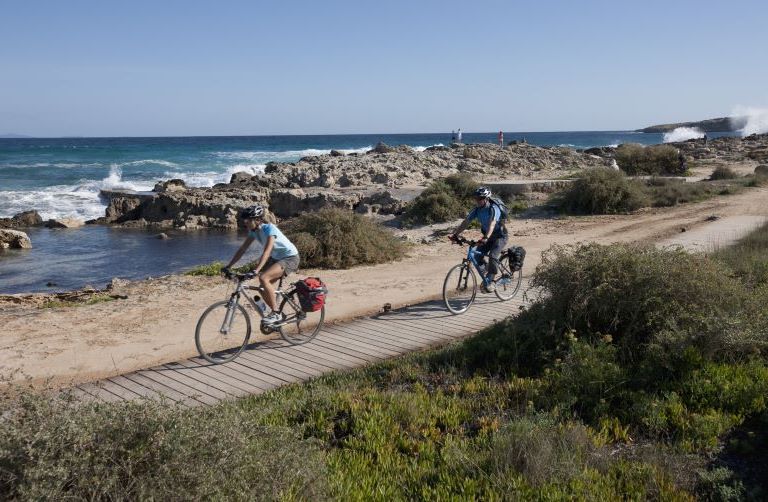 Finding Tranquility in the Balearic Islands

A ferry crossing from the Spanish mainland is a great prelude to an eco-friendly island-hopping trip, discovering the calmer, greener side of Mallorca, Menorca, Ibiza, and Formentera.