In Southeast Asia the rain dance isn’t dead, it’s just been juiced up with some high-powered bamboo rockets.

Throughout Laos and northeastern Thailand.

Usually on the May full moon.

The pre-Buddhist rain ceremony can be one of the wildest festivals in Laos or northeastern Thailand, with music, dance, folk theatre. Processions and general merrymaking. On the third and final day, bamboo rockets are launched into the sky in an attempt to kick-start the rainy season and bring much-needed water to the rice fields.

Behind the serious business of rain-making is the competition to be the local Roger Ramjet. The team whose rocket goes the highest is declared the winner; for anybody whose rocket doesn’t get off the launch pad it’s tradition to dump them in the mud.

Vientiane is a good place to see Bun Bang Fai, while in Thailand it’s celebrated best in the town of Yasothon.

1 - join the crowd and watch the rockets fly.

Dates vary from village to village, and town to town, so check ahead with tourist authorities as to festival dates. Buses for Yasothon leave from Ubon Ratchathani, two hours away.

In Vientiane, visit the golden stupa of Pha That Luang, the symbol of Lao nationhood. In Yasothon, the Phrat That Phra Anon stupa is said to enshrine hold relics of Buddha’s personal attendant monk.

Bun Bang Fai is a fun, silly and somewhat "naughty" festival. Don't go if you are offended by a bit of potty humour!

On a serious note though, the (cheap) alcohol flows quite freely at this festive event - so expect the kind of generalized bawdiness and mischief associated with lots of booze, as well as tumbles, slips, stumbles and falls. Be prepared for anything - and if your preparations involve you taking it easy on the drink, then you will be in a safer position than a drunken lout - common sense really!

As for the rockets, well, lets be honest. It's dangerous - especially if you are unlucky enough to have debris fall on you as a result. (Although having said that - you do have to be pretty unlucky for that to happen). If you are witnessing the climax of the festival, try and do so under some shelter if you can - it could save your head! The highlight is a ceremony called Van Loi Heua Fai, which involves the release of illuminated banana-leaf boats carrying flowers and incense. 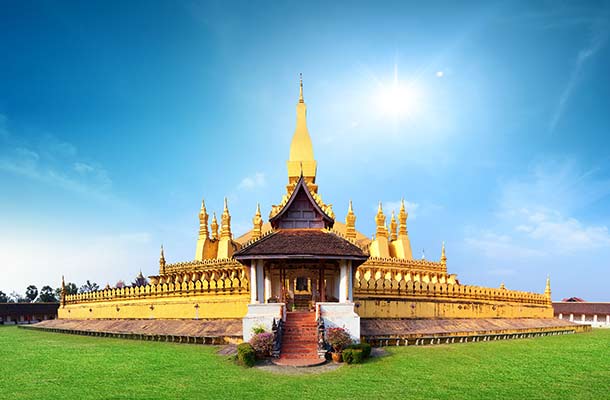 Boun That Luang: Inside Laos' Festivals

People from all over Laos congregate to celebrate the occasion, with three days of religious ceremony followed by a week of daytime and nighttime festivities. 6 Ways to Get Off the Beaten Path in Laos

Don't follow the tourist trail in Laos. Instead, why don't you try learning the local lingo, giving a bit back and visiting a local wedding?