Mandalay is often skipped in favor of bigger, and more modern Yangon. But with so much history and charm, our insider Hannah reveals why you should keep it on your itinerary.

Mandalay is Myanmar’s last royal capital. Located in the northern part of the country, it’s considered to be one of the main entry points to Myanmar, but many travelers choose to take a trip to the largest city in the country, Yangon.

To fuel your excitement, here are the top things to see and do in Mandalay.

Mandalay hill is a popular pilgrimage site, with several pagodas and monasteries. The highlight is Sutaungpyei pagoda on top, which has several places to see stunning panoramic views, and it’s especially beautiful at sunset.

Walking up the hill will take about 30-45 minutes without stops. If you choose to walk, keep an eye out for snakes – especially after dark. If you’re not a fan of snakes or working up a sweat, get your driver to take you to the top.

Mandalay Palace is a large, walled complex that was originally constructed in the mid 1800s. Most of it was destroyed during WWII, however it has since been rebuilt.

Most of the buildings are open to visitors, including the watchtower, which is worth climbing for the view of the palace grounds below.

This beautiful Buddhist monastery was once part of the Mandalay Palace, but was moved to the base of Mandalay Hill. The building is known for the teak carvings, which depict famous Buddhist myths.

Mahamuni Buddha Temple is another famous Buddhist pilgrimage site. Mahumani Buddha is said to be one of the five likenesses of Buddha made during his lifetime.

Men pay respect to the Buddha by applying gold leaf to the statue, which has distorted its shape over time.

This complex is made up of a large golden pagoda that resembles Bagan’s Shwezigon pagoda, and more than 700 ornate white stupas.

What makes this attraction so unique is that, together, all the stupas create the world’s largest book. Each stupa holds a stone tablet ‘page’ from the Tipitaka.

Hsinbyume Pagoda is a gorgeous white pagoda modelled to resemble Mount Meru, from Buddhist mythology. The pagoda was built by the king in dedication to his first consort (and cousin), who died in childbirth.

Amarapura was the Burmese capital twice throughout history. However, today it’s a township of Mandalay. There are several interesting sites and attractions in the area, including the famous U Bein bridge. Read more about Amarapura here.

Marionette shows are a historical treasure in Myanmar. It was once a revered art enjoyed by royalty and common folk alike, but today has become a dying tradition.

Still, it’s possible to see one of these traditional shows at the Mandalay Marionettes theatre. To avoid disappointment, tickets should be purchased in advance.

The Mandalay night market is mostly food stalls rather than shopping, but it’s a great place to grab a meal, meet some friendly locals, and experience the city life.

Another popular market is the Jade market, which deals Jade chips, and pieces of all quality and sizes. Is This Day-trip from Mandalay a Tourist-trap or Must-See?

Inwa was once the capital city of Burma, and to this day appears to be one of many hidden secrets in Myanmar. But is a day trip to Inwa worth your while? Why you should trade the hustle and bustle of sightseeing on land for a leisurely boat ride upriver from Bagan to Mandalay – our local insider Kristen shares her experience. 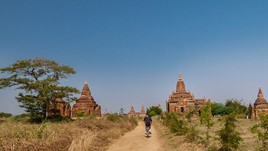 Where to Go Hiking, Trekking & Cycling Around Myanmar

Goats on the Road reveal the best trekking and cycling routes in Myanmar, plus tips on how to plan for your adventure.