Reflecting on TEFL in Thailand: Become a Better Teacher

Teaching English in a foreign country can have so many rewards. Caz from yTravel Blog shares five of her favourite things about teaching in Bangkok.

My high school in Bangkok had never had a native speaking English teacher before, especially one that was in stark contrast- with my blond hair, blue eyes and skirts - to the 500 hundred boys I was soon to teach.

The microphone almost slipped out of my hand, not from the humid heat, but my nerves as I stood up at the whole school assembly on my first day to introduce myself. Rows of identical faces, dressed in uniforms of white shirts and khaki shorts smiled up at me, nodding and clapping, even though none of them knew a word the strange falang was muttering to them.

Were the students able to understand me by the end of my 6 month teaching contract at Wat Saket High School? A magician I am not. And while many of my boys learned new phrases and expressions, some learned a lot more and some less. But by the end of it, most had a deeper understanding of the many foreigners they see daily invading the streets of their city. They had that much needed English and foreign exposure that they, in their cardboard shacks along the Chao Phraya River, would normally never have.

My success at the school was not of a quantitative measure but more of a deeper impact that so often comes when two differing cultures merge to learn that it is not the differences that separate us as much as the similarities unite us.

Teaching English in a foreign country can have so many rewards. Here are just some that I walked away with from my time teaching in Bangkok.

Wat Saket High school is attached to Wat Saket, a well-known temple in Bangkok. Many tourists know this as The Golden Mount, or Phuu Khao Tong. We could see the Golden Mount from our converted-office bedroom on the third floor of the school building. I often took my students for walks up to the top and surrounding grounds for lessons.

Wat Saket is a Royal Temple, and religious ceremonies are often held here. One of the privileges of teaching at Wat Saket was that Craig and I were invited to many of these ceremonies; ceremonies that falangs would otherwise never get the chance to be a witness of.

It is Thai custom for all young men to be ordained and a very famous Thai singing superstar chose to be ordained at Wat Saket as a monk for 2 weeks. As we were on a cultural exchange program, and I was a teacher at the school, we were invited.  The temple, and our school, was filled with hundreds of fans, celebrities, and journalists witnessing the historic event.

Although we could not understand a word of the ceremony, our friend and mentor Gai, translated as best as she could. We watched with fascination as his head was shaved and cleaned. Adorned in white robes he walked around the temple three times, or should I say shuffled, with the amount of people clambering around to just get one touch.

We were then given access to the intimate ceremony within the temple where he changed into his orange robe and was given his monks bowl so he could receive alms from the people early each morning. The prayers and chanting then rang on into the afternoon and good luck coins wrapped in orange cellophane were thrown out in the crowd. Mine is still pasted into my journal.

There is a gentle calm and light-hearted friendliness that comes with my relationships with my Thai family. Every moment spent with them was filled with laughter as we tried to understand each other and work out the different ways we thought.

Jintina, one of the most kind-spirited person I have ever met, became our guide, mother,  friend and a very supportive colleague for me at school. Whenever I needed a hug, or a talk she was there to, not remind me of my problems of challenges, but to show me what was so wonderful about my life.

She gathered her friends and ex-students together and we would spend almost every Friday night going out to dinner, watching movies and eating ice-cream. There was nothing Jintana wouldn't do for you and she showed us what true friendship really means.

In Thailand it is quite normal for teachers to hold friendships with their students. The students often took us for weekend excursions to nearby historical sites, as well as to coastal towns such as Pattaya to see famous Cabaret performances. They taught us how to cook Thai style, helped us learn the language, showed us “local” Bangkok, which included where to get the best massages, the most delicious food, and the best camera equipment.

“Whatever you do, do not throw your books on the desk, as Western people are so apt to do. The book is a giver of knowledge and Thai people treat it with the utmost respect.”

I was soon to learn how much respect Thais hold for many things - Buddha, teachers, knowledge, each other. My eyes were open as to how easy it is to respect things, and just how much of a gift respect is.

There was not a minute walking down the school halls, where I would not be given a Wai by a passing student. Their hands would come together prayer style to their forehead and many of the students would crouch down, almost to a crawl, to ensure they would be lower than me. They would race to my desk at the end of class, in order to have the privilege of carrying my books and chat with me as we walked to the next class together. The teacher, the giver of knowledge, is second to only Buddha in terms of respect.

At first I felt uncomfortable, with my Aussie egalitarian upbringing, but I soon learned to appreciate the reverence and importance of honouring those who have walked before you. And even though the student was considered lower than me, by accepting their form of respect, I was showing my reverence for them in return. Now when I return to Western schools and receive abuse from students, I miss my Thai students who understood the value of education and honouring the worth of all people.

Of course, teaching in Bangkok helped me to learn how to become a better teacher. I learned how to get my message across in very simplified non-verbal ways. There is a lot you can communicate with a song, a drama reenactment and a jump to the floor. I learned how to listen and understand what others are trying to say when they don't really have the words to say it.

Of course there was the technical side of things that came with planning lessons for a class of 40 boys where some students could hold a conversation, yet others could not even say hello. Organizing and running an English 2 night camp was one of the highlights of my teaching in Bangkok. To see the delight on the students faces as they swam,  many for the first time, in the ocean. I'm not sure they enjoyed the English games we played and songs we sang as much as they did their nighttime private room parties!

I could not write a post about living in Thailand without writing about Mai Pen Lai or the Thai belief in “No worries.”

It was probably not for many months after I had left Thailand that I realized just how much this state of being had now metamorphosed itself into my soul. I began to feel quite shocked at how stressed those in the Western world around me seemed to be, and how much they worried about the simplest and smallest of things.

In Thai culture, there really is no worries. No matter what is happening in your life, you can always wear a smile, and you can always be grateful for what you have. There is always someone worse off then you.

After a return visit in 2006, Craig and I were toasting to our five-year honeymoon in the streets of Bangkok. Unbeknownst to us, our plane bound for Sydney where our families eagerly awaited our arrival, took off over our heads. We discovered our SNAFU later that evening as Jintina took us to the airport to catch our flight.

“Mai Pen Lai Caroline. There will be another plane tomorrow. You spend more time with Thai family now.”

I only hope that my students learned as much from me as I did from my time teaching and living in Bangkok. We still keep in contact with many of them, and our first port of call whenever we arrive back to Bangkok is to Wat Saket High School. Although my students are long gone, my beloved teaching colleagues still welcome Craig and I with open arms, and together we hunt down old students to catch up over dinner, the movies, and some ice-cream.

Caz Makepeace has been living and travelling the world since 1997, both solo and as a couple, and now with a three year old. Her husband, Craig, and her believe life is all about the memories and so travel to create more of them. Their travel tips, and stories at yTravel blog aim to inspire and teach others to make their life a story to tell. Come join them on Facebook and follow them on twitter. 7 Reasons to Teach English in Thailand

Crystal Gale – i-to-i’s teaching abroad expert – shares her top tips to make sure your TEFL job turns out as you expect in Thailand. 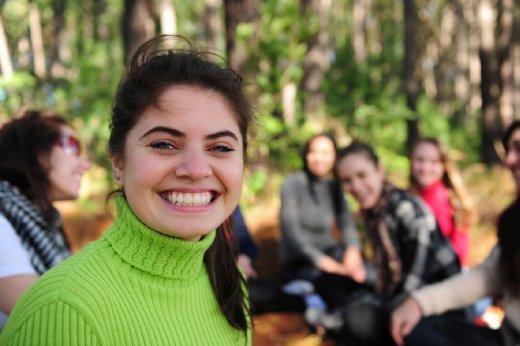 Heading overseas to teach English as a foreign language? Here are 13 tips to make friends while you're there - no matter how shy you are! 5 Things I Wish I Knew About Teaching English in Japan

Ever wondered what it’s like to teach English abroad? An Ex-English-Instructor shares her experiences and tips about hiring processes, settling in, and the best and worst things about teaching English in Japan.