Cyclo Culture: Getting Around Vietnam in the Slow Lane

Christy McCarthy, Head of Digital at World Nomads, shares her top tips for hailing a cyclo in Vietnam, and the benefits of riding in the slow lane.

Cyclos (also called trishaws) in Vietnam are now mainly for tourists, although many locals do still use them from time to time. They aren't hard to miss, as drivers ring their bells constantly trying to attract attention, especially near tourist attractions.

In a cyclo you’re sitting in front of the driver who is on a bicycle behind you, so you really feel part of the crazy street traffic. If this sounds like a terrifying proposition to be in among the moped frenzy of Ho Chi Minh or Hanoi, then let me explain some of the great benefits of grabbing a cyclo.

Benefits of Taking a Cyclo

Downside of Taking a Cyclo

The downside to all this is occasionally absorbing new smells. Although, not always that nice if you pass piles of rubbish or sewers!

Careful with the scammers too. One of our Nomads got scammed on her first day in Ho Chi Minh. The driver promised it would cost AU$10, but at the end of the trip, he demanded they pay AU$100! When you're unfamiliar with the Dong, it isn't hard to get confused.

Tips for Hailing a Cyclo

I'd been in Hanoi just one day and couldn't work out how to cross the street. After half an hour watching for a gap in the relentless traffic, a guy gently took my arm and led me calmly and boldly into the oncoming traffic.

We reached the other side safely and I grinned... "Thank-you, thank-you" I said, as he hopped back on his parked cyclo. "How about a ride tomorrow? I'll pick you up at 9 and take you everywhere!"

How could I say no? And thus begun a great three days in Hanoi as seen from the front of Mr Bihn's bike.

The highlights were a spot of lunch in a local restaurant near some military buildings – no English on the menu, the *best* fish in tomato and dill dish I have ever eaten, and a roomful of uniformed Officers talking and laughing over tea and rice.

It was a moment in time where the communist Vietnam of old, and entrepreneurship of new came face to face. The deal was that I paid for both of us – about US$5 in total – but got to see a local view that wasn't on offer to other tourists. For me, a priceless memory. Cyclo drivers are a lifeline into the real life of Hanoi.

Christy McCarthy is the Head of Digital at World Nomads. How to Cross the Road in Vietnam

Getting around Vietnam is an art in itself. Here's everything you need to know about crossing the chaotic roads, and using public transport. Dos & Don’ts for Travelers in Vietnam

Abide by the customs and rituals of Vietnam to avoid offending the locals, with this list of do's and don'ts in Vietnam. 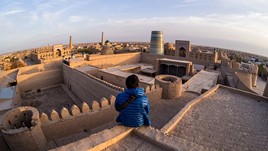