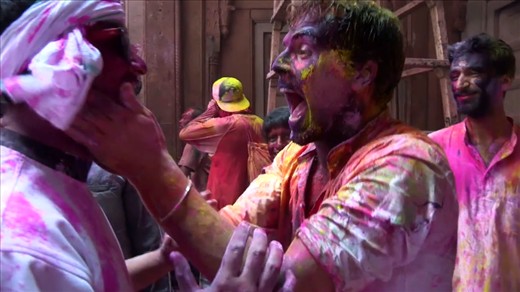 He has ridden camels through the Sahara desert, sailed around the Great Barrier Reef, and communed with the jungle tribes of the Amazon rainforest.

In spite of all those adventures, India tops his list of personal favorites.

Kate Hoffman, our Editorial Producer, sat down with him (virtually) to ask how he prepared himself and connected with one of the most vibrant and beautiful places in the world. India.

What are three things that Indians do really well?

1. Indians LOVE to smile. They flash their pearly whites like they’re getting paid to do it. And it’s almost a guarantee that if you smile, they will too. Not too bad of a habit, in my opinon.

2. Indians are the “gurus” of hospitality. The masters of hosting, Indians spare no time, expense, or effort in making their guests feel every bit at home, if not more. It truly ceased to amaze me how friends and families I came to meet along the way extended their arms and opened their homes to me.

3. Indians dance. A lot. And always. Music and dance are so richly engrained into their culture, no one’s got them beat.

How did you prepare yourself to travel to India?

In preparing for India, I was fairly clueless. The idea of packing almost paralyzed me. Where do I begin?! I knew the climate would for the most part be hot and humid climate. Other than that, I knew I would need a little more than a handful of vaccinations- rabies, malaria, tetanus, etc. And I had the lingering feeling that, at some point while in India, my bowels would most likely to erupt- several times. Other than that, I really chose not to dig any deeper into what I had already know about India. I wanted to be culture shocked. I wanted to learn firsthand, run face to face into as many experiences as possible. And, well, I did.

Did you find any hidden gems? We won’t tell anyone.

Chandi Chowk: If you want a bizarre bazaar experience, go to Chandi Chowk in the heart of Delhi. It is the epicenter of the old city, and where commerce and trade once reigned. It is a perfect storm here: you name it, they’ve got it and at a price you wouldn’t say no to even if you knew how to say “no”.

Golden Temple: far to the northwest bordering Pakistan, in Amritsar, there lies the Golden Temple, a pilgrimage site to those of the Sikh religion. Here you’ll find one of the most beautiful and mystical manmade places on Earth. A magnificent koi fish pond surrounds this pristine, marble and gold-laid temple, as thousands of devotees line up for but a fleeting moment to pay homage to their gurus.

What moments had you out of your comfort zone and what did that teach you about yourself?

Okay, so the rundown on India is that EVERYTHING is going to be “out of your comfort zone”. Once, I saw a man pooping on the side of the road. Then I saw it again. And again. And….again. So, by the fifth time, I wasn’t really phased. Was it a big deal? Errrr, no. Was it uncomfortable? To witness in a public setting, yes. I mean, I was a little embarrassed for all present at that moment, It definitely was a surprise. More so though, I was hit with sadness by the poverty that India- an over-populated country with more than one billion people- struggles to remedy.

The contrast I saw between my own standard of living and theirs haunted me. No one with a heart is ever really the same. So I feel that something has changed within me- if anything, I feel more grateful. Before India, I used to say to myself, “Yeah, I know I’m fortunate. I know it.” But did I really? We got it way better than most. I think it might be worth mentioning here that I did drink cow urine on one occasion, and later smothered myself head to toe in fresh and local cow dung. Both of which were somehow not outside of my comfort zone. Don’t know why. Just is.

What’s the hardest thing you found about adapting to the culture there?

One of the hardest things to get use to in India was the traffic, the smog, and the overall pollution. Rarely did I indulge in the privilege that was taking a deep inhale of somewhat pure air. When I did have such an opportunity, I was thanking as many gods and demi-gods as possible. However, by far, the absolute, most difficult thing about India (and attempting to adapt to it) was that the people were living in such unsanitary and unhealthy conditions, and to no real fault of their own. You need to keep in my mind that India is going through massive changes at this time. There are so many issues, trials, and challenges that face India today, no wonder it’s called a “developing country”. It’s easy to find yourself at odds with yourself, feeling like you can’t do enough to “save the world”.

Tell us about your “F*** Yeah!” moment in India (That moment you realised it was awesome)

Very few times in life are we ever truly present to all of what’s really happening in our own “here and now”- we’re caught up in the hamster time wheel of what was or will be. But after seeing Holi- everything changes. Holi is a call to celebrate Life. And what follows is absolute surrender to the delightful madness all around you. Vibrant cloudbursts of color explode onto skipping and dancing children and elders. Liquid rainbows pouring onto their once white linens. Holi was a truly amazing moment far beyond the scope of words. In pure joy for ALL that is worth celebrating in Life, it’s almost impossible to go to Holi and not shout out from the top of your head: “F*** Yeah!”

And what about the food? Any Delhi in the belly?

Okay, at some point, we have all asked and been asked: “If you were all alone, stranded on a deserted island, and there was only one type of food you could eat...what would it be?” – yeah, this trip nailed it for me: it’s Indian or bust. It wouldn’t even matter if it was from a street cart or a decadent restaurant. The stews, the spices, the flavors, and textures. All of it. It’s so delicious, that even in the (fairly likely) chance you get sick, it’s totally worth going a few rounds with Sir Dehli Belly.

For other Nomads travelling to India for Holi, what advice would you give them to make the most out of the experience?

Come here with an open mind, an open heart, and bring nothing with you that wouldn’t mind forgetting, losing, or just plain ditching at some point. If I were to do it all over again, I’d only change one thing: I’d buy one of those squirt guns some of the kids were playing with, and I’d load it with as much red, yellow, and purple paint as possible. Prepare for color. Have fun. And GO already!

Due to its enormity and vastness, there’s so much more of India left for me to explore. I realize now how huge it is. Even after a year of traveling through most of India, a friend said to me she felt that she had just begun to scratch the surface. If and when I go back, I’d like to explore the north of India- less hectic and stressful than places such as Mumbai and Delhi, and more of the natural beauty of forests and mountains of the Himalayas. Explore Northern India with these tips from a traveler that has been, seen and tasted the local cuisine.