A high-pitched scream echoed down the canyon walls - something was wrong.

I ran around a bend in the river and could see that Tsering had slipped into the near-frozen water. I watched as he desperately clawed at an ice shelf with his fingernails while the current twisted his body down river. What had started as a challenging adventure was turning deadly.

Several years before, I had heard rumors of an isolated Buddhist community living deep within the Indian Himalaya, cut off from the rest of the world by snow-covered passes for up to nine months a year. The only access to this area during the winter was a dodgy 60-mile trek up a half-frozen river – the Chadar Road. Drawn by the challenge to explore such a remote area, two friends and I began walking along the Zanskar River in February of 2002.

On the fourth day of the trek, we encountered a section of river where water flowed over the ice creating 12 inches of slush to wade through. Tsering, one of our porters, was creeping along a raised section of ice next to the flowing waterway. With a small slip, he tumbled into the river, his yak-wool robe and leggings immediately became waterlogged and pulled him deeper into the dark torrent. Nearby, two other porters, clutching walking sticks, stood frozen with fear as they watched the icy water swallow their friend.

Reacting to Tsering’s distress, I charged toward him and instinctually thrust out my hand. Tsering latched on with all his remaining strength, but as my boots began sliding on the slick surface, I knew we were both in trouble. Less than a hundred feet downstream, the churning whitewater disappeared under a tomb of thick ice. I looked back down the valley at my two friends running towards me, but with a quick visual calculation, I realized they would not reach us before I would be pulled into the river.

Tsering’s and my eyes locked together, both knowing our lives were linked to the scant friction of the soles of my boots slowly slipping across the ice. Time slowed to a near standstill as I watched my feet creep slowly over the black pockets of air trapped in the ice. Without any warning or reason, my foot wedged against a bump of ice no larger than a jelly bean – we stopped. My arteries were still thick with adrenalin as I yanked Tsering out of the icy Zanskar. Tsering gave me a big hug before we shuffled away from the rolling current.

By the time we arrived at the sunny embankment on the side of the river, other men traveling up river had built a roaring fire to warm ourselves. While Tsering changed into dry under cloths and wrung out his thick robe the other men gathered around me.

“What is name?” questioned one of the Zanskari men.

“My name is D-A-V-E,” I said slowly and distinctly, having learned my name was not common or easily pronounced in the Zanskar language.

“Deva?” the man responded with a puzzled look on his face.

In Buddhism, Devas are god-like beings that are more powerful or more blissful than humans.

Impressed by my first name and my actions, the English speaking Zanskari looked at me and said, “Deva is God, Deva is God”

It took me a few minutes to connect my name to the Buddhist reference and understand his comment and by that time several of the other men had joined in the chant. “Deva is God”

Embarrassed by their words I shook my head knowing my perceived bravery was brought about by an instant reaction and I wondered if we were not stopped by that small bump of ice would I have let go of Tsering’s hand?

Finally, I looked at them and said, “No, Dave is not God, Dave is cold.” Then I added in broken Zanskari, “Tangmo mi rak,” – I am cold.

They looked at me tilting their heads not understanding. I then pointed down at my boots still filled with ice water repeating “Dave is cold.”

Smiles formed and the men laughed while adding more branches to the fire. Others slapped my back and someone thrust a cup of hot tea into my hands chanting, “Dave is cold, Dave is cold!”

Dave Anderson was born in a safe and sterile suburb of Connecticut, but at a young age he began searching for more. His travels have taken him from the depths of South American rain forests to the top of unclimbed Himalayan peaks and many places in between. Dave makes his living as a writer, photographer, filmmaker, mountain guide and is co-owner of LittlePo Adventures, a guiding company that specializes in small custom trips to Asia. 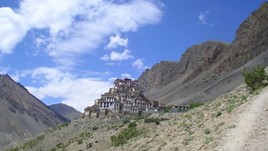