Mariellen Ward shares her favorite experiences in Kerala, from the tea plantations in Munnar to hiking in Periyar National Park and hanging out at the beach in Varkala.

Walk along white sand beaches, hike through misty mountains, and paddle past local homes in the fascinating backwaters – there’s really no wonder why Kerala is one of India’s top tourist destinations.

Kerala winds 360mi (580km) along the southern coast of India, almost reaching to the very tip of the country. You can watch a spectacular sunset every night from many fine beaches that line the Arabian Sea coast in this tropical state.

And that’s just the beginning of Kerala’s attractions.

Wayanad in the north is dotted with rice paddies, carpeted with thick forests, and home to the Wayanad Wildlife Sanctuary. Adventurous travelers can try climbing Chembra Peak (6,889ft/2,100m) in the Nilgiri Hills, the highest peak in Wayanad.

South India’s most popular wildlife sanctuary, Periyar National Park in Thekkady, among the Western Ghats, is famous for jungle walks and gorgeous mountain scenery. It’s also a great place to see wild elephants, tigers, bison and many other animals.

In Munnar, you’re often up above the clouds, among rolling hills of every shade of green. Munnar is the center of the tea trade, and it’s also a top spot to visit for several bird and wildlife sanctuaries, including Eravikulam National Park.

With so much to see and do in Kerala, the beaches get more than their fair share of attention.

Head north, where there are less tourists, for long white-sand beaches – ideal for those of you trying to get off the beaten Backwaterack.

In central and south Kerala, you’ll find some of the state’s most popular beach haunts, like Varkala and Kovalam.

Varkala is my preferred beach hangout. While most visitors make a beeline for the north cliff, topped with a long line of restaurants and cafes that cater to foreign tourists, I prefer the less busy Odayam Beach and the serene south cliff.

Muzhappilangad Beach in Kannur is Kerala’s only drive-in beach. Crescent shaped, and four kilometers in length, it’s a beautiful beach that attracts adventure travelers that enjoy paragliding and parasailing.

Kerala’s coast has been an important stop on the spice route for more than six centuries.

Fort Kochi (Cochin) is a trading port with a fascinating history, still very much alive in the mix of ancient Chinese fishing nets, medieval Portuguese buildings, a 400-year-old synagogue, and the crumbling remains of the British Raj.

It’s also crammed with charming homestays, boutique inns, and hip cafes. It’s certainly one of my favorite places to chill for a few days in Kerala.

From Kochi, it’s an easy drive to Alleppey, the gateway to Kerala’s famous backwaters. Here (and in Kottyam and Kollam) you can rent a houseboat and crew to cruise the network of canals. An overnight cruise is more than enough for most people.

The best way to explore the backwaters, though, is to hire a canoe or kayak for the day, and paddle along the canals with a local guide. The houseboats can’t fit through these narrow passageways, so you’ll get a unique glimpse into the waterways that you wouldn’t get on an overnight boat.

No introduction to Kerala would be complete without mentioning the rich religious and cultural traditions. Most major religions are well represented in Kerala, and the state buzzes with religious and spiritual activity.

Some of India’s most colorful festivals and beautiful temples are in Kerala. The cultural traditions include Kathakali, a 300-year-old dance form known for elaborate make-up and costumes.

Kerala is also the center of India’s traditional system of healing known as Ayurveda – a sister science to Yoga. There are Ayurvedic centers, hospitals, and resorts throughout the state, from the simple to the luxurious.

Yoga is often available at Ayurvedic centres, and vice versa. 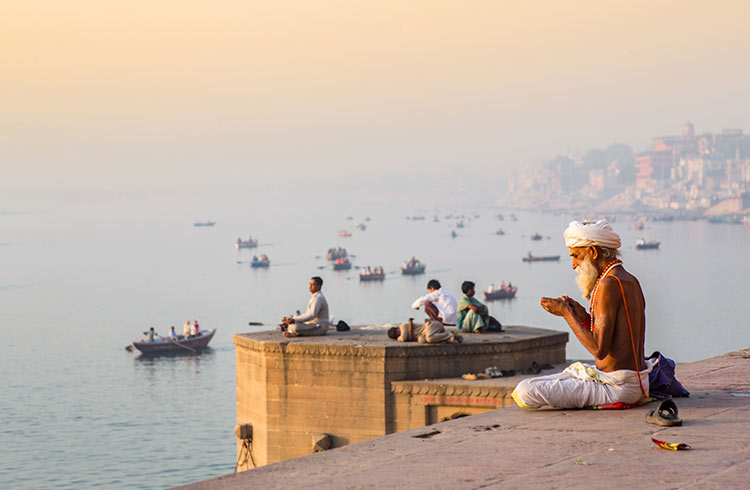 Long-time yoga practitioner Mariellen Ward shows you how to get the most out of your spiritual journey through India.