After righting a classic faux pas in China, Adam did all the research he could before his trip to India.

I used to consider myself a tourist, these days I like to consider myself a traveller. I've been fortunate enough to travel quite a bit, in groups and alone, for business and for pleasure, frequently for both.  I love to see new places in the world, learn about new cultures and experience how people adapt to different situations and persevere through a variety of challenges - whether environmental, social, economic or political.  Over time I realized that I have a responsibility as a traveler - I need to understand where I'm going.

This lesson was learned the hard way.  In 2007, I went to China to teach hockey for a professional hockey team.  During that trip, I spent 12 days working with 10 of them on the ice twice a day, as well as official meetings and meals. It was an amazing experience that contributed heavily to where my personal and professional life has progressed. It was also an experience that left me wondering how I could have prepared and behaved differently.

Upon arrival in Shanghai, we quickly transferred to another flight to bring us to Harbin, the capital of Heilongjiang Province (along the Northeastern Border with Russia). There was no time to recover from jet lag.  We immediately went into meetings, then had a session on the ice, followed by drinking a fair portion of baijiu (Chinese liquor) and then going back on the ice.  I quickly learned that being hosted by local Chinese organizations was an opportunity for them to showcase their hospitality.  Saying "no" is considered disrespectful in social gatherings, but I had to draw the line, as my stomach was struggling with the food and the baijiu.  Drinking before and after hockey every day is not part of my normal routine.  As a result of my saying no, my nickname quickly became "No Ganbei" (the loose translation is "bottoms up", the expectation is also "bottoms up").  I would just say it over and over, "no ganbei". In less than a week, I was voicing my frustration.

In retrospect, I should have handled my situation differently.  It wasn't until my return to New York that I learned about some of the cultural norms.  Our translator tried to help, but it was too much too late.  I could've just explained the value of maintaining a strict diet for hockey that excluded so much alcohol.  It would've been a respectful way out, instead of just saying "no" without explanation.  I also needed to understand that complaining in Asia is not the same as complaining in America, especially New York, where it is almost perceived as authenticity.

In Asia, China especially, saving face is important.  Expressing my dissatisfaction the way I did was only perceived as emotional, erratic and disrespectful. Saving face also plays into language.  As China and America have increased their trade relationship, the demand for people from both countries to speak the other's language has increased.  There were times when I would complain to my colleague about the situation we were dealing with around a group Chinese that never uttered a word of English.  Avoiding embarrassment is a component of saving face, and many Chinese people get embarrassed when trying to speak English.  What I did not realize was that not speaking English does not mean that they don't understand English. There I was rambling, assuming nobody understood what I was saying.

One of the things I learned is that it's important to educate yourself on the culture that you will be visiting.  I spent a lot of time trying to learn about Chinese culture. Unfortunately, it was after my trip when I returned to New York and I promised myself not to make that same mistake again.

And then an opportunity presented itself two years later with a similarly unique project – this time, to India.

An Opportunity in India

Before I left for India the first time, I studied. I read a few books on Indian culture, business norms, the history of India, Tibet and Kashmir - as much as I could. I was terrified of making a cultural faux pas like I felt I had done in China.  I also changed my way of thinking - I started listening to more Tibetan music, burned incense (it was relaxing, just go with it), ate more Indian food, watched programs about and in India to complement the books, and reflected on my experience in China and how I could apply the lessons learned in India.

I began The Hockey Foundation in reaction to the work I did in China and in New York.  At first, it was just me, traveling to remote Ladakh as a volunteer.  There were few details I knew in advance.  I knew Ladakh was in the Indian Himalayas, was predominantly Buddhist, had a more Tibetan-like culture, and was in a state with the name Kashmir in it.  For a while, I was promoting my trip as hockey in Kashmir.

Upon arrival, I realized how wrong I was.  For starters, nobody "looked" Indian (as in they had Mongolian features).  They also didn't view themselves as Indian. To go one step further, they weren't Kashmiri either. Ladakh is a very small region in the state of Jammu and Kashmir.  While Jammu is predominantly Hindu, Kashmir is predominantly Muslim and Ladakh is predominantly Buddhist, with a significant Muslim minority.  I spent my days in Ladakh learning about the history, culture, society, environment, and politics - and spent even more time observing and analyzing.

By no means do I feel I passed the test of navigating the difficulties of intercultural business relations, but I do feel I did a much better job this time around.  My first trip to India was something I organized on a whim in efforts to help make a difference in a remote part of the world, but it was also something I was drawn to.  As a result, I was able to just go with the flow, which allowed me to truly savor the experience.

My trip began as an emotional journey, and developed into something that required greater responsibility. I started by writing about the experiences of in a new land and a new culture and an important project, but I also became accountable to a program, a project, and a large group of people that were directly affected by my words and actions.

It was on that initial Indian expedition that I had the opportunity to coach the national ice hockey team of India, as well as develop the concept of my one-man non-profit initiative.  With this, I am now responsible to donors and the US Government, as well as countless other organizations.

As I’ve dealt with being more responsible for my organization, its goals, the people affected by it and the people that contribute to it, I gain a different sense of meaning. Travelling responsibly is not always about learning a culture and how to interact better, but for me, it’s the most important component as it affects how I approach my work.

That being said, if you don’t feel challenged during your travels, you’re doing something wrong.  You’re too comfortable.  Get yourself into a difficult situation, make the most of it and get yourself out of it.  Go back to the place that impacted you or that you impacted.  See how things change when people realize that we are all intrinsically linked.  It’s amazing how deeply that touches human beings of all cultures.

Adam Sherlip is the Executive Director The Hockey Foundation. As a responsible traveler, you have to make a choice – support the struggling local businesses who desperately need your rupees for survival, or support the ban on staying within the Fort's walls to help curb deterioration. 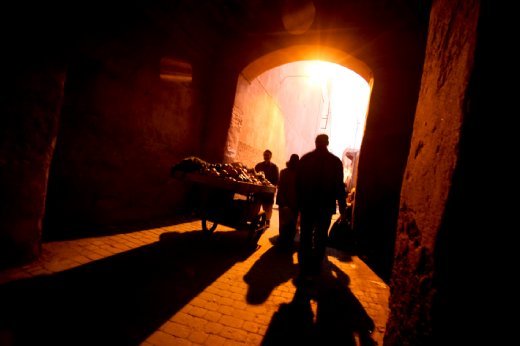 The primary rule of travel, as immutable as the laws of physics, can be thus rendered: wherever there are tourists, there will be hucksters. They misdirect you to bad attractions. They over-charge your for services or souvenirs.