Nomad Sarah shares her tips for making the most of your Sri Lanka trip: off-the-beaten-path sites to visit, ways to connect with the locals, and Sri Lankan food not to be missed.

Sharing fiery kithul (palm syrup) and ginger cookies seemed like the best way to compensate for my terrible Sinhala pronunciation while traveling through the remotest parts of Sri Lanka. During my year of living there, and during other years of visa runs from the Maldives to Sri Lanka (two hours away by plane), I became fond of hopping on the Sri Lankan bus network.

From just US $1.30 a ticket, and with routes criss-crossing the country, it seemed a pretty appealing way to explore. It meant I often found myself in remote rural areas where nobody spoke any European languages, but it did lead to a lot of discoveries.

Although many people speak English in Colombo and the touristy areas, only 23.8% of the population speaks English. If you’re heading off the beaten track, try to familiarize yourself with some basic Sinhalese pronunciation. Pointing at an English-language map won’t cut it – the beautiful, swirly Sinhalese alphabet uses different characters. But sincere effort, a friendly attitude, and some cookies can get you a long way (literally). That was probably my first real lesson about Sri Lanka. Here are some others.

In Mannar District, on the far northwest coast, Rama Setu (Adam’s Bridge) is an awe-inspiring 30 mi (48km) chain of limestone rocks and islets that are the remains of a land connection between India and Sri Lanka. According to Sanskrit legends, it was constructed by an ape-man army belonging to the god Rama, so he could rescue his wife from imprisonment in Sri Lanka. Several ancient Islamic texts refer to Adam’s Bridge as the point where Adam crossed into India after being expelled from the Garden of Eden.

Since many parts of it are only about 3ft (1m) underwater, there’s evidence people once used it to cross between India and Sri Lanka on foot until it became partially submerged after a cyclone in 1480 AD. Rumor has it that people have continued to wade across for centuries but today, Indian Immigration would not be impressed, so don’t try it!

If you’re heading east, the huge 7th-century buddha at Maligawila in Moneragala District is the tallest and finest example of an ancient freestanding buddha in the country. It stands at 37ft 10” (11.5m) tall and was constructed from a single piece of limestone on the orders of Prince Agrabodhi. The statue’s head towers among the treetops surrounding it. With its serene pose and a natural soundtrack of birdsong, it makes for a peaceful pitstop.

Avoid the crowds at popular attractions

If you visit a sacred site during a religious festival, you’ll see pilgrims making offerings of sweet-smelling jasmine garlands and might find the bustle exciting. But if you want to avoid crowds, don’t visit during any national holidays (check the calendar), particularly weekends around Poya Day when attractions and public transport are thronged with domestic tourists. I once had to stand for six hours on the Ella-Kandy train.

Poya Day is the monthly Theravada Buddhist holiday of Uposatha, and occurs during full moon. Theravada is the predominant form of Buddhism in Sri Lanka, and so Poya Days are always public holidays. Uposatha loosely translates as “entering to stay” and refers to the practice of coming together to reaffirm commitment to Buddhism. As such, the sale of alcohol is suspended out of respect for the religious holiday, and Sri Lankan families hit the road, en masse, to visit temples (both ancient and new), as well as pilgrimage sites such as Adam’s Peak.

Connect with the locals

Have your horoscope made

For a unique Sri Lankan experience, ask any Sri Lankan to introduce you to a horoscope maker. In Sri Lankan culture, horoscopes are a very respectable part of local life. When a child is born, a very detailed horoscope is drawn up for them, if an entrepreneur is signing a deal, they’d check their horoscope to ensure they sign on a day which is auspicious for them, and when a couple wants to marry, they get their horoscopes checked to ensure they’re a match (or the wedding’s off). Even the time of arrival and departure at the wedding venue is decided by horoscope.

Most towns and cities have a horoscope maker. However, you’ll probably need to bring a guide/translator with you. You give your full name, city and country of birth and time of birth, and they’ll draw up six very detailed charts for you, covering everything from love and finance to character and inheritances.

A very different way to interact with locals is by surfing at Arugam Bay in Ampara District, where the mellow consistent waves are perfect for beginners. Most local surf guides consider it a personal challenge to have you standing up on a board within an hour. There’s even a certain amount of rivalry between them to have the best beginner. If you’re lucky, like I was, your surf instructor might even let you drive the tuk-tuk home afterwards. Find a guide through your hotel/guesthouse, or simply ask at the beach near Whiskey Point.

If you’re taking a road trip south of Colombo, head for the coastal town of Koggala. From the road you’ll see dozens of locals perched on top of wooden poles planted in shallow water, and unusual looking but very smart method of fishing. By sitting on the poles, the stilt fishermen avoid casting a shadow to scare the fish, don’t disturb the water with their feet, and are able to trick shallow-water fish into biting the bait on their lines. This is the only place in Sri Lanka where you can still see this traditional practice.

Fishing villages along the southern coast

There are also plenty of pretty fishing villages to visit along this route, such as Dondra at the southernmost point of the island. There’s a gorgeous beach, the country’s tallest lighthouse, the ruins of Hindu shrines, and authentic cafes serving local catches. But avoid Mirissa – this beautiful spot was once peaceful but rapidly became packed with illegal beach bars and party crowds. Many bars were removed, but its charm has gone.

Sleep inside an elephant

Inside the belly of an enormous straw elephant is probably one of the most unusual places I’ve woken up. The Elephant Villa at Kumbuk River Eco Lodge is the world’s largest straw elephant, and it sways ever so slightly when the breeze picks up, lulling you off to sleep. This Sri Lankan-owned boutique property is the perfect jumping-off point for Yala National Park, but it also channels funds into conservation projects and supporting rural communities in the area, as well as educating guests about biodiversity.

Sri Lankan dishes you must try

Sri Lankan cuisine has many of the same spices you commonly find in Indian food, such as chili and cardamon, but also a subtle blend of more fragrant spices, such as local cinnamon. This gives it the additional, fragrant complexity of Thai or Malaysian cuisine. Coconuts are a huge component, as are other plentiful homegrown ingredients, such as lentils, onions, and pineapple.

The national dish is simply called “rice and curry” but it actually features about five small curries. Usually four are vegetarian curries, such as dhal or pumpkin, plus there’s one meat or seafood curry. Try it with any of the infinite varieties of coconut sambal (an iconic Sri Lankan condiment) on the side. A traditional banana-leaf café is a great spot to enjoy rice and curry the way it’s been eaten for generations. These no-frills cafes serve your food upon an eco-friendly banana leaf.

The nation normally starts its day with the delicious street food known as “egg hoppers”, a sunny-side-up egg nestled in a crispy, crepe-like bowl made from rice flour and coconut milk.

Kottu roti is my go-to if I want comfort food – think of it as the Sri Lankan mac and cheese. The hole-in-the-walls serving them make a big show of dicing up the roti (flatbread) with huge blades – just follow the clanging noise. Chili, onion, coconut, scrambled egg, spices and (optional) chicken are thrown into the mix. The small island nation of Sri Lanka has a remarkable diversity of landscapes. Nomad Sarah shares some of her favorite places to spot leopards and elephants, snorkel with dolphins and turtles, and hike to spectacular views. Like any developing nation, Sri Lanka has its share of health issues. Find out how you can avoid traveler's diarrhea, dengue fever and more while traveling. 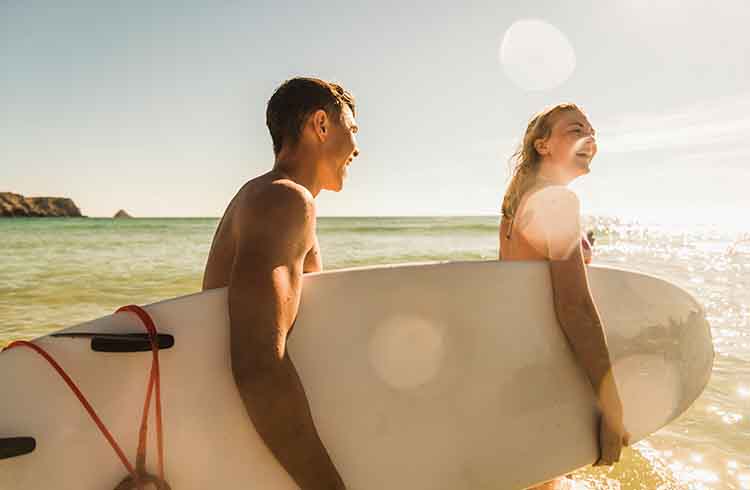 Hit the sets with insurance, as well as your wetsuit and wax.