For photographers and filmmakers who love their craft, drones don’t just enable them to capture the world in new and creative ways – they can also be a whole lot of fun. However, without some basic ethical principles and care, drones can cause damage to people, places, and wildlife.

Drones have quite literally changed our perspective on the world. Whether soaring over fjords, forests, farmland or festivals, these eyes in the sky reflect our world in unexpected and moving ways. From above, the sight of a mass wildebeest migration, a road winding through a cherry blossom forest, or a lone skier carving a track down an isolated mountain can pack twice the visual and emotional punch.

The built world can be jaw-dropping too, with the help of aerial footage. Skyscrapers spiking upwards, a crisscross of city freeways, a medieval castle perched high on a mountaintop – drones give us a whole new appreciation of just how capable humans really are.

Humans are far from perfect, however, and the relentless pursuit of likes, shares, and followers on social media means competition is intense when it comes to creating photos and videos that capture the world’s attention.

The rise of drones

Long before drones became something anyone could buy and fly, aerial photography was a difficult endeavor. The oldest surviving aerial photograph was shot in 1860 from a hot air balloon, 2,000 feet (600m) above Boston.

Large-format cameras strapped to kites later captured the 1906 earthquake and fire in San Francisco (remembering that back then, cameras had to be reloaded with film by hand). Attempts were even made to attach cameras to birds and rockets until the Wright brothers made powered flight – and reliable aerial photography – possible.

During World War I, the military came to rely on aerial photos shot from planes, and by World War II, aerial photos and videos were telling wartime stories more powerfully than words ever could in newspapers and magazines.

Israeli aerospace engineer Abraham Karem is credited with inventing the first Unmanned Aerial Vehicle (UAV), and the military used them to track potential targets and scout ahead for danger from the 1980s on.

For the photography enthusiast, drones followed in the wake of GoPros when it came to capturing point-of-view footage. Affordable drones capable of taking high-resolution photos and footage can now be ordered online and delivered to your door. Flying them is a snap and they can be piloted by gesture, track you as you move, and fly around obstacles without you having to lift a finger.

Ethical shutterbugs will always strive to protect people’s privacy and dignity when they shoot, but the unwritten rules around drone photography and videography aren’t always black and white.

For starters, it isn’t simply a matter of what we should shoot and what we shouldn’t. As photographer Alex Wild points out, “our ability to film nearly anything has outpaced our ability to think clearly about what we can and should do with the footage.”

While it’s clearly an invasion of privacy to film someone sunbathing in their own backyard, do the same ethics apply if that same someone is basking face-down on a public but secluded beach?

What if you’re filming waves crashing against cliffs from above and a bird of prey attacks your drone, thinking it’s a threat. What if the bird is injured or dies? Were you in the wrong, just by being there?

When you video a herd of elephants, are you unwittingly putting them in harm’s way? How can you be sure their location isn’t recognizable to poachers, even if you don’t geotag the specific site?

“Witnessing the world through the eyes of drones can be powerful, for both good and ill,” says University of NSW senior research fellow Michael Richardson. “It can reveal beauty and injustice, but it can also subject people to unwelcome surveillance. As drones become more and more embedded in how we see the world, a deeper understanding of the ethics of aerial vision will be essential.

Governments have reacted in a range of ways to the rising numbers of drones populating the skies and the relentless pursuit of photographers – amateur and pro – to shoot images and videos that wow.

Civilian-operated drones have been outright banned in at least 15 countries, and the responsibility to know the rules no matter where in the world you are rests on your shoulders. In Iran, two Australian-British vloggers were jailed for flying a drone without a permit near a military installation. Drones are now banned in Iran, as well as Algeria, Morocco, Cuba, Nicaragua, North Korea and Egypt, to name a few.

About 25% of the world’s countries have drone regulations in place, and some are clearer than others. In the UK, you can’t fly a drone within 146 feet (50m) of people, cars, buildings or bridges. In Japan, it’s 100 feet (30m). In Australia, drones can’t be flown into a cloud, at night, or higher than 400 ft (20m), and you need to notify the Civil Aviation Safety Authority before you fly. Drone flyers have to register with the Federal Aviation Administration in the US, and the rules vary depending on whether you’re flying for fun or money.

Country-specific regulations aside, there are rules we can all follow if we want to fly drones with ethics in mind:

• Protect people’s privacy and dignity by keeping a respectful distance away. Hovering over a backyard or peering in through a window is an obvious no-no but consider too whether someone would appreciate being photographed red-faced and sweaty on their daily run or while kissing in the park
• Be aware of your own bias, position and privilege. As Photographers Without Borders outlines in its code of ethics, some widely accepted frames and narratives need to be challenged and changed. Try to represent people and communities as accurately as possible while avoiding stereotypes, ‘white savior’ narratives, shaming or cultural appropriation
• Avoid capturing culturally sensitive events and festivals, such as funerals and sacred rites
• Avoid exploiting a person or community’s grief or vulnerability in times of crisis or trauma
• During emergencies, such as bushfires and other natural disasters, keep your drone well away from emergency operations or don’t fly at all
• Never photograph or video children without at least one adult carer present, or when children are in distress or only partially clothed.

Wildlife are particularly vulnerable to the intrusion of drones, and it may not always be apparent that animals are in distress.

Margarita Mulero Pazmany, senior lecturer in UAV Applications at Liverpool John Moores University has discovered through her research that some animals become so anxious when drones fly nearby that their heart rates increase and they abandon their young to attack or flee, exposing eggs or young animals to predators in the process.

Pazmany says drone operators should consider why they want to fly into or near an animal’s habitat and whether they really need to. “There is simply no way to justify photographers disturbing and potentially damaging wildlife for likes,” she says. “Risking the life of an animal to create a popular online video is unacceptable.”

She advises flying at the highest altitude possible, using a low-noise drone, and monitoring animal behaviour for any signs of anxiety or disturbance. If animals scatter or otherwise change what they’re doing when your drone approaches, back off or reroute your drone to another area that does no harm. 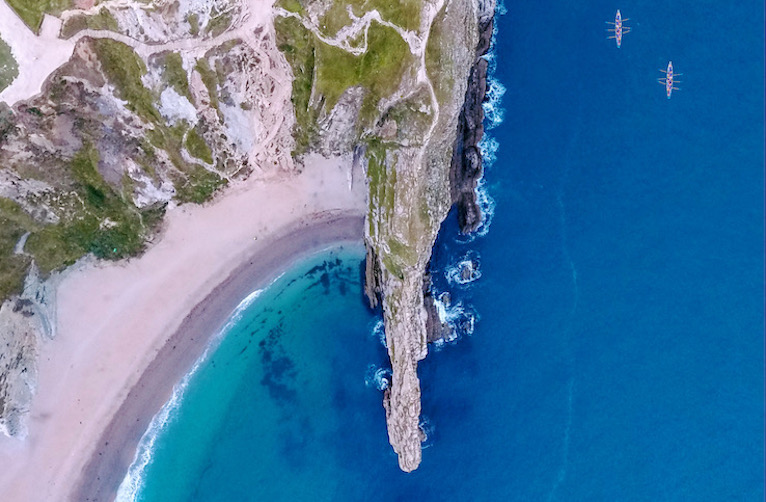 How to Master Drone Photography

Drone technology has rapidly changed in the last few years, as have the rules around where you can fly. Introduction to Travel Photography - Thank You