Adrift between two cultures on a hike around Malta.

The blister on my left toe is bigger than a five-cent coin. It raised its head last night after eight hours of walking, and today – because protests are better with company – even brought along a few friends.

I’m on the final morning of a three-day hike circumnavigating the island of Malta, walking around 25mi (40km) a day through languid fishing villages and scruffy farmland bordered by prickly pear trees, and along paths skirting precipitous cliffs and megalithic monuments that predate the Egyptian pyramids.

Our group of 13 started the trek from the historic capital of Valletta – a UNESCO World Heritage Site and the European Capital of Culture for 2018 – and we’re gradually making our way back there in a loop, 73mi (118km) later. We have no guide, only a map and a keen sense of adventure.

Why on earth am I subjecting my feet to this blistering ordeal? I crave new experiences, and I love the challenge of pushing my body and mind to its limits. But this walk around Malta is more personal.

I have two passports, and hence two nationalities. Although I’ve lived my whole life in Melbourne, Australia, I was born to Maltese parents who emigrated Down Under in 1980, and, when I was 21 years old, acquired my Maltese citizenship through my paternal line. Seven years later, this walk, organized by Move Week Malta to encourage people to be more active, is my chance to connect with my ancestral homeland and learn its coastal curves, step by step.

More importantly, though, I’m hoping to forge new connections with “my people” and uncover a greater sense of belonging. I never really felt Australian growing up, so I pinned part of my identity on being Maltese. It’s pretty common for children of immigrants to feel this way: to be stuck between two different cultures, to hold two disparate identities; to feel a disconnection between your heritage and your accent.

This isn’t a big deal, I guess, for most people. But I felt deeply alienated from Australian society since childhood. I watched soccer instead of Aussie Rules; my parents spoke another language at home; and I had a weird last name teachers and friends weren’t sure how to pronounce. Ultimately, I was painfully aware that I didn’t belong in Australia, and if didn’t belong there, then I must belong in Malta. Right?

I visited Malta with my family when I was 18. It was my second time in Malta, but my first as an adult, and the warmth I received meeting cousins, aunties, uncles, my grandfather – most for the first time – deeply affected me. I was treated, literally, like family, and began thinking that all of Maltese society would accept me in the same way. I felt like I’d finally found a place in the world where I fitted in, a place where I belonged – where my last name was as common as Smith, where soccer was the national sport.

I had high expectations before taking my first steps on this walk. I’d envisioned being welcomed into the group like some long-lost brother, and declared in no uncertain terms that I was officially one of them. But it hasn’t turned out that way.

To this group of Maltese hikers – which included a trio of old mates from school, a psychologist, a couple of personal trainers, even a minor celebrity – I’m just another foreigner who doesn’t speak Maltese, and understands very little of it. To be fair, they’ve been trying their best to bring me into the conversation by translating the most salient bits as we continue our course around the island, trekking past coastal watchtowers built by the Knights of Malta during the 17th century. But I’ve been feeling left out.

My backstory didn’t have the effect I imagined it would either. I thought that my genetic link to Malta would trump my foreignness and break down the barriers between us. But to them, I’m just about as foreign as the thousands of tourists that visit the islands each summer. I wasn’t raised in Malta, so culturally I’m an alien. I don’t behave like them, I don’t talk like them, I don’t see the world in the same way as they do. Unsurprisingly, walking around an entire country gives you plenty of time to reflect.

It’s a little after sunset by the time we stagger into the scout camp in Mellieha Bay, on Malta’s northern coast, to shower, eat dinner, and rest our weary legs. I unfurl my sleeping bag as the sky darkens overhead and the sun visits my family on the opposite side of the planet, and I think.

I think about my Dad and the stories he told about his time in the scouts when he was a little boy, and wonder whether he ever slept in this same spot. I think about all the places I’d seen along the way that day. But most uncomfortably, I begin to accept that I don’t really belong here either, or perhaps anywhere. But that’s okay, because there’s freedom in not being shackled to a national identity. And ultimately, it’s freedom that I crave.

With beautiful beaches, white cliffs, and desert landscapes, this Mediterranean archipelago punches above its weight.

Shaun is a freelance travel writer and photographer. Originally from Australia, he’s been location independent since 2013. He loves writing about adventure, culture and the human condition – or at least getting all philosophical about it. With village festival fireworks happening around Malta from June–September, here's what you need to know about your safety. 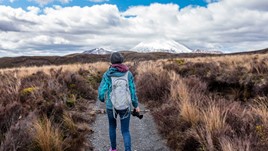 Are You Fit to Travel? 8 Things to Check Before You Go

Whether you're training for an overseas high-altitude trek or getting your gut health right before a trip to India, here's what you need to do before you fly.