Do nature a good turn, and the rewards may be far beyond your expectations.

During my travels, I’ve seen many things that have left me speechless. But one thing that never ceases to amaze me, is nature; it makes its home in virtually every nook and cranny of our world, reshaping, restyling, and reinventing itself to whatever conditions it finds itself in.

One of my favorite creatures are bats, a species as other-worldly as they are charismatic. Wherever I go, I look out for them. I’ve seen vast swarms returning to their caves in India, noisy urban bats jostling for space among roadside trees in Turkey, and massive flying foxes cruising above the pristine white beaches of the Philippines. Yet, without a doubt, my most memorable experience with a bat was in my home county in England.

It didn’t look like a bat so much as a squashed-up lump of brown fur. One of its leathery wings was forced half open, adhered, like the rest of the hapless creature, to the inside of a lunchbox by the remains of sticky label. Ribs jutted out through its scrawny chest – days earlier, at the start of its ordeal, the little pipistrelle had become entangled in fly paper, unable to feed and vulnerable to feline attack. Only a few sparse patches of fur dotted its head; the rest had been burnt off by the stomach acid of a cat.

Amazingly, its tiny chest still rose and fell as it panted weakly. Two small, black eyes watched me as I slowly worked a bud of wet cotton between its body and the lunchbox. After about 30 minutes, the bat dropped free and landed on the cloth I’d placed beneath it.

For a moment it didn’t move, and I thought it must be dead. I wouldn’t have been surprised.

It had been brought to me by a woman who found the bat in her house – or rather, witnessed it being regurgitated by her pet cat. She’d thought it was dead, too, until it started to weakly crawl across the floor like living cat sick. Frantically punching “bat rescue” into Google, she’d seen my contact details come up on a sizeable list of volunteer bat rescuers – trained members of our local county bat group. I was the first to answer, perhaps on account of being unemployed at the time, fresh out of uni, with a degree in ecology and wildlife conservation.

She had well-meaningly placed the bat in the lunchbox, unaware of the sticky bits of label inside, and brought it to me, only realizing her mistake as she handed me the now-fused lunchbox-bat duo.

Half an hour later, I was gently running my fingers over the newly freed animal. To my relief, it had no broken bones, and after a bottle cap of water and a couple of live mealworms, the bat perked up, scuttling across the bottom of its new shoebox home.

For any reader wondering why it didn’t hiss and rise up into the air like a plume of demonic smoke before sinking razor-sharp fangs into my flesh – it’s because that never happens. Despite their ghoulish reputation, most species of small bat (including all species living in the UK) feed entirely on insects, and more closely resemble small, fluffy dogs with wings than Dracula’s alternate form. Some even purr like cats when you stroke them. Naturally wary of humans, they have no desire to attack us, get caught in our hair, or fly around us in great swarms, even if your name is Bruce Wayne.

Bats are the only known mammals to have mastered flight. The complex, acrobatic movements they perform in the sky are aided by their echolocation – the ability to literally see sound. As they fly, bats emit a series of high-pitched clicks – these sounds bounce off surfaces, and are effortlessly picked up by the bat’s large and highly developed ears. This allows the bat to create a visual representation of its surroundings, including buildings, vegetation, and even hapless moths. It’s no wonder I find them so fascinating.

Once revived, I took the bat to the head of my local Bat Society, a woman who has devoted much of her life – and her home – to rehabilitating injured bats. Set in the middle of the oak-forested English countryside, her thatch-roofed house opens onto a garden housing several beehives, the hum of their many occupants filling the air like a droning sigh.

The garden also has a bat-zebo – a large gazebo under which recovering bats can practice their flying. Moth traps pump live prey into the chamber, so the bats can sharpen up any rusty hunting skills.

Inside the house, a room is filled with bat cages – housing tiny pipistrelles, chatty Daubenton’s bats, and even the odd noctule (Britain’s largest native bat species, but still small enough to fit in the palm of your hand), resting here from whatever batastrophe they experienced before rescue. Some were starving youngsters that had fallen out of roosts, others were attacked by cats, or trapped in houses, unable to find their way out before becoming weak and dehydrated. In one cage sat a handful of new-borns, barely larger than the tip of my little finger. Pour a drop of milk into the palm of your hand, and they will lap it up like hungry kittens.

When the time comes, all that can still survive in the wild (which is the vast majority) will be released. I left my tenacious survivor here, confident it was in good hands.

Several weeks later, I received a call: against all odds – being stuck to fly paper for days, swallowed whole by a cat, and then restuck to a lunchbox – the bat had made a full recovery. It was time to release it back into nature.

I waited until dusk before driving out to a quiet part of the English countryside: the front drive of the old farmhouse where the bat had been found nearly a month ago. It was a warm summer evening and the sky was a fiery orange-red. Around me, the air was still filled with birdsong.

Bats cannot take flight from the ground, so to release one it must be held in your hand to warm up before it takes off. The last time I’d seen it, this bat had barely been able to hop a few inches – now it was frantically running around the shoebox, and almost scurried up my arm before I cupped it in my hand. For a few seconds, it was completely still, then I felt a tickling sensation against my fingers as it began to flutter its wings.

I opened my hand and watched the bat flit out into the night air and spiral upwards. It was a magical moment, one I’d experienced several times before during other bat releases. But this time, something new happened.

It was a magical moment, one I’d experienced several times before during other bat releases. But this time, something new happened.

As the bat rose into the sky, more bats suddenly appeared around the side of the house and made a beeline straight for it. They danced around one another before flying off together into the dying light. If bats could talk, I guess they might have been saying something like “Where did you GO?!” “Guys, you’re not going to believe this…”

I later found out that this is a rare, but not unheard of, sight when releasing bats in the places where they were found. Maybe it really was some sort of colony reunion – some species of bats are known for social bonding.

Still awestruck, I stared into the now-empty sky for several more minutes before getting into my car, elated, and driving home.

This experience – seeing that tough-as-nails little ball of fur returned to where it belonged – reminded me why nature will always be worth protecting. Wherever we are in the world, we should always do what we can to ensure this. I hope future generations will be inspired by the incredible natural world in which we live. Ultimately though, what will remain of it for them to enjoy is up to us.

Alex Hatton has explored West, Central, and South East Asia and beyond, tumbling and bumbling, rumbling and fumbling as he goes. 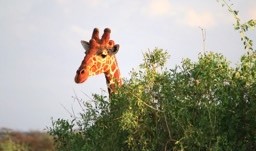