Careening Into the Isle of Skye

What happens when you put your fate in the hands of a charmingly reckless Scot?

No one looked better in a kilt and leather jacket than Eddy the Scotsman. Tussled from head to toe and tossed on to dry land smelling of tan skin and entirely composed of smile lines, he was the walking personification of a twinkle in the eye.

The last time I saw Eddy he was at the helm of a pitching tour bus, crammed with 20 or so wildly concerned American college students, barreling through the Scottish countryside, blasting traditional bagpipe music like it was a Black Sabbath album, while shouting over his shoulder in his incomprehensible rolling brogue:

And that’s how I landed in the Isle of Skye.

About six hours and 200 miles of raw highland landscape previous, I had been in a Glasgow pub, listening to this animated Scotsman regale my group of sapling poets about the northern lands where the Muses surely lived, or at very least vacationed regularly.

He asked if I had ever perched on the once blood-stained stones of a Highland clan’s castle, while gazing at ancient Munros (tall peaks) surrounded by water that you swear was actually the opaque sky, and sipping peaty single malt whiskey made with that very water, distilled not more than a few kilometers away.

No, Eddy, suffice it to say I’ve never done that.

“Aye, lass, then into m’chariot ya go!” And there I was, trying to stabilize my careening body as we flew through the wild hills with what can only be described as the most well-intentioned recklessness of a Scot showing off his native land.

Stepping out of the clamor that is Eddy’s valkyrie tour bus into sheer, blinding sunlight, I let the ringing stop before I re-opened my eyes, prompted by the sound of wind.

I was flooded by the most vibrant of emerald green, radioactive in its brilliance, molded into shapes of tumultuous hills, with beams of the softest sunlight glancing off their torsos in such a way that an atheist would find their god here.

And that sky, iridescent aquamarine, loaded with plump impossibly white clouds like the best damn cup of mallow-overflowing hot cocoa you’ve ever had, churning and pooling up between those hills—or is that water, rather? Water and sky are interchangeable here.

But the air smells like this is where air begins before it collects bits of the world in itself, and the grass so soft and young it could be jersey cotton on your fingertips.

It is absolutely silent. There’s no talking in nirvana.

I got no writing done that day. It seemed irreverent. I simply sat in the sky.

Mackenzie Griffith is an American writer seeking stories and thrills around the world, fueled by several forms of caffeine and a penchant for mischief. 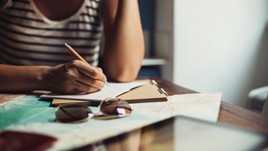 How to Improve Your Travel Writing While on the Road

Ever returned from a trip and forgotten key parts of the experience? Some exercise tips to follow while traveling. The three lucky winners of our 2016 Travel Writing Scholarship are back from their trip Down Under. We catch up with them to hear all about their adventures and what they learned from their mentor.