Home is where the soul is.

The moment I stepped off the plane in Rio de Janeiro, I felt like I was slipping into my own skin. The staticky tropicalia music that twinkled out of the radio in the taxi from the airport brought me a radiating kind of joy. It was the type of music that was always playing in the house in America where I grew up, and its rhythms had been calling to me all my life.

Even though I’m half Brazilian, it wasn’t until I was 22 years old that I first came to Rio. I came on a whim, when other travel plans fell through. But there was no denying that carioca – the local word for a person from Rio – was in my soul.

I grew up watching Disney’s homage to Rio de Janeiro, an old watercolor cartoon where “Zé Carioca” shows Pato Donald (Donald Duck) around Brazil. Disney’s take on the Marvelous City moved me more than my parents' warnings of danger and inequality there. I wanted to Samba down the calçada in Copacabana with Zé and Donald. I wanted to dance in the streets and be free.

Rio enchanted me with its mix of colors, sounds, and smells. From the sizzle and pop of the acarajé fritters cooked in huge vats of oil at the Sunday market, to the rich-purple hue of an overflowing bowl of Açai, to the infectious rhythm of a roda de samba playing on a street corner in Santa Teresa, the Marvelous City teemed with movement, beauty, and life.

Over the next few weeks, Rio unfolded in front of me. We rarely slept, save for afternoon naps taken in the shade of a beach umbrella on the Ipanema sands, surrounded by people of every shade of skin from the blackest of black to sunburnt redheads and blue-eyed blondes. A dozen people lined up in order from dark to light for a photo – I later learned that Brazil is one of the most racially diverse countries in the world. No one was made to feel bad about their color, size, or shape.

For the first time in my life I wasn’t ashamed of my body. I’d spent my life obsessing about being skinnier, but here, on the beaches of Brazil, my curves fit in perfectly.

At night we went out dancing, greeting new acquaintances like old friends and staying up to talk over drinks at Jobi until the sun inched off the horizon. The fisherman on Copacabana sold us fresh oysters by the dozen at daybreak, which we ate with relish and washed down with a bottle of cheap champagne while the city woke up.

For so much of my life I had felt homeless, having grown up mostly in the US, a place I felt a total lack of connection to. I never understood how someone’s worth could be rated on their job title, or how working overtime was a badge of honor. In Rio, we aimed – and often failed – to accomplish a single thing in a day. Growing up, the warmth I gave off when interacting with others was too often misinterpreted. In Brazil, I finally felt free to hug and kiss my friends, without worrying that someone would get the wrong idea.

As I sat at the cafe in the botanical garden watching families wander through the tropical landscape, the children chasing after the tiny monkeys that hung from the telephone wires, I felt I was seeing my own future. These people were like me, and I was like them. Looking at the waitress, who walked with sway that mimicked the quiet lapping of the waves, was like catching a glimpse of myself in a mirror.

I realized that my soul wasn’t as alone as I’d thought it had been. I’d simply been in the wrong place my whole life.

Marisa is a New York Times-published freelance journalist who writes about life at the intersection of travel, technology, and wellbeing. 12 Things I Learned About Brazil While Living in Rio

While living in Rio for three months, Amanda Starkey learnt a lot about the local culture. Here are 12 things you need to know before you go. 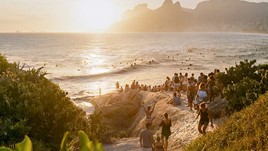