Stranded in the middle of an active drug war, two travelers receive a helping hand they never anticipated.

It had been almost two hours since we passed the last village – not that that was saying much. Our average speed on this rugged dirt road must have been about 6mph (10kph).

We were somewhere in the mountains of northwestern El Salvador, driving our campervan along sharp ridges and through lush coffee plantations in a part of the world I’m sure few tourists ever visit. It was not our intended route – Google Maps had sent us here, and by the time we realized how bad the road was getting, we’d come too far to turn back. But, we were up for the adventure.

As we proceeded, full of unshakable confidence in our little home on wheels, it happened – a small bang on the undercarriage, then, 30 yards (27m) later, flashing lights, crazy beeping, and the van died. The oil gauge plummeted to empty.

Behind us, in a steaming puddle of oil and dirt, lay our oil filter and the giant chunk of metal that connected it to the engine.

We thought this was the end of our trip. As I stood there holding my partner, Sara, we looked around and considered our next move.

The humidity of the rainforest closed in, and the smell of burning oil filled our nostrils. I had no idea where the nearest house might be, or how anyone could help us. A tow truck would never make it up here, and no 4x4 would be able to tow us out.

The words extranjero (foreigner) and peligroso (dangerous) were getting thrown around a lot, and it was making me nervous.

Leaving Sara with the van, I started walking and eventually came upon a small, tin-roofed house. Dripping sweat and out of breath, I went in, asking for help in broken Spanish. The man inside looked genuinely concerned. In a few minutes he had called a mechanic, reporting he was on his way.

Returning with me to the van, he made another phone call. The words extranjero (foreigner) and peligroso (dangerous) were getting thrown around a lot, and it was making me nervous. After he hung up, he told me the area was very unsafe, and that he’d just called the military.

We waited at the van for what seemed like an eternity, but eventually help arrived in a small, beaten-up 4x4, complete with cracked windscreen and a picture of the Virgin Mary hanging from the rear-view mirror.

As they stepped out of the car it was clear – by the gun tucked into one man’s waistband – who was the mechanic and who was not, We were relieved when the gun-toting associate turned out to be the mechanic’s brother-in-law.

The men explained that MS-13, a criminal gang active in much of Central America, had moved into the mountains two years earlier and were in an ongoing war with the police and military. Not really what we wanted to hear.

The van’s problem was quickly diagnosed – but another problem was not so simple. The men explained that MS-13, a criminal gang active in much of Central America, had moved into the mountains two years earlier and were in an ongoing war with the police and military. Murders, with seemingly no motive, had become common. Not really what we wanted to hear.

While I headed into the nearest town with the mechanic, to find parts and oil, Sara would stay with the van and the brother-in-law. On our way down the mountain, we passed another 4x4 filled with soldiers – all armed with M16s and an unbelievable quantity of ammo – who were on their way to watch over Sara while we were gone.

In town, we visited several auto parts shops with zero luck. Desperation was setting in.

As we were leaving our sixth shop, two young men told us they might know where we could get what we needed. Dressed like extras in an early 2000s Ja Rule video, complete with doo rags and bandanas, they were driving a canary-yellow Honda Accord, with its suspension stylishly lowered to the point they almost couldn’t get out of the car park. We followed them reluctantly, but when we arrived at their mechanic, I could see a dozen of the parts we needed, sitting on a table amid a pile of random junk. Deal done, we were on our way, laughing in disbelief at our good fortune.

Back at the van, the sun was throwing a golden blanket over the surrounding mountains, but there was too much fear in the air to enjoy the view. The soldiers sent to protect us held strategic positions all around the area, staying unnervingly vigilant.

We finished the repairs in the dark, with the aid of cellphone torches. I jumped in the driver’s seat and turned the key. The van coughed and grumbled a few times, but didn’t start. Several minutes passed like this: cough, cough, sputter, nothing. Our military escort was growing visibly nervous. At last, the van started and ran perfectly, like nothing had ever happened.

We drove cautiously – the road looked even more daunting at night – the headlights throwing shadows that turned every little rock and bump into boulders and mountains. Our military friends walked next to us, torches darting in every direction, guns pointed into bushes and up hills.

After about two hours, we were out of the danger zone. Our mechanic and his brother-in-law suggested we spend the night at their place. We jumped at the opportunity to stay somewhere safe and get a glimpse of the way local El Salvadorians lived. It was a simple wooden house with a corrugated tin roof and dirt floors. Smoke poured from the fireplace in the kitchen, and chickens, cats, and dogs ran in and out like they owned the place.

The two families who shared the house greeted us with massive smiles and a few shy giggles, some of the women in bright, traditional clothing. Though it was late, they offered us food – rice, beans, and zucchini with homemade tortillas. I’d never tasted beans with this much flavor. Our lives could not have been more different, but we talked and joked late into the night.

The next morning, we went house to house, meeting mothers, brothers and cousins, and drinking incredibly strong coffee fresh from their plantation. Every time our story was told, it was met with the same reaction: either a finger drawn across the throat like a knife or fingers put to the head like a gun. We realized how lucky we’d been to escape with nothing more than a broken oil filter.

Though conditions were basic – everyone cooked over a fire and had dirt floors, and no one had a bathroom – the love and warmth of these people filled us with admiration and respect. What had started as potentially one of the worst days of our lives turned into the most memorable cultural experience of our trip.

Dane Faurschou is a surfer, alpinist and photographer. 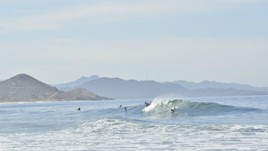