Falling in Love With Indonesian Buses

Traveling overland by bus for 30 days may seem mad – but it has its advantages.

I left Dili with a queasy feeling.

No, it wasn't just the seven drinks from the night before. Or the fly-infused street food I'd cautiously lived off while traveling East Timor – a ferociously expensive backpacker destination – on a budget.

It was the weeks ahead that was causing my nausea.

My plan was simple. I’d travel from the East Timor capital at least as far as Jakarta. In 30 days. And, almost exclusively, by bus.

The Paradise Travel commuter van pulled up, complete with pink decor, sticky vinyl seats, and legroom for the legless.

The roads proved to be grim: pot-holed tracks poorly etched into the hillside, often crumbling into the roaring seas below.

A bizarre mixtape, consisting of nothing more than Johnny Cash and Pitbull, and then Johnny Cash remixed in the style of Pitbull, blasted through tinny speakers at concert-volume.

After 12 hours, we arrived – Cubano-country rhythms blaring – in Kupang, Indonesia.

I was elated – overjoyed! We’d made it! A mouldy, mosquito-infested dorm room had never looked so inviting.

It was going to be a long trip.

For one month, I lumbered along this vast archipelago using a mode of transport most people would see as outdated and hellish.

Those without a fetish for overlanding genuinely think I'm mad. “Why don't you fly?” they ask. “Isn’t it dangerous?” they insist, citing Indonesia’s woeful road safety record.

After that first day on the road, I felt they had a point. And I’ll admit, it was a slow courtship, the buses and mine.

The Paradise hadn’t quite lived up to its name, and the bus network to come was hardly known for its comfort.

Regardless, I plodded on.

As Indonesia’s tourist Meccas drew closer, the buses transformed. Out went the '70s diesel-guzzling minivans and in came coaches, decked in all the luxuries the early 1990s could offer. There were bulging TV screens up front, semi-functioning (and overused) bathrooms at the back, and air-conditioning that dribbled coolant on my forehead as I attempted, what could loosely be described as, sleep.

It was like I was en route to grade 7 camp, but with fewer peanut butter sandwiches (thanks, Dad), and more 3am roadside rendangs.

I get it – this sounds awful. And bussing it did take a toll. I'd go days without showering, rest was rare, though I did devour several books and savored the carefully rationed Oreos I bought along the way.

But, by Lombok, I was in a rhythm. It became addictive. Sick of a place? Flag down the local bus, and enjoy the amused expressions of passengers as I searched for a seat amongst the chickens and sacks of rice.

It was one experience, however, that made the hardship worthwhile, and exemplified how bussing across Indonesia can open a door to experiences of the country I might never have had.

I was on the final stretch. In Denpasar, I jumped on a 16-hour bus to Jogjakarta, my second-to-last port of call.

After two brief breakdowns in the dead of night, I was relieved to be moving again. And then, BANG!

The bus shuddered violently. If not for the slow-going of Indonesia’s highways, I'm sure it would have lost control.

Two tires were blown to smithereens. The driver only had one spare. We were in the middle of nowhere.

What followed was an ambitious repair job that would take the better part of five hours, with the help of a team of local mechanics who emerged from the ether.

Delays can be frustrating. But those five hours exemplified the best of Indonesian patience and comradery.

Not a syllable of complaint was uttered by those on the bus. In fact, laughter and smiles dominated those early-morning hours.

Some passengers had old friends in the nearby village, and took the opportunity to catch up for tea and cigarettes.

Most made new friends – including me.

Five hours by the roadside is a surprisingly good opportunity for a local to practice his English. So I learned a lot about my fellow traveler – about his hometown, his business, his kids, and his hopes for his country.

Tires repaired enough to get moving, the driver summoned us back on board. There was no hollering, no celebrations. Some seemed pained to have to cut their conversations short.

I've caught a few coaches all over the world. Hours stranded on the highway is usually enough to flood Greyhound’s head office with a torrent of angry letters.

But there, in the Indonesian countryside, it was all part of scenery.

Edward Cavanough is an Australian writer and researcher. In 2018, he's traveling overland from his hometown of Adelaide, Australia to London. Ed Cavanough traveled overland from Adelaide in Australia, to London in the UK, making connections with people whose family and friends would serve as life lines. 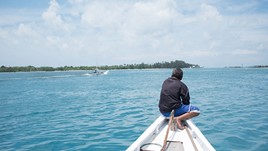 Everything You Need to Know Before You Go to Indonesia

Avoid that overwhelming feeling upon arrival and brush up on these travel tips before you go to Indonesia.

Listen to Episode 13 of The World Nomads Podcast. Which of Indonesia's 17,000 islands to explore, the man caught between warring tribes, and the travel app embracing the sharing culture.