Going with the flow and connecting with the locals on the continuation of their epic journey.

After a few weeks of rest, we were back on the river. To my relief, the same guys agreed to come on this next section. It started with a day of rapids, then it was flat and often slow water all the way to the border with South Sudan, with the threat of hippos never far away. In Tanzania I got bored on the flat sections, but now, I was quite happy just paddling and enjoying being on the river. Have I have cracked that whole “be present and in the now thing” people bang on about?

After eight largely uneventful days, we reached Lake Kyogo. This was a long slog, but we got to stay at some great landing sites (where the fishermen in the village get on/off the water). A couple you wouldn’t know were there if it wasn’t for the fisherman appearing out of the deep papyrus.

One was so narrow we had to leave the raft with some locally-sourced security on the lake while a fisherman ferried us to the landing site. Peter had arranged all of this with the local Chairman.

The Chairman is the elected head of the village executive committee. They are expected to assist in the maintenance of law, order, and security. Every time we arrived at a village, as is protocol we had to notify the Chairman. We would explain what we were doing and ask for their permission to stay in the village and sign the visitor’s book. More often than not we’d also have to report to the local police and show our documents.

In one case the Chairman very kindly invited us to stay at his house. They gave us water to bathe with, fed us, and even gave up their beds for us. Such kind and generous hospitality. One of his granddaughters was a lot less enthusiastic – one look at me and she started wailing. Guessing they don’t have too many mizungus there.

A Bit of Luxury

We made our way up to Murchison and had a fabulous couple of nights at Murchison River Lodge. Such a treat! We made the most of our day off and went on a game drive in the park followed by a cruise up to see Murchison Falls. The next day Chris, one of the owners of the lodge, very kindly gave us a ride in his boat through the delta up to where we could put in. There were so many hippos in this area and they are known for being fairly aggressive – I didn’t want to push our luck.

The End (for now)

A few days later we made it to the take out, as close to the South Sudan border as we could get. And there it was, the toughest sections logistically done and all the rapids behind us. It had been a very steep learning curve and it sure had its challenges. But it delivered in spades everything I was hoping for and so much more – challenge, adventure, fun, adrenaline, cultural immersion, and making friends and new connections. The result is a huge sense of achievement and feeling incredibly blessed to have been able to do this trip.

I’ve been getting regular reports and updates on the situation in South Sudan as well as talking to as many people as possible. The unfortunate reality is that even with visas, approvals, and private security, the risks are still incredibly high, unacceptably so. So sadly, it means I will have to come back and do South Sudan another time.

The people of South Sudan have suffered for decades. They were at war with the North for 25 years until they achieved independence from Sudan in 2011, becoming the world’s youngest country. Two years later, civil war took hold again and other than a brief lull in 2015 has continued ever since.

There is a significant humanitarian crisis there. More than 7 million of the population of 12 million are in desperate need of some form of humanitarian aid, and since the beginning of the conflict one in three have been displaced.

The current peace agreement is in a fragile state and has a long way to go before it is fully in place. The people of South Sudan have suffered for too long. I desperately hope that they see real lasting peace, the end of the humanitarian crisis and rebuilding of the country very soon.

So instead, we’ll fly straight to Sudan, get on the water, and keep going till we hit the Mediterranean Sea!

Sarah is a British-born Australian with a love of sport and a passion for travel and adventure.

Starting off on her epic quest, Sarah Davis faces hippos, rapids, and plenty of uncertainty. 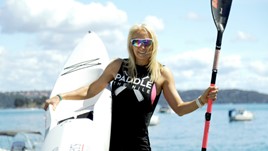 Sarah Davis is an Amazing Nomad - attempting to make history as the first woman to paddle the length of the Nile starting at its source in Rwanda. Mike Dawson is an Olympic slalom kayaker, using sport to fuel his desire to travel and take on the dangers of wild rivers.