How a monument to a dictator became a symbol of defiance.

It didn’t take long for Ajola and her friends to notice us, erupting in laughter as we tried to shake our heads in agreement with the bartender. Aboard a lavish boat-turned-bar in Albania’s capital, Tirana, our heads were thick with raki – the local liquor delivered as both an aperitif and a digestive aid – and were failing the Albanian custom that sees heads shaken for ‘yes’, and nodded for ‘no’.

“Don’t worry about it,” Ajola laughed. “We know that we do things differently here.”

She had come to rescue my sister and me from our clumsy Shqipe, a unique language matched by a unique history. In the mid-20th century, Albania became one of the most isolated countries on earth after communist dictator Enver Hoxha fell out with his comrades in the Soviet Union, China, and Yugoslavia. Now, seven decades later, tourism was still relatively new to the Balkan country, and English speakers wonderfully rare.

“The one thing you must do in Tirana,” Ajola said over another round of raki, “is ride the pyramid.”

The most expensive building in the country, the Pyramid of Tirana was designed by Hoxha’s daughter two years before the fall of communism in 1990. In a country where public works had meant the paranoid leader’s 750,000 bomb shelters, the pyramid might have been a symbol of awakening if it hadn’t come from within the ruling family.

This had to be another misunderstanding with these quirky people, I thought, as we drifted like smoke through the mosaic of traffic on the city’s main boulevard. But standing in the shadow of the monstrosity, the genius of it all pierced through the last light of dusk: while the rest of Europe was tearing down reminders of the not-distant-enough past, Albanians had built a modern ruin.

Like its comrades emerging from the collapse of communism, the 1990s were a chaotic time in Albania, and as Tiranans felt their way around newfound freedom, they didn’t know what to do with the pyramid. Politicians bickered, destruction was ordered and halted, and through inertia, this odd symbol emerged as the way that they wanted to remember Hoxha.

Ajola took off her shoes and started scaling a section of concrete on the pyramid’s face with the blitheness of a cat. The only light left by now was in the reflection of the pyramid’s mirrored windows.

At the top, perhaps six stories high, we sat down, pushing ourselves off with our heels, sliding, laughing, screaming until we reached the bottom and scattered like marbles. Another slide, and we learned how to brace our legs so that we would hit the ground sprinting, head first into the wind, our laughter trailing back behind us into the walls of the beast.

The next night, a group of local kids offered us some cardboard to slide on to save our clothes. Heads furiously shaking in agreement, they, like Ajola, were thrilled that we were participating in the desecration of Hoxha’s memory. As products of Western consumerism, our first response would be to tear the pyramid down. But for the children of the anti-communist revolution, their hopes tempered by a wariness of what may come next, they needed this testament of their city’s history.

Ajola was right: they do things differently here. Sacredness is not something that can be imposed. The pyramid was never in the consciousness of the Albanian people until they let it rot, giving a distinctive shape to their collective memory.

Desecration is not something you typically associate with honor, but the kids of Tirana took great pride in creating a tapestry of arses by which to memorialize a brutal dictator. Shrieking with delight as we sailed down the flank of the pyramid, the darkness illuminated what we could not see – that refusing to remember is not the same as forgetting.

Hailing from Australia, Elle has visited over 70 countries so far, and spent the last few years working as a journalist and travel writer on the road. 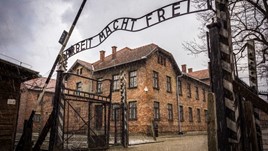