In South Africa’s Kruger National Park, each creature lives out its own drama.

Kruger was scorched; trees stripped and splintered by starving elephants. Heavy with the stink of dust and diesel. We’d skipped the crowded south, where day visitors watched lions through their iPhones, and drove north, to the warm comradery of locals flagging us down to share their luck.

Of the “brochure” safari species, the giraffe’s ridiculous proportions, blunt tufted horns – the ossicones – and comically bland expression should make it the joke of the bush. But this is an elegant animal; herbivorous, deliberate, with a hypnotic lolloping grace. They are common in Kruger, too numerous to stop for every group, but there was something about the way these two bulls were facing off that made us slow.

After a pause, six feet (1.8 meters) of muscular neck was swung like a golf club, thundering into the other with such momentum his knees buckled.

In battle, the giraffe is a different animal. Size matters, and a few casual blows often decide the contest – but the smaller of our bulls was persistent, and the pair traded several punishing strikes. The crack of bone-on-bone shattered the bush. The larger bull swung, striking its opponent's legs with a jarring thump, its ossicones caught below his rival's knee.

He was stuck. Contorted, twisted, and stuck.

The smaller bull braced, hooves planted firmly, then swung into the body of his opponent. Again and again. The large bull bucked and yanked, his neck rippling as his tried to free himself – but he was helpless, his weapon tethered and weakening with every blow. His knees crumbled, his neck folded. Was it broken? Another shattering crack and 1,320lbs (600kg) of defeated muscle slumped into the dry grass.

“Is it dead?” I breathed, unable to look away.

The victor took a few laboured steps, limping forward, his opponent’s body dragging weightily behind. Another step, a kick, and his leg was free. The large bull’s head thumped limply to the ground.

I watched his chest rise, slow and shallow, as the minutes dragged by.

“This is awful. We’re watching him die.”

Then, in a burst of movement, he was on his feet. Not dead, but defeated.

Beneath the leaf litter, beside the parched streams, high in the trees, every creature was living out its own drama, in a vast patchwork of beauty and brutality. A false step or unlucky moment for one, another day to live for another. As one giraffe limped away alive, another won the right to mate.

Perhaps this time, we had all struck a little lucky.

Hear more from the author, plus learn how a hospitality training center in Cape Town is changing lives for the San people.

Bryony is a wildlife conservationist from the UK, where she’s spent most of her career working as a ranger. She’s currently working on projects worldwide (New Zealand at the moment). 7 Things You Should Know Before Visiting South Africa

South African native Mary Holland shares her insights, from little-known wine regions, beaches, and national parks, to the best time to go and how much things cost. 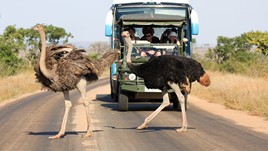