I’d never met an accused terrorist before. Liam was my first, a tall graying man with blue eyes. I followed him as we wound through West Belfast’s web of Catholic neighborhoods – the same ones that Liam and the rest of the IRA had fought for.

The streets were gray and glistening with rain. Ahead of us, wet cement. To our right, wet cement. To our left, a 20-foot barricade of propaganda made of, you guessed it, wet cement. It’s called the Peace Wall, built to divide the Protestant and Catholic neighborhoods of Belfast. Grim murals swept along its surface and out of sight, armies of chipping green uniforms and anti-loyalist slurs compressed into a single, two-dimensional call to arms.

“STAND UP.” Liam hardly glanced at the blinding red slogan. “FIGHT BACK.” The wall bled defiance.

As we walked, Liam described the nationalist uprising in Northern Ireland during the late 1900s. Bombings, shootings, terror, death: the cost of liberation was high. “We had to do what we did, though, at the time. Didn’t all go as we planned it, not all of it was right, but it’s the only way they’d listen.”

We paused at a sky-blue mural while Liam continued to speak.

“I was in prison for a little over 10 years. Most of my friends were dead by the time I got out.” Liam pointed to a face on the mural. “Jim Ryan, he was a good one. Killed the year I went to prison, they shot him at the bakery. Baker was a Protestant, he jumped in the way, tried to save Jim, but the Protestants killed the baker – then they killed Jim, too.”

Liam took me to a break in the wall. Where we currently stood was Catholic territory. Ahead was Protestant Belfast – a place where, 20 years after the Good Friday Agreement, Liam still would not go. “Your other guide will meet you here.” He smiled. “Best of luck.”

I stood, a Catholic, at the bridge between worlds. My new guide, a Protestant, would bring me into East Belfast, the Belfast where Jim Ryan was shot and Liam served his 10 years. My new guide would tell me his story, we would pass his dead friends, he would use the words “sneaky,” “merciless,” and “terrorist.”

We’d go where he ran to when he heard the blast; when he arrived it was rubble, and he followed the screams, and he found an arm reaching and he pulled the arm free, but no person came with it.

My new guide, the Protestant, had arrived. His eyes were also blue. He stretched out his hand in greeting, and with a smile I stepped into his half of the world.

Based in the United States, Madeline is an aspiring travel writer whose adventures began in Pamplona, Spain. She has studied writing in the U.S., Dublin, and finally Argentina as a winner of the 2018 World Nomads Travel Writing Scholarship. 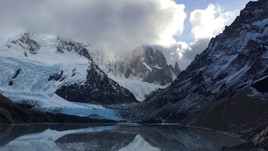 Madeline on assignment in Argentina

As a winner of the 2018 Travel Writing Scholarship, Madeline Russo from the USA discovers the life of a travel writer.