After a devastating accident, a trip to Alaska proves to be the best therapy of all.

I was destined to end up on a helicopter that year, one way or another.

After they cut me from the wreckage of my car, I heard later, I would have been taken to the hospital in a helicopter instead of an ambulance, if not for the bad weather.

Now, nine months later, I stood in a parking lot on a bright summer day in Alaska, facing a row of small, red helicopters. I had only just returned to work, car rides still scared me, and my doctors weren’t sure when I would be able to walk on my own again. Yet for some reason, I had not only said yes to going on a work trip clear across the continent, but I had signed up for a helicopter tour. I clutched my cane anxiously.

A trim man briskly approached me.

“Hi,” he said, “I’m Mark, your pilot. Listen, like my wife said on the phone, she went through a similar car accident to you, broke a lot of the same stuff. I get some of what you’re going through. I know you’re nervous, but the visibility today is unusually good. I want to change the tour from 30 minutes to 60 minutes, and add a glacier landing. No extra cost! After everything you’ve been through, we’d be happy to show you more of Alaska. I just wanted to check if it’s okay with you first.”

“Thank you,” I said, extremely touched and extremely alarmed. “But – I need this cane to walk. I don’t think I can use it on ice.”

“I’ll help you on the glacier. I’ll look after you the entire time. I think you’ll be okay. But it’s completely up to you.”

How often would I have this opportunity? Fighting down panic, I said, “Yes.”

I squeezed my eyes shut as the chopper lifted off in a whirl of wind and noise. I opened them again – and saw beneath me rolling hills of pine trees. I felt my pulse slowing as my eyes drank in the lush green. Gradually, patches of white snow appeared, until we lifted over a ridge and a stunning, fairytale landscape spread out before us. Ridged mountains capped with white rippled to the horizon, a ribbon of water gleaming between them. A feeling surged through me. Not fear…

Eventually, we came to an expansive ice field, its crevices glowing an ethereal blue – the glacier. We landed at a flat field of snow and rock. I held Mark’s arm and my cane tightly as we gingerly moved from the helicopter onto the glacier. On all sides, a sea of blue and white flowed back to meet mountain peaks. When had I last felt this happy?

A cold wind picked up, and sudden musical notes rang out.

It was coming from my cane! The wind was playing through its height adjustment holes like a flute. I moved the cane up and down, and a melodious song trilled through the crisp air.

I discovered I was crying. Lowering the cane, I blurted, “For so long my life has been a couch and physical therapy. I think I forgot that the world can be beautiful. And I almost missed this because of fear. I used to be so adventurous, and now I’m always scared. What if that never stops?”

“Used to be adventurous?” Mark answered, eyebrows raised. “You’re standing on a glacier in Alaska – with a cane.” With his face filled with compassion, he said, “Long recoveries are hard. My wife struggled too, but she’s okay now. You’re strong, or you wouldn’t be here. I know you’ll be okay, too.”

At a loss for words, and filled with warmth, I turned back to the mountains and sky. I lifted my cane until the wind sang through it again. For just a moment, I could understand the words to the song, and they were that I was strong, and I was brave, and I would be okay.

James Taylor discovers the living entity that is Vatnajökull glacier – and learns how vulnerable it is despite its massive size. 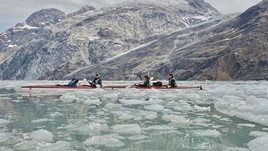