Confessions of a Romantic Traveler

Choosing love over fear in the medinas of Morocco.

That’s how the conversation went when I mentioned that I was going to Morocco. Some friends thought it foolish for an American Jew to be traveling to a Muslim, an Arab, country these days.

“Get real,” they scolded. “It’s a completely different world now. You are being naïve. You are too romantic.”

In my younger years, I wandered innocently around the globe. My hippie adventure included hitching a ride on a tramp steamer, driving from Switzerland to Pakistan in the dead of winter, living with a Turkish fisherman family, and hitchhiking across Australia. I sought affinity, beauty and wonder. And above all, I sought the romantic – meaning, “characterized by, or suggestive of an idealized view of reality.”

I still seek it.

Yet today I find myself out of step with many Americans who have no desire to leave the country and never have. Even for those who travel beyond the US, the idea that foreign travel is romantic sounds wrong – dated, naïve, politically incorrect, old-fashioned.

So, I say that in these times we need Richard Halliburton – the one they called “The Horizon Chaser.”

As a child, I had read my father’s well-thumbed books by this most dashing and enthusiastic of American travelers. His titles alone, The Royal Road to Romance, The Flying Carpet, and The Glorious Adventure, told me I was in for an exciting read. Best of all, Halliburton lived in San Francisco – so did I – and in his Book of Marvels, written for children, he declared that in San Francisco, you were at the edge of a continent and so at the brink of the unknown. From San Francisco you could so easily sail away to what he termed “strange and romantic lands.”

In the 20s and 30s, millions of Americans were swept away by Halliburton’s prose, though, in my older years, I didn’t consider him the thinking person’s travel writer.

Yet when Susan Sontag, the renowned intellectual, was asked which writers had changed her life, she named Richard Halliburton at the top of her list.

“Halliburton,” Sontag said, “made me lustfully aware that the world was very big and old; that its seeable wonders and its learnable stories were innumerable; and that I might see these wonders myself and learn the stories attached to them.”

Exactly! That’s how he had made me feel too. So, I went to Morocco.

Yet all the warnings took their toll. On my first day, I found myself the only foreigner aboard a crowded 2nd-class train car on a seven-hour ride to Fez. I remembered the warning, “All Muslims hate America now.” Yet here I was with five Arabs, squeezed together in facing seats. The four bearded men, wearing jellabas and small turbans, and the young woman, in an ankle-length dress and white headscarf, all sat stone-faced.

I stayed silent as a dummy, afraid to ignite attention. After a couple of hours, the young woman opened a large blue plastic basket and offered us all some of her lamb lunch. The talk began with Merci, then gradually progressed. Soon we were talking, all of us, in French and English, swapping ideas about everything from train speeds, to Israeli irrigation systems, to Thanksgiving turkey roasting techniques, to Andalusian music, to taxi fares.

If I had heeded my friends’ warnings, I wouldn’t have experienced the dreamlike vision of the Jama`a el Fna under a Marrakech moon. In this vast square, illuminated by only the flickering gas lanterns of the food stalls, snake charmers, dancing monkeys, henna tattooists, and storytellers appear to you like apparitions before disappearing again in the crowds.

In Meknes, I would not have seen the tiny dark-eyed boy, sitting with his grandfather on an upturned green wheelbarrow, suddenly stretch up to kiss the old man’s ancient cheek. And, I certainly would not have spotted the young man walking a furrowed field, singing and sprinkling seeds from a leather bag strapped across his shoulder, looking as if he had stepped out of the 15th-century Book of Hours.

Nor would I have heard the soft strumming of an oud, an Arab lute, wafting across the Fez night like a whispered secret. And, I would not have heard the itinerant Gnaoua troubadours in the streets of Essaouira, singing the trance-like music of 16th-century Sudan and Senegal.

And, in Essaouira too, I would never have met Fatima, the 17-year old sister of our innkeeper, who strolled with me at night through the labyrinthine alleys after two hours of bathing and socializing at the ancient hamam. I would have missed the chance to sit with her in the shadows of the medina, drinking Fanta and sharing who we were. I would not have learned Fatima’s dearest wish: to come to America – to play professional basketball!

These remembrances of Morocco are forever mine simply because I went. And because I went, I bore witness to a nation’s tender moments.

Richard Halliburton said, “I wanted the freedom to search the farthermost corners of the earth for the beautiful, the joyous, and the romantic.”

Of course, “romantic” also means “conducive to or characterized by the expression of love.” And for me, the romance of travel is about love. I court the unknown. I develop crushes on countries. I moon over my memories of “seeable wonders.”

For without the unforeseen glimpses of grace that travel has given me, how could I ever know the world and love it so?

Travel Writing Scholarship Winner Claudia Crook shares her favorite American holiday – Thanksgiving – with the Moroccan hosts who have treated her like family. 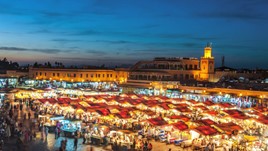 How to Stay Safe in Morocco's Souks and Medinas

Morocco's markets are a colorful, and often confusing, maze of alleys, shops, and craftspeople. Here's how to navigate them safely.