Crime in Belgium: What Travelers Need to Know

Belgium is a safe place to visit but you can run into trouble, especially in its busy capital, Brussels. Find out how to stay safe while traveling with these tips.

When planning your trip, keep in mind that serious crime is rare in Belgium, and while its biggest cities – Brussels and Antwerp – have had a reputation for being unsafe, even opportunistic petty crime has become less prevalent in both over the last few years. Still, you should exercise the same caution you would in any large city: pickpocketing and bag or phone snatching is not uncommon.

Brussels
The country’s bustling, multilingual capital is the centre of the EU and NATO organizations, and draws travelers to its historic streetscapes and Belgian specialities such as beer, chocolate, waffles and frites. It’s also the most likely place you’ll encounter security issues, of all kinds. Brussels’ three train stations, Brussels North Station (Bruxelles-Nord or Brussel-Noord), Central Station (Bruxelles-Central or Brussel-Centraal) and the South Station (Bruxelles-Midi or Brussel-Zuid) are all known for pickpockets and scammers, who target tourists weighed down with luggage.

This is particularly the case atBruxelles-Midi or Brussel-Zuid, usually referred to simply as Midi, the international hub and Eurostar terminal. A tip: it may be only a 20 or so minute walk from here into the center, but if you’re hauling a suitcase, it’s easier to jump on a local train to Bruxelles-Central – free with your Eurostar or Thalys ticket – and you’ll avoid the surrounding neighborhood, which can be a little daunting to first-time arrivals to the city.

Ordinary Brüsseleers are faithful users of the highly efficient, cheap metro-tram-bus network and you should by all means join them. Do be vigilant about your belongings though, especially phones and other devices, as pickpockets use these networks, too. There have also been reports of small groups of young men preying on tired tourists in metro stations at night – try to not sit far from others or to look disorientated. Familiarize yourself with your prospective route via the STIB-MIVB site before you head out and load transport passes onto a MOBIB card (you can buy these from kiosks at the major rail hubs and most metro stations).

Tourists are often warned off visiting a few Brussels neighborhoods that are less economically flush and home to large immigrant communities. While you should be careful around Saint Josse, the Gare du Nord-Liedts-Cage Aux Ours areas, plus the red-light district around Midi station, especially if you are a woman, don’t avoid all of Marolles, Molenbeek or Schaerbeek. Parts of these diverse areas are well on the way to gentrification, such as Ixelles a few years ago, and offer up some lively studenty bars, great cheap eating options as well as quieter residential streets. The center too has some dodgy pockets, often differing greatly from street to street, but these are easy to spot and avoid. Again, it’s more a matter of doing your research, and being aware of your surroundings, especially at night, than steering entirely clear.

Flanders
Petty crime is far less prevalent in the Flemish cites of Antwerp, Bruges and Ghent than it is in Brussels. The historic centers of each, where tourists head to first, especially that of ever-thronged Bruges and Grote Markt in central Antwerp, are again places to watch your bags, pockets and phones.

Antwerp was, in the 14th century, one of Europe’s largest and richest ports, and has a red-light district that you’d expect with this long maritime history (its name, Schipperskwartier – skipper's quarters – reflects this, too). Once known for crime and vice, the industry was tightly regulated more than 20 years ago and is now strictly confined to three streets, with a police station in the middle. Situated between the center and fashionably redeveloped docks area of Eilandje, Schipperskwartier is a thoroughfare between the two,  and has some great authentic pubs and legendary nightclubs to visit, away from the ‘window’ streets. It’s not unsafe, but women alone late at night might feel uncomfortable in the window streets. The city’s former working class neighborhoods to the west are similarly safe, with the caveat re personal belongings as ever, and offer a great diversity of eating options, artist’s studios and hipster haunts. The area between here and the center, around the main station, Antwerpen-Centraal, can feel a little sketchy though, with some obvious drug dealing going on.

Bruges attracts huge numbers of tourists each year and its tight canal-fronted streets can get very crowded – watch for pickpockets when in tights spaces and on the main squares, as well as on the train there and back from Brussels. Similarly, in the historic centre of Ghent, although this city’s large student population make it feel more authentic as well as relaxed and safe.

Wallonia
You may encounter petty crime in the industrial and university cities of Liège and Charleroi, so as in Brussels, be aware of your belongings. Note though, there’s really not much greater risk than in any city in Europe.

One of the most convenient ways to get to and around Belgium is by train, so you're likely to encounter at least a few of its train stations.

Once your train arrives, keep an eye on your belongings, especially phones and laptops. Pickpockets have been reported to operate on international trains, especially the Paris-Brussels and Amsterdam-Brussels Thalys routes. If you can afford to spring for first class (pre-booking online can mean its costs only a little more), do, as these carriages are far less crowded and have more staff in evidence.

Professional thieves often work in teams of two or three and use a range of techniques to distract their victims such as asking for directions, spilling food or drink, or telling them someone has spilled something on their clothes.

Avoid placing bags in the overhead compartments where thieves can easily grab them when you're sleeping. There have also been reports of bags being stolen from the racks at the end of carriages, normally just before the doors close for the train to depart, so also keep a watch on these at this time.

Driving in Brussels is not great due to its terrible traffic, but if you do drive, be aware that theft from moving or parked cars, is not unknown. Thieves position themselves at traffic lights or pull up on motorbikes, scan for valuables and either smash the window or reach in through the open gap and take off unsecured handbags, phones or wallets, so keep these out of sight and reach, and drive with the door locked. To avoid theft while your car is unattended, park in secure areas or parking garages where possible.

Stationary car theft is also not unknown in Antwerp, again best to park in a secure area or a parking garage.

There were a series of terrorism attacks in Belgium in the 2010s, including the tragic Brussels suicide bombings that killed 32 civilians in 2016. This wave of violence is often attributed to the fact that there is a large immigrant population and significant social inequality in Brussels, as well as it being the symbolic centre of Europe, with NATO and the EU headquarters located in Brussels. Along with Islamist extremist attacks, terrorist violence from sections of the far right is also considered an ongoing threat.

That said, there have been only three minor, lone-actor attacks since 2016, and none at all since 2018. There are increased security checks in place at international airports and train stations, all part of robust domestic security efforts, along with the thwarting of attacks in the planning stages.

While traveling in Belgium, you are legally required to carry identification at all times, again, part of an active counterterrorism policy. If you are concerned about having your passport with you in a busy area or at night, at least carry a photocopy of it and some other form of identification, such as a drivers licence or student card.

Find about the latest travel warnings for Belgium here.

The official emergency number is 112, where you can reach all emergency services and then you will be re-directed to the department you require: police, ambulance or fire brigade. Many police officers in Belgium’s cities are fluent in English.

Get a travel insurance quote for Belgium What are the issues affecting travelers to Belgium? Read the latest travel warnings and alerts. 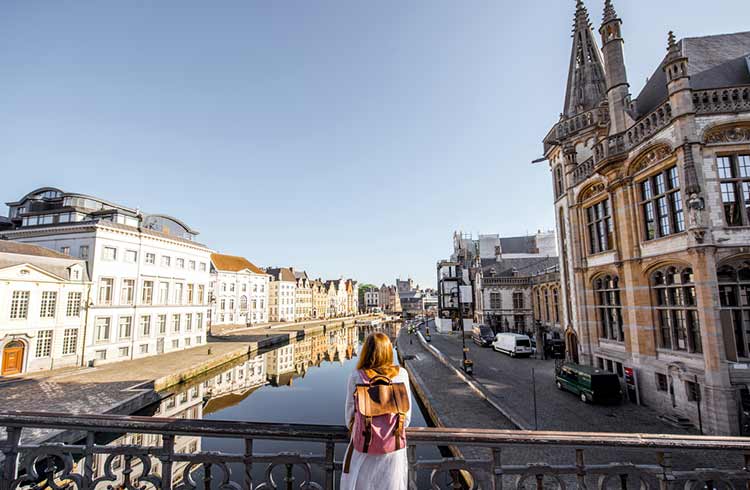