It's no surprise France is one of the most visited travel destinations in not only Europe, but the whole world.

This fact is not lost on local con artists, who have come up with a number of scams to outwit travelers of their hard-earned cash in France.

These scammers can be charming, and their methods are sophisticated. Get to know the tourist traps before you go – chances are these con artists will see you coming long before you see them. Here are a number of common travel scams in France.

If you haven't been approached by men, women and children holding a gold ring in Paris, well then you probably haven't been to Paris!

This scam is an oldie but a goodie. And it can occur in any of the major Parisian tourist hubs including the Jardins des Tulleries, Musee D'Orsay, along the Seine, Madeleine, Arc de Triomphe, Champs Elysees and near major Metro train stations.

Unsuspecting tourists, especially couples, will walk by a young man/woman/child who will pick up something shiny on a sidewalk and squeal with delight – "My lucky day!" and show the bystanders a gold ring. They will then offer it, and tell them to keep it. If the bystander stupidly does, the person will ask for money, his or her share in the lucky find.

There are variations on the scam. In one, the scammer will hand the gold ring over, in an "honest" attempt to hand it back to the "owner". This is to gain some trust.

By the time the bystander protests it's not his ring, the person is asking for money to buy lunch, train fares, to feed their starving children etc. In the worst case scenario in the exchange an accomplice pickpockets your wallet. If you see a gold ring - don't stop, don't engage. Walk on. They will keep going until they find another victim.

Another scam which can catch out any traveler is the stuck bank card in the ATM. If the ATM machine does not return your card, do not leave the machine and call authorities or the bank. A travel blogger reported seeing someone in Marseille lose their card to a scammer who removed the fake insert slot area and took their card when the owner of the card left the machine to seek help.

It's not uncommon in Paris to be approached by men who are collecting money for landmine victims, orphanages, or any other worthy cause you can think of. They are often found in tourist strongholds, like the area around the Louvre. If they don't look legit (e.g. no identification), don't hand over the cash.

Contrary to popular belief, French people are anything but rude. In fact they are genuinely polite and helpful. But if you suddenly find yourself surrounded by poorly-dressed locals offering to help carry your luggage at train or bus stations, politely decline. They work in packs of 3-4, surround and distract you. One will grab your bag being 'helpful', while her accomplice will grab your wallet – which is rather unhelpful.

Begging can be the domain of distraught, desperate-looking women and children. They often have the long dark hair, and flowing ankle skirts. The kids will ask if you speak English, and when you answer they will give you a card upon which will be a tale of woe, similar to "my mother is overseas dying and I'm stuck in Paris with no money, please help me get back to her."

They are at major tourist attractions, and the big RER (rural and suburban trains) and Metro train stations, including Gare du Nord and Chatelet-Les Halles. The tip? Don't get sucked in.

Where you see groups of people, what appear to be locals, hanging around a gambling stand and playing – approach with caution. It will always be in crowded tourist spots.

More likely than not, those playing are accomplices of those running the ruse. One of the most common "games" involves three black rubber coins, and guessing which one has a piece of white paper underneath it.

You will not win. They switch hands, and never let you look underneath the coin yourself. If you have been ripped off, yell at them loudly (in French if possible), and refuse to let them go. It will alert other unsuspecting tourists that the game is rigged. Better still, don't play the game!

Another oldie, but a goodie. At crowded tourist areas – such as the Sacre Coeur chapel in Montemarte – be wary of men who attempt to show you a magic trick.

This involves tying a piece of string around your finger. While you're overwhelmed and distracted by his spiel – and your arm disabled – an accomplice will pickpocket you.

C'est la vie, you may sigh as your wallet full of Euro's, intended for buying cheap Parisian 1920s poster art at the nearby market, is gone.

And finally, apart from the streets of Paris – and other tourist regional hubs like Lyon, Marseille, Nice and Cannes – which happen to be littered with gold rings, you may even need to be wary of the humble morning jogger.

Many unsuspecting tourists have fallen prey to the clean-cut jogger who "accidentally" bumps into them – especially in Paris.

The jogger frantically starts apologising, trying to help the tourist to their feet (if they knocked them to the ground), and in the process nicks their bag, wallet, or backpack, and keeps on running.

Many Parisian restaurants, especially in the heavily populated tourist areas of the Latin Quarter and Champs Elysee, make a living ripping off tourists who struggle speaking French. The Prix Fixe meal is a set price menu, usually at lunch times, that changes daily. It's a good option for those who can't read French, and therefore have no idea what they are ordering.

Best tip when choosing a prix-fixe meal, point to it on the menu or board and repeat the price. Using eye contact helps as does attempting to use any modicum of French you can.

Even in upmarket "traditional" French restaurants in Paris, a spiteful maitre d' may bring you exactly what you ordered. One traveler reported her very unappetizing experience:

"It could only be described as chunks of semi-raw meat from something or someone that was slaughtered in the kitchen. I gasped when it came out, noted no one in the restaurant had ordered anything remotely similar, and hardly touched it - yet had to pay for it."

Use a French phrase book or app that way you can at least look at the menu and know what each dish is. If you end up with a meal you didn't order, and a bill that far exceeds what you ordered, complain loudly and if that doesn't work, leave without paying.

There are some establishments, especially in Paris, where you don't want to be handing over your credit card and starting a bar tab without seeing a menu or price list.

Be particularly wary of strangers that invite you for a complimentary drink or show at a private club.

One of the worst places for this is the area of Pigalle, where you'll find the famous Moulin Rouge.

Some tourists who have visited or been coerced into the seedy bars in this area have run up exorbitant bar bills without knowing it.

If you visit an "adult show" under no circumstances order a drink for yourself or the workers without seeing the price list first. It is not unheard of to be charged 600 euro ($800) for two drinks. And threats of violence are used to force tourists to pay their bill if they dispute it.

If there's a scam to be had, someone in Paris will execute it. This scam isn't widespread, however reports from tourists confirm the '1 Euro only' water sold by mobile vendors can be as dodgy as they come.

A vendor was seen filling up water bottles he sourced from garbage bins at a nearby fountain in a park near Palais de Chaillot.

Stick to buying your bottled water from a shop. Better yet, fill a reusable bottle of water and carry it with you during the day. 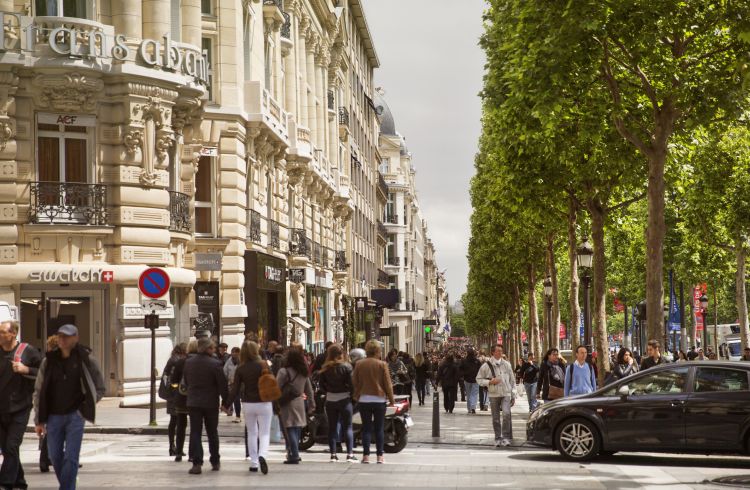