It was the roosters that woke me up – that, and the smell of dried coffee beans roasting over an open fire.

Bleary-eyed, I opened the window to my farmhouse room and saw the fog creeping up the mountain-side. Obscuring the small coffee trees that dot the landscape for acres up and over the hills, which border the cluster of wooden homes belonging to the extended family of Ana Martinez Almaquer and Senen Diez Moreno.

We were about as far away from Havana as one can get – and still be in Cuba.

It was only a little after sun up, but the day had already begun on the coffee farm, in the small town of Palenque outside of the city of Guantanamo.

The family has owned the land for more than two generations, and dotted among their robon, caturra, traditional, and robuta varietals of coffee trees, they also have citrus and banana trees, a large personal garden, three pigs, and two cows – which, according to Cuban law, they are allowed to milk but not eat – as well as chickens that graze across the property.

To harvest and process the coffee, the family hires a few locals to help pick the beans, which must be done by hand. One woman, who had been working with them for years, had built herself a small sled, which she drags behind her across uneven ground, between coffee trees interspersed with palms and banana trees, all providing shade and keeping the soil nurtured.

The hard, berry-like seeds turn red when they are ripe, and she collects them in burlap bags to be weighed when she returns to the main house.

Once harvested, Senen spreads the coffee beans over a concrete palette in front of the house, raking them a few times a day until they dry.

Once dried, they can sell them – they have a contract with the government to harvest and process a certain amount of coffee per year, and only after that amount is reached may they consume what is left.

But still, there is plenty of coffee – and they have enough for visitors and daily coffee breaks mid-morning and mid-afternoon.

Out back, Senen started a fire in an open hearth to roast the dried beans in a large pot.

For about a half hour a batch, family members took turns shaking the hot pan and moving around the beans, creating wafting smoke. These were then set aside to cool.

Previously roasted beans from the day before were ground by hand, and would soon be made into oil slick coffee on the inside stove.

While Cuban coffee is traditionally a strong, espresso-like coffee, sweetened with sugar and lightened with milk, in modern Cuba, milk is often scarce or expensive. Here, a pan with fresh milk from the cow that morning was slowly heating to pasteurize, and for the first time on this trip to Cuba, I would be able to have café con leche.

Ana finished percolating the pot of coffee, and asked if I wanted a cup. I’d been offered Cuban coffee at breakfast, and at every household I visited here in Cuba’s southeast corner, it’s always served in demitasse cups; heavily sweetened and black. But here, so close to the source, I wanted to taste the flavor of the beans.

“To taste the flavor,” I explained in Spanish. Laughing, she obliged, and made herself a sugar-less cups as well, good-naturedly exclaiming at its bitterness. She had never before tasted a black coffee.

“First time for everything!” I said, sipping mine out of a chipped espresso cup, with plenty of milk, spooned straight from the pan.

“And my last,” Ana said with a smile, before adding two spoonfuls of sugar to her cup. Cost Guide to Cuba: How to Budget on Your Trip

Our friends from Goats on the Road help explain what you’ll need to budget for on your travels to Cuba. With essential info on ATMs, and a guide to understanding the currency. 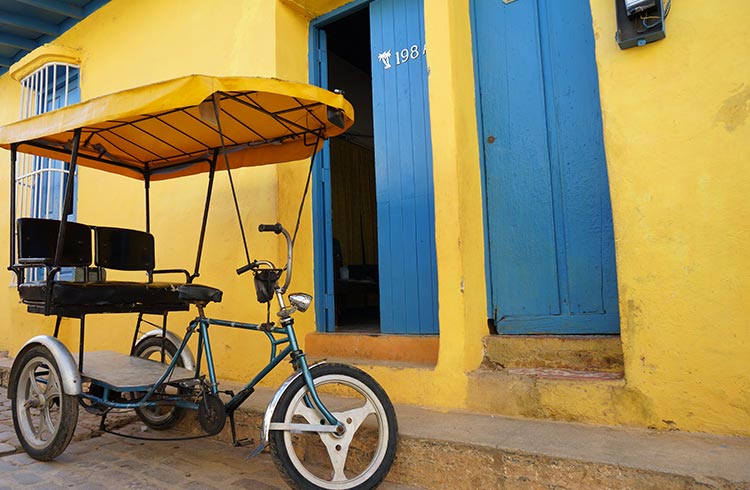