High above this Caribbean island’s idyllic white-sand beaches looms the still-active volcano that created it. Bill Fink braves the windswept climb to its peak.

Note: La Soufrière erupted on Friday, April 9. There were no immediate reports of casualties, but scientists warned that the eruption could continue over days and even weeks. Residents and visitors are advised to stay away from the area until further updates are provided.

It feels like the end of the earth – or the beginning. Billowing fog obscures my sight, whipping winds rattle my rain jacket, and mud coats my shoes as they crunch on black lava rock. Bright green grasses cling to the trail beside me on knife-edge cliffs, looming above the crater of the still-active La Soufrière volcano on the island of St. Vincent.

The scene atop La Soufrière is as it could have been hundreds of thousands of years ago, when it belched forth mountains of lava to birth the island from the depths of the Caribbean Sea. The lava was accompanied by vast, sulphurous clouds of gas, for which the now 4,049ft (1,234m) mountain was named. Eons later, the volcano has calmed and the island is covered in tropical greenery from peaks to craters.

La Soufrière’s eruptions continued periodically, including the 1902 disaster that killed more than 1,500 people. Tracking stations now monitor the volcano, safely enabling evacuations well before the most recent eruptions in the 1970s. After its 40 years of relative dormancy, I can’t even smell La Soufrière’s eponymous sulfur fumes while standing right above the crater.

As I ponder La Soufrière’s destructive power, the mists part to reveal the majesty of her creation. The island of St. Vincent spreads 360° around me, a tropical paradise of flowering trees, soft green hills, clear mountain streams, and majestic waterfalls, ringed by white and black sand beaches, lapped by the calm blue waters of the Caribbean.

Looking into the crater, I survey a primeval setting of waterfalls tumbling down black rock cliffs, multi-hued lakes, and a towering jungle straight out of Jurassic Park. I half-expect a T-Rex to burst from the banana trees and chase skittering herds of prey. It is a spectacular, other-worldly setting that makes the challenging hike to the top well worth the effort.

My trip started in the capital of Kingstown, about an hour’s drive to the base of La Soufrière. I had booked a guided hike with Sailors Wilderness Tours. While the trails up La Soufrière are fairly well marked, a licensed guide is not only required for visitors, but beneficial to ensure you stay on the best path, and to provide an education about the volcano and St. Vincent along the way.

Our hike begins at the trailhead partway up on the windward side of the island (there’s a longer and steeper trail on the leeward side). We walk alongside a banana plantation, see bunches of bananas wrapped in bug-proof, blue netting that makes them look like Christmas gifts for monkeys. We stroll along a wide, clear path, slowly ascending on small foothills divided by gently flowing streams. The hot, humid climate requires multiple water breaks at basic, covered rest stops.

As we progress, the temperature cools, and we enter the Cloud Forest zone of the mountain, bathed in near-perpetual mist, providing a serene setting, but making the trail a bit slippery. Our guide collects walking sticks for us, helping our balance and making us feel like intrepid explorers.

We ascend the steeper, rocky upper zone of the mountain in clouds of fog, glad for our experienced guide. The wind and misting rain increase as if La Soufrière is actively trying to keep us from her summit. Poking with sticks, shuffling our boots, huffing and puffing, we make it to the crater rim, where the spirit of La Soufrière blows a few final powerful gusts, then relents to part the clouds and reveal her natural majesty.

Reluctantly descending from the peak, we reflect on the rewards of leaving the beaches to explore the wild side of St. Vincent. We now have a deeper understanding of the nature of the island, as well as a good excuse to enjoy a well-deserved rum cocktail back at the beach bar.

The trailhead to La Soufrière is about an hour’s drive from the capital city of Kingstown. From there, it’s about a two-hour climb to the crater rim. The trail is often wet and crosses streams, as well as rough, rocky patches, so wear sturdy, water-resistant footwear, and bring a walking stick and plenty of water. While the trail begins in hot, humid jungle, the weather on top can be very windy and chilly, so it’s wise to bring a light rain jacket.

Hikers must comply with all rules and guidelines set out by the Government of St. Vincent and the Grenadines’ National Parks: no glass bottles, alcohol, smoking, or loud music is permitted on the trails, and it is required for non-residents to hike with a certified guide. I was happy with Sailors’ Wilderness Tours (US $95 for the six-hour trip and lunch, including transport), and other local options are available. For more information, see the National Parks website or the national tourism website at discoversvg.com.

Hear more from the author, plus learn about safety in Jamaica, bomba dancing in Puerto Rico, and the hidden Dominican Republic. 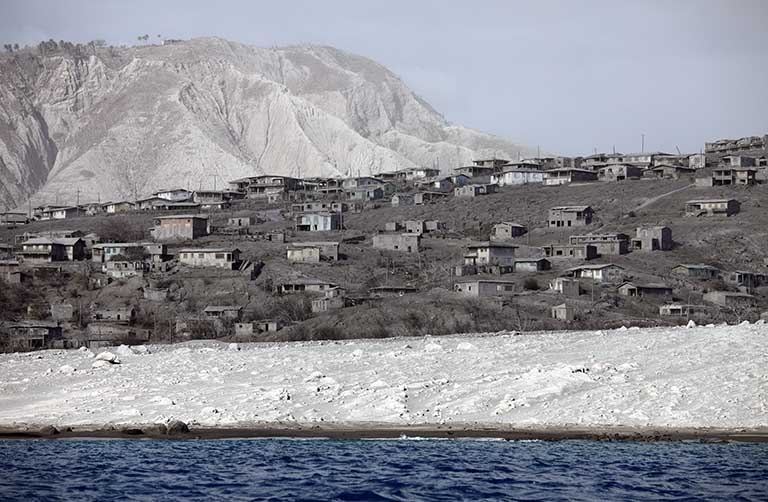 With abandoned churches, clock towers, and hotels half-buried in ash from a volcanic eruption, Montserrat's capital is a modern-day Pompeii. What You Need to Know Before Exploring Volcanic Landscapes

Ian Neubauer talks to a number of volcano experts about how to stay safe when traveling to active volcanic destinations. The Caribbean: When to Go and How to Get Around

From avoiding tropical storms to the challenges of moving between destinations, a trip to the Caribbean can take some planning. Check out these useful tips from an expert on the region.