What You Should Know Before Visiting Kazakhstan

This vast and beautiful Central Asian country is very different from how it’s portrayed in the Borat films. Before you travel there, find out what to see and do and how to get around.

There's quite a lot you may not know about this country of proud nomadic traditions, multitudinous landscapes, and elegant cities at the heart of Central Asia. Stretching from China on its eastern border to the Caspian Sea on its western edge, the world's ninth-largest country offers a an equally huge variety of experiences. Having visited Kazakhstan six times since I've lived in neighboring Kyrgyzstan, here are the top things I think visitors should know.

What to do in Kazakhstan

Explore the cities: Nur-sultan and Almaty

Hipster coffee roasters and craft brewers, Russian houses with gingerbread trim, starchitect-designed landmarks, and the world's largest tent; Kazakhstan's cities offer a mix of kitschy and cool. Visitors tend to stick to capital city Nur-sultan (known between 1998 and 2019 as Astana), a purpose-built, planned city that showcases the country's wealth, and former capital Almaty (Kazakhstan's largest city) known for its old-school European boulevard vibes. A long weekend in Almaty is the perfect blend of markets and museums during the day, a people-watching stroll down pedestrian streets in the late afternoon, and excellent food with a great craft beer in the evenings.

Of course, for most visitors to Kazakhstan, it's the outdoors that's the biggest draw. My first visit to the nearly 1,000ft (300m) deep Charyn Canyon left a lasting impression with its red sandstone cliff walls, as well as the formidable “Valley of Castles” hidden inside – both continue to inform my idea of Kazakhstan. But there are plenty of other memorable experiences, including hiking a 9,850ft (3,000m) peak for views across the Trans-Ili Alatau, spending the night in a yurt while the full moon shines through the uyk tent top, sliding down the singing sand dunes of Altyn-Emel National Park, or swimming in a string of mountain lakes at Kolsai.

This country also has extraordinary potential for winter adventure. As well as the international-standard ski resorts – particularly Shymbulak outside of Almaty – there is an almost endless opportunity for freeride (skiing on ungroomed terrain outside resort boundaries) and even heli-skiing on untouched powder in remote Tien Shan. Riding the cable car over the massive Medeu skating rink to the base of Shymbulak, 7,200ft (2,200m) above sea level, it’s easy to forget that this incredible mountain scenery is less than 15mi (25km) from Almaty.

Before you bring up Borat…

The mockumentary film Borat: Cultural Learnings of America for Make Benefit Glorious Nation of Kazakhstan is a big deal here – but probably not in the way you expect. After originally banning the film when it was released in 2006, the Kazakh Government made an about-face in 2012 and the country's foreign minister officially thanked the film’s writer and star, Sasha Baron Cohen, for boosting tourism to the country by as much as 1000%. Following the release of the sequel in 2020, the country used the worldwide attention on the film to launch a tourism campaign – Kazakhstan – Very Nice! – highlighting the film’s protagonist’s best-known phrase. Of course, the reality of Kazakhstan is far different from the film's depiction, and many Kazakhs protest what they see as a racist appropriation of local culture by Western media – so tread carefully if you attempt to discuss the movie while you’re there.

Getting around on public transportation

Kazakhstan is huge – nearly 1,865mi (3,000km) at its widest point – so it's worth thinking ahead about where you'd like to go and how you'd like to get there.

Shortening the longest trips, Kazakhstan's major cities are connected by air. Flag carrier Air Astana may be the most familiar to international travelers, though their low-cost carrier arm FlyArystan duplicates much of the route network at lower prices. Whether you pick from these two, the delightfully named SCAT, or Qazaq Air, you can fly in Kazakhstan with peace of mind – as of 2018 all of the country's airlines are cleared from the EU Safety List of banned/restricted airlines.

For medium- to long-distance journeys, Kazakhstan's rail network is a tempting choice. Nur-sultan, Almaty, and Kyzylorda are linked by European-built high-speed routes. Other routes are operated by the more-traditional platskart (3rd-class open-plan cars) and kupe (2nd-class four-person private couchettes) carriages found across the former USSR, and while they may not save much time over road travel they offer far more comfort.

On short- to medium- distance trips, intercity bus and marshrutka (minibus) services are generally the most common option. It's often a roll of the dice whether you'll land in a comfortable new vehicle or a rust bucket that seems to have been lumbering along the same route since Stalin left town. Typically, minibus services will depart more frequently and have a greater chance of a comfortable ride, while coach service tickets will be cheaper.

For everything else, there's the shared taxi. Particularly on trips to remote towns or infrequently served destinations, the only transport option is to pay for a seat in a private car that waits around outside of bus and train stations till it fills up. Though this may feel strange to Western visitors, it's a very normal aspect of life in Kazakhstan that will be an absolutely necessity if you want to explore the country deeply. Most share taxis are also willing to hire out as private taxis, if you either don't want to wait around for it to fill up or need to get somewhere not typically served by public routes. Be prepared to bargain, and try to get a local opinion on appropriate prices to your destination beforehand. How safe is Kazakhstan for travelers? From transport to scams, thieves and corrupt police, here's everything you need to know to have a safe trip. 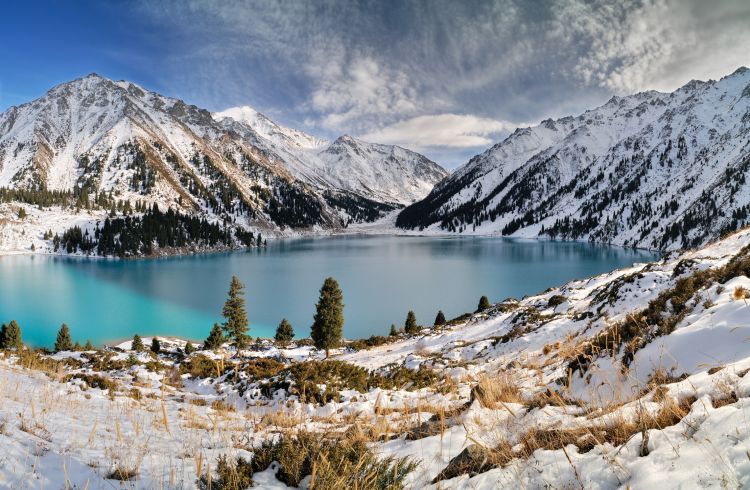 Travel Tips for Kazakhstan: How to Stay Healthy

Find out how to stay safe in wild weather extremes, avoid food poisoning and which vaccinations you need for your trip to Kazakhstan.