Though most known for its tragic past, today, Hiroshima is one of Japan’s most vibrant cities. With historic Torii Gates and adorable bunny-islands, our local insider, Suzanne shows us it’s time to rediscover this city.

If you’re in Hiroshima, you have to go to this UNESCO World Heritage site, aka the A-Bomb dome. It’s located along the Motoyasu River and quite near to Hiroshima Peace Park.

The fact that the shell of this iconic building still stands today symbolises the resilience of Hiroshima after the attack in 1945.

History gets pretty real in the park’s Peace Memorial Museum, with exhibits of burnt out school uniforms of kids who disappeared after the attack and photos of hibakusha (people who were exposed to the bomb’s radiation).

If this sounds like too much, there are many other monuments in the park to pay your respects, like the Children’s Peace Monument.

This island, also known as Miyajima, is home to the Itsukushima shrine and its famous Red Torii Gate. Both appear to float on the sea at high tide.

Be sure to try the momiji manju (maple leaf-shaped cakes) and fresh grilled oysters. Heads up: deer roam the streets freely and although they’re pretty tame, they WILL steal your food when you’re not looking!

The perfect times to visit this park on Itsukushima is during autumn, when the momiji (Japanese maple) trees turn brilliant red, or during spring, when the cherry blossoms are in full riot.

From the park, you can hike or take a cable to the top of Mount Misen for panoramic views of the Seto Inland Sea.

Although the original was destroyed during WWII, the renovated structure is pretty impressive. Inside, learn about Hiroshima’s history, try on samurai gear, or trek to the top of the castle for expansive views of the city.

Afterwards, trawl the grounds for the perfect picnic spot or feed the koi and turtles that live in the moats around the castle.

About 15 minutes’ walk from Hiroshima Station is Shukkeien Garden, a compact, Edo period landscape garden. Although smaller than other famous gardens in Japan, Shukkeien Garden is perfect if you want to escape the crowds for a while.

Stroll along the paths and contemplate the miniaturised landscapes of forests and mountains to find your Zen in the middle of the heaving city.

Does an entire island overrun with bunnies sound like heaven to you? To get your furry fix, head to Okunoshima, found off the mainland.

Although the rabbits were first brought here to test poison gas during WWII, today, they’re perfectly harmless. Stuff your pockets with carrots, take the ferry from Tadanoumi Port (2 hours from the city) and prepare to be mobbed!

Ninoshima is another island worth checking out. Accessible by ferry from Hiroshima Port, it’s home to Aki no Kofuji, the island’s own version of Mt. Fuji.

It’s definitely off the beaten path, having once been the site for quarantining Japanese soldiers and atomic bomb victims during WWII.

Cycle around the island’s peaceful trails and bring some snacks – there aren’t any restaurants here.

Want to find the best places to eat, things to see and outdoor activities?
Get our FREE Japan Survival Guide to find out how! 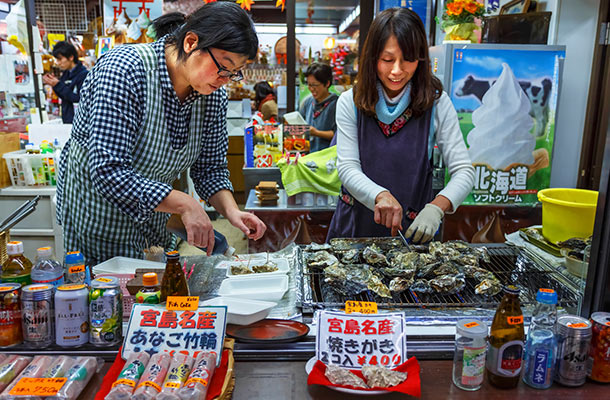 Known throughout Japan as a foodie destination, Hiroshima is especially famous for its seafood. Local insider, Isabella, take you on a tour of the city’s signature dishes. From sake bars and izakayas to craft beer nomihodais, Suzanne Bhagan shows you the best of this city's vibrant nightlife.