Though its Emilia-Romagna neighbors Bologna and Parma get all the culinary fame, and nearby Tuscany gets all the tourists, the medieval village of Brisighella offers gastronomic specialties of its own, along with plenty of history and charm.

The warped and irregular Via degli Asini – Donkey's Way – meanders out of view behind a colorful tapestry of leaning homes that pepper the main street of the medieval borgo (village) of Brisighella, Emilia-Romagna's unsung hero. In an Italian region celebrated worldwide for a laundry list of renowned delicacies (balsamic vinegar, lasagna, ragù, mortadella, Parmigiano Reggiano cheese, tortellini) and status-symbol sports cars (Ferrari, Lamborghini, Pagani, Maserati), it's admittedly hard to find fame up against such a rich and established pedigree.

This incredibly preserved passageway dating back to 1290 – it was originally the top of a fortification wall – sits elevated from current street level out of sight, out of mind, hobbling along on a slight curve framed by semi-circle archways on one side, a low-slung, wood-beamed ceiling above and ancient homes on the other. It's at once both one of the most interesting and photogenic sights in all of Emilia-Romagna and one of its most under-the-radar. That's Brisighella: a discovery seven centuries in the making.

When Via degli Asini was built, Brisighella was a one-donkey town so to speak, with animals occupying first-floor stables above what was at the time the village's only street. Carts were stored at ground level while two floors of living space topped the stables. Above town, a fortified castle was constructed in 1310 by the Manfredi family (Lords of Faenza), which, together with the clock tower erected on square blocks of gypsum 20 years earlier, formed the defensive system of the village. On another nearby hilltop, the Santuario del Monticino, flanked by cypress trees, dates to the early 1600s. Together, this trifecta of Middle Age marvels looms over the red-hued rooftops of Brisighella, forming one of the most postcard-worthy scenes in all of Italy – yet most folks have never even heard of this quaint little Romagna town.

Brisighella straddles the slopes of the Tuscan-Romagna Apennines in the beautiful Lamone Valley just nine miles (14km) northeast of the Tuscan border; in other words, the landscape is already transitioning into what is undoubtedly Italy's most celebrated region: the vineyard-strewn landscapes, castle-topped hillsides, and magical medieval villages of Tuscany. It would be remiss not to mention you can find less touristy versions of these things outside of Tuscany as well – in Umbria, Piemonte, Abruzzo, and here in Emilia-Romagna, among others. On a clear day, you can see Tuscany from the borgo’s 646ft (197m) clock tower, but the hordes of tourists don’t register from this distance. Brisighella remains undiscovered, and unaltered by the downsides of overtourism. It's the reason that I am here – along with an Irish couple I meet who have come four times a year, every year, for a decade – along with the artichokes, of course.

Every May, Brisighella finds itself delightfully inundated with a rustic mini-artichoke that grows nowhere else: Carciofo Moretto (Moretto artichoke). Supply is limited – there are only a dozen or so farmers in town that cultivate these coveted culinary gems, one of which is 65-year-old Silvano Neri, who oversees about three hectares on a gently sloping hillside a few miles outside town.

Neri picks about 1,000 artichokes an hour. The job is on-demand only – local restaurants and supermarkets don't mess about with anything but extreme freshness – which he then turns around and sells to the local cooperative for €0.30 each. As he demonstrates his technique plying the field and explaining his unique counting system, I do the math.

I'm no numbers whiz, but that comes to €300 per hour, an extraordinary amount of money by Italian standards – nearly 12 times Italy's average salary. The work – backdropped by the idyllic storybook landscapes of our collective Italian dreams – is easy and efficient. "Moretti are the least work and the biggest payoff," he says with a wry smile, proudly dressed head to toe in his green and yellow canvas jumpsuit provided by Consorzio Agrario di Ravenna. “I make €18,000 in May alone!" The rest of the year, Neri farms strawberries, cauliflower, peas, and onions, but none of those are as special as Brisighella's Moretti.

The origins of Moretti are unclear, but they started appearing after WWII, though nobody paid them much mind. Folks picked them for personal consumption and not much else. About 10 years ago, with the help of the cooperative, Neri and a few others began to commercialize the product, recognizing the hard local clay and gypsum-rich soil that is credited for the unique environment that spawned Moretti. Each May, every restaurant in town features special off-menu dishes showcasing this slightly sweet artichoke variety: sliced raw with olive oil, lemon, and shaved Parmigiano Reggiano, in crunchy lasagna with guanciale (Framboise), showered in strichetti (butterfly pasta) with guanciale (La Grotta), and so on. It's a gastronomic marvel totally distinct from the region's usual suspects.

The other product unmistakably omnipresent around Brisighella is its remarkable extra virgin olive oil, produced in limited quantities and hard to come by in other regions of Italy. C.A.B (Cooperativa Agricola Brisighellese), a local cooperative born in 1962 to help organize and promote the area's wine and olive oil, was instrumental in obtaining DOP (Denominazione di Origine Protetta) status for the town's olive oil in 1996 – one of the first Italian olive oils to achieve the European Union's most important local product protection status.

As with Moretti artichokes, Brisghella's famed olive oil owes a major debt to the unique soil. Like a rechargeable battery, the high concentration of gypsum in the area creates a microclimate – it stores heat from the summer and releases it throughout winter, allowing olive trees to flourish despite its northern geographic location nowhere near a lake or a sea (most olive oil is produced farther south and/or near bodies of water).

The olive oil production facilities of C.A.B just outside town fire up between October and December when olives are harvested. Other times of the year, it operates a must-stop shop for local products (marketed under the label Terri di Brisighella) both here and in a smaller shop in town. I've come not only for a tasting of the famed olive oil, but for C.A.B's version of carciofo moretto sott’olio (Moretti artichokes in oil). This tasty treat marries Brisighella's two culinary coups, which share a common aromatic base, along with wine vinegar, salt, and pepper.

Of course they did.

How to get there

Brisighella is in the Lamone Valley about 7.5mi (12km) southwest of Faenza, which sits along the Via Emilia, a 2,000-year-old ancient Roman road that connects Piacenza to Rimini. It's a little over an hour's drive from either of Emilia-Romagna's major airports in Bologna and Rimini.

In May, when Moretti artichokes are highlighted in all of the town's trattorias. Brisighella's artichoke festival, Sagra del Carciofo Moretto, is usually held mid-May.

Brisighella is home to a small handful of hotels, guesthouses and B&Bs. Agriturismi (farm accommodations) pepper the surrounding hillsides around town. While crowds flock to Florence, they overlook this gem of a town in the southern Italian region of Puglia. Nomad Paola takes us on a walking tour of its graceful piazzas and stunning architecture. 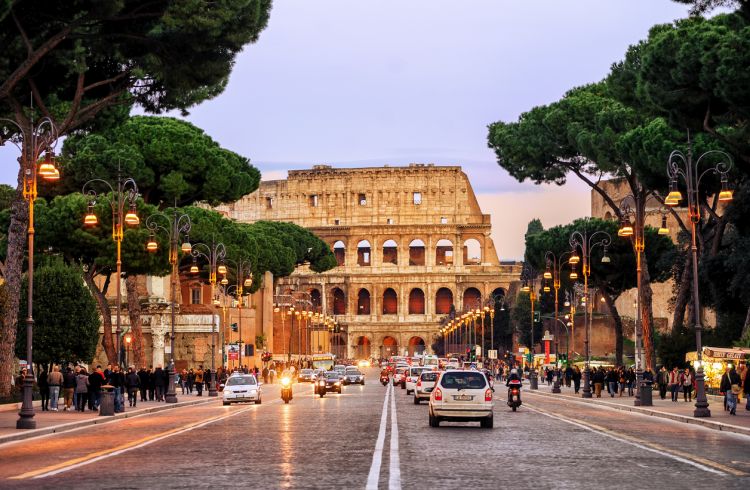