A highly saline lake in western Jordan famous for its healing properties, the Dead Sea is fascinating – and slowly disappearing. Here’s why you should visit (and why you shouldn't wait too long).

Partially located in the Hashemite Kingdom of Jordan, the Dead Sea is a strangely beautiful natural wonder. The salty sea, renowned for its buoyancy and healing properties, has enticed pilgrims for thousands of years. Yet the sea that heals is slowly dying.

Sunlight sparkled on the salt-encrusted rocks fringing the cobalt-blue water, but I knew no life lived beneath the surface. The Dead Sea – actually, a lake – is a body of water three million years old, bordered by Israel, Jordan, and the Palestinian West Bank. In the arid landscape of the Middle East where water means life, it shines like a sapphire oasis of hope. But nothing exists in water nine times saltier than most oceans. The Dead Sea is the deadest sea of all.

Although it lies less than an hour’s drive from Jordan’s capital, Amman, the Dead Sea is often overlooked by tourists heading straight for the country’s archaeological marvel of Petra. But a dip in the waters of the Dead Sea is one of those bizarre and uniquely memorable experiences that can only be fully appreciated in the doing.

Stepping into the water is like stepping into a tepid, oily bath. The high salinity equates to a high mineral content which, for some reason, feels greasy. But I didn’t find it unpleasant. My skin tingled and smarted from little cuts and scratches I didn’t know I had, and then the most extraordinary sensation – I couldn’t put my foot down on the seabed. A salt concentration of 34% makes the water so dense that a body becomes extra buoyant. The sudden weightlessness swept me off my feet to bob gently on the surface like a cork in a bucket.

Gleefully, I lay on my back and slowly rolled across the surface, sat in the water as though lounging in an armchair, tried to sink only to immediately pop up and float. My child-like wonder was reflected in the faces of the other “floaters” reclining on the surface. I laughed as a Jordanian boy and his sister splashed and howled in unison. Salty water. Eyeballs. Their play-fight didn’t last long.

I left the lake only to rinse, dry, and slather on a layer of dark, rich mud from a spot that had been pointed out to me by the locals. The healing properties of Dead Sea mud has been extolled since ancient days. The minerals soothe and heal skin conditions such as psoriasis, acne, and eczema as well as respiratory conditions, arthritis, rheumatism, and muscle aches. Cleopatra was an avid fan, as was King Herod. Egyptians even used the mud in their mummification process.

Back in the lake, the briny water on my mud-caked body felt more silky than slimy. I reclined full-length on my bed of water, soaking up centuries – or rather, millennia – of history. The Dead Sea’s salty history dates back to biblical times, to Abraham and the destroyed cities of Sodom and Gomorrah. Jesus Christ was reputedly baptized in nearby Bethany-on-the-Jordan. And in a cave on its north-western shores the famous Dead Sea Scrolls were found.

At 1,412 ft (430m) below sea level, the Dead Sea is the lowest spot on Earth and has the highest recorded barometric pressure on earth. The air is much richer in oxygen than it is at sea level. Combine warm sunny days, serene water, healing minerals, and purified air, and it’s no wonder modern-day pilgrims flock here to feel rejuvenated. But the sad fact is, the Dead Sea is dying. It is shrinking at a rate of three feet per year and has lost one-third of its surface area in the past few decades.

For tens of thousands of years, the Dead Sea maintained a dynamic equilibrium – water flowing in from the Jordan River and the Sea of Galilee balanced water lost through evaporation. But a growing regional population combined with farming, damming, and industrial-scale mineral extraction has reduced the water flow from the Jordan River to a trickle. Add in climate change and global warming and the balance has shifted. The landscape has as well.

As the lake waters recede, large underground salt deposits under the surface of the shoreline dissolve when freshwater seeps into them, causing the ground above to collapse into huge, crater-like chasms. In recent years, 6,000 sinkholes have formed around the lake, mainly on the northwest coast. Some experts believe the Dead Sea will be dry by 2050. Others believe it will reach a new state of equilibrium before then – a smaller version of the one I bathed in.

I didn’t know the Dead Sea was dying. I bobbed and floated in the natural spa waters, ignorant at that time of sinkholes and environmental catastrophes. After 15 minutes (in water this salty, you can definitely have too much of a good thing) I rinsed off under the beach showers, surprised at how soft and smooth my skin felt. The Dead Sea might not be the fountain of youth some claim it to be, but magic lives in the salty sea.

Flights connect Amman’s Queen Alia International Airport with all major European cities. Tourist minibuses operate from Amman to the Dead Sea or you can hire a taxi for the day. To see more of Jordan, hiring a car is the best option.

Accommodation varies from luxury Dead Sea resorts (with private beaches and sumptuous spa packages) to budget choices. Day-trippers can pay to use hotel facilities or Amman Beach (US $35/JD 25), a public beach decked out with pools, showers, and dressing rooms, which is where I went.

Jordan can be visited any time of year, but the summer months (July-August) are hot. October to April offers the best climate but even winters are balmy enough for a dip. Due to the Dead Sea’s high salinity, don’t wear your best swimsuit into the water. It’s fine to wear a bikini at the beach but, as Jordan is a Muslim country, dress conservatively elsewhere. Joining a woman-led group tour, or one that incorporates many local women’s voices, is the best way to experience the history and culture through their eyes. 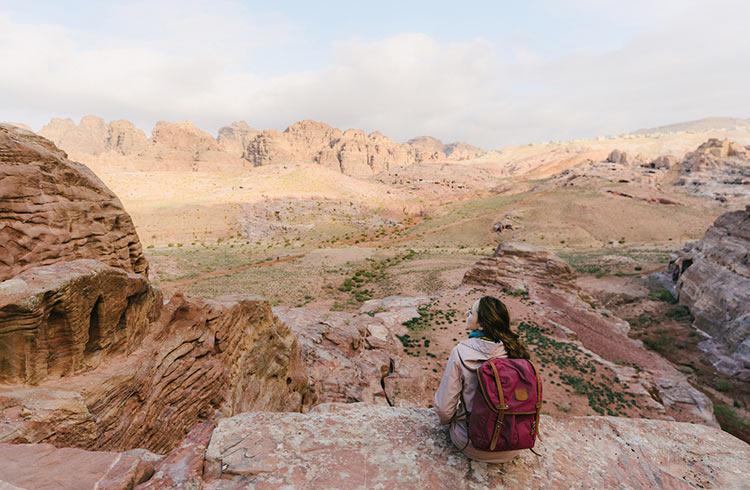 20 Ways to Be a Better Traveler

Small changes can make a big difference to the people and places you encounter on your travels. Adopt these ethical and sustainable habits, and you can proudly call yourself a responsible traveler.