5 Experiences to Get Off the Beaten Path in Turkey

Note: most of the travel described in this article took place before the coronavirus pandemic. Learn about travel restrictions in Turkey due to COVID-19.

As any seasoned traveler will tell you, the most memorable travel moments take place when you veer off the well-trod tourist trail. This seems especially true in Turkey, where layers of history seem to effortlessly coexist and “off the beaten path” is often just a few steps away – or even right in front of you, if you know where to look. Here are a few of my favorite experiences around the country.

Most Istanbul visitors head to the Grand Bazaar to shop when they’re in the Old Town. But only a few make it to Tahtakale, the warren of narrow streets behind the Spice Bazaar, where every street has something different on offer.

I’m a die-hard DIYer, and Tahtakale is where I hunt for my supplies: Wavy, Rapunzelesque hanks of raffia for a crochet basket. Fine wire mesh to form the bones of a papier-mache dragon sculpture. Plastic, cafeteria-style trays to lay out the magazine cut-outs I use for collages.

Wandering past stores selling mop heads, plastic bins, and cheap light fixtures, you might not guess how much history is all around you. Many shops are actually in refurbished hans – the Turkish precursor to the shopping mall – like the recently restored Beta Yeni Han, where you can buy coffee, tea, dried fruit, and collectibles. Rüstem Paşa Mosque is as memorable for the patchwork of cobalt and turquoise outside as it is for its serene interior. And I always find myself entranced by the rich, earthy smell of roasting coffee wafting through Tahtakale from Kurukahveci Mehmet Efendi, a coffee roastery that has operated as a family business since 1871. It’s easy to lose yourself in Tahtakale – literally and figuratively – and I highly recommend that you do.

Burgazada is one of the smaller Princes’ Islands, an archipelago that lies about an hour outside Istanbul by ferry. Like many tourists and locals, I’d been to nearby Büyükada and done the obligatory horse-drawn carriage ride. But until a friend suggested a weekend trip to Burgazada this summer, this island wasn’t really even on my radar.

I’m so glad she did. There is blissfully little to do on Burgazada, so even in the height of summer, it is calm – and socially distanced. There is one boutique, some convenience stores, one tiny hipster cafe, and a handful of restaurants serving meze, small plates like sea bass in mustard sauce, broad beans in savory sauce, and briny samphire (a personal favorite).

You can take in the stunning panorama of Istanbul’s Asian side while strolling along the coast road that stretches around most of the island. Or take an electric minibus to access the interior of the island more quickly. The Greek Orthodox church of St. John the Baptist is the island’s most visible landmark. Its history stretches back to the Byzantine era, and its domed design reflects that Greco-Roman heritage.

Personally, I head straight for the beach. Burgazada stretches steeply up from sea level and, with the island at your back, even popular spots feel as enclosed as private swimming holes. I love a rugged coastline, and Burgazada’s beaches, with their craggy rock formations and pebbly shorelines peppered with sea glass, do not disappoint.

The former Greek island of Gökçeada

Burgazada is not the only island known for its Greek heritage. Homer name-dropped Gökçeada, known then as Imbros, in his epic tales. Formerly part of Greece, the Treaty of Lausanne ceded the ruggedly beautiful island, situated about 9mi (15km) from the Gallipoli peninsula, to Turkey at the end of World War I. This kicked off a “population exchange” between Turkey and Greece that displaced more than 1.5 million people. Göçkeada was not part of the 1923 exchange; however, in the 1960s, Greek inhabitants were forced to leave and abandon their properties, modern ruins that are still visible today.

Glimmers of Greek culture linger on Gökçeada – businesses like the Baba Yorga winery and restaurants serving Greek cuisine. Occasionally, you’ll hear an elder speaking in Greek. The island is becoming popular as a summer destination for Greek visitors, as it lies just two hours away from the country by ferry, and there are a few boutique hotels and cafes sprinkled around the hilly terrain. Take time to visit the small market where you can buy aromatic mint and dried thyme, fruit molasses, and handmade olive oil soap, as well as the family-run apiary that sells honey from lavender-fed bees.

In our first years in Turkey, expat friends – who usually had never actually been to Ankara – recommended we avoid Ankara because “there’s nothing there.” When we finally took a weekend trip there (it’s a comfortable four-hour train ride from Istanbul) we were pleasantly surprised at how much the city had to offer.

The capital is replete with Brutalist architecture, a mid-century international style typified by clean lines and raw materials. The Middle East Technical University, designed by architect Behruz Çinici, who was inspired by regional Turkish structures like Anatolian flat-roofed homes, is particularly noteworthy.

Hamamönü, a charmingly restored 19th-century Ottoman village now filled with restaurants and sidewalk cafes, is the perfect counterpoint to all this architectural austerity. Walking around Anıtkabir, the dramatic and imposing mausoleum complex where modern Turkey’s founder, Atatürk, is buried, taught me more about Turkish national identity than any history book I’ve read.

Ankara delivers on ancient history, too. The Ankara Castle is a hilltop fortress dating back to the 8th century B.C. that offers a 360-degree panorama of the city. There are also the ruins of a Roman bath complex and temple. Finally, in a country filled with great museums, Ankara has my favorite. The Museum of Anatolian Civilization is home to the mother goddess figurine discovered at the seminal Çatalhöyük archaeological site, as well as massive stone slabs featuring Anatolian hieroglyphics.

Southeast of Ankara, Gaziantep and Şanlıurfa offer even more opportunities to delve deep into Turkey’s ancient past. To see how the ancient Romans – who settled into the area circa 60 B.C. – once lived, head to the expansive Zeugma Mosaic Museum in Gaziantep, which houses exquisite mosaics depicting scenes of daily life. The Gaziantep Museum of Archaeology features tools and objects from as far back in human history as the Bronze Age. For more modern metalwork, head to Gaziantep’s Coppersmith’s Bazaar, where master craftspeople make and ply their wares. No trip to Gaziantep would be complete without sampling two local delicacies: the regional version of baklava, and its culinary cousin, katmer, ground pistachios layered into tissue-thin layers of crackly pastry.

From Gaziantep, head by car or bus to Şanlıurfa. The picturesque two-hour drive will lead you across the Euphrates River, said to border the Garden of Eden. The area was also allegedly the birthplace of Abraham, a prophetic figure in Judaism, Islam, and Christianity. You can pay your homage at the Balıklıgöl, a lake that, according to legend, formed spontaneously when King Nemrut attempted to burn Abraham alive. The fire turned to water, and the wood into the sacred carp that still live in the lake today.

Şanlıurfa’s main draw, Göbekli Tepe, predates all of this by millennia, providing evidence of human activity as early as the 10th century B.C. Göbekli Tepe may be the world’s first temple, making it one of the most significant archeological discoveries of all time. A center of worship amidst rolling meadows, the small excavation features otherworldly stone megaliths – some up to 18ft (5.5m) tall and weighing in around 16 tons (14,500kg) – painstakingly carved with scorpions, animals, and birds.

I was awed by the site, but I found myself completely immersed in the very 21st-century exhibition at the small, on-site museum. I think it’s technically for kids, but I was so entranced by the projected images of ancient human activity and swirling night skies – all set to crescendoing drum music – that I went through it three times. Göbekli Tepe is certainly off the beaten path, but it is well worth the effort of getting there. 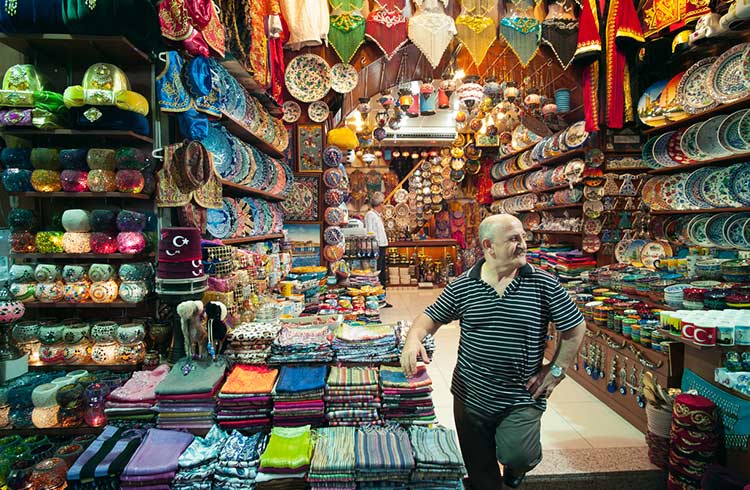 Transport in Turkey: Tips on Getting Around

Is it safe to drive in Turkey? What are the roads like? Find out how to drive safely on Turkey's roads with these tips.

Visiting Istanbul during Ramadan, Amanda Jurden comes to understand the meaning behind the ritual of fasting.