It's still dawn as I shoulder my pack and make my way down a rickety wooden jetty on Egenolf Lake, in northern Manitoba, to the vintage De Havilland floatplane bush pilot Colin Knight is readying. Across the water, a thin band of yellow light rises behind spruce trees, the sky milky white in a land where the sun never sets for long in summer.

From the air, it's apparent why Manitoba is the known as the “Lake Province” – swirls of indigo sprawl towards the horizon straddled by islands of boreal forest. There are 110,000 lakes in this province alone, almost 16 per cent of its total surface area. It's one reason fishing enthusiasts are drawn here from around the world, and at Blackfish Lake I clamber aboard a 16ft (5m) aluminum craft to have a crack myself.

My guide is Napoleon Denechezhe (aka Nap) an affable, if somewhat taciturn character charged with the thankless task of teaching me how to fish. Bobbing silently amid calm waters, the vast swaths of pristine wilderness are ours alone.

Commercial fishing is forbidden here and consequently the waters are teeming with northern pike, walleye, and lake trout. Despite my ham-fisted attempts, it doesn't take long to reel in several pike, my rod nipping and bending as I crank the reel, Denechezhe bemused by my flustered approach.

The pike is fried in boiling oil alongside chopped potatoes, onions, beans, and sweet corn. Taking a seat on the sand, we watch in silence as a pair of bald eagles nest on the opposite shore.

Back at our home base, the rustic yet charming Gangler’s North Seal River Wilderness Lodge, owner Ken Gangler is holding court over drinks.

This isn’t a place with rigid itineraries, more choose-your-own-adventure. Some days I kayak the lake or take a fat bike for a burn, sitting by the fire pit afterwards with a beer, awaiting the northern lights. Other times, we set out to explore as a group led by Kotak, Tronrud, and local First Nations guides.

This stretch of Manitoba is famed for its eskers: sand and gravel ridges left behind when the glaciers retreated 8,000 years ago. There are 13 in the immediate vicinity, some rising to 230ft (70m) and higher. The longest is the Robertson Esker, spanning 985ft (300m).

We make a beeline for it on a blustery afternoon, our motorized boats thudding over the choppy lake surface, spumes of salty spray whipping in off white caps as we pick up speed.

After hiking to the ridge line, we can see for miles in all directions, forest and lakes sprawling interchangeably towards the horizon.

"We're probably the first non-indigenous people to set foot on this esker in about 2,000 years," says Kotak.

The switch to adventure travel in this region is still recent – previously, it mostly attracted avid fishing types. So aside from the locals who live and work nearby, we may well have been the first to hike the esker in a long, long time.

Beside a set of freshly shed caribou antlers, we find a spearhead fashioned from quartz. It was likely created by hunters all those millennia ago and would have been tied to a stick and thrown at animals close-range.

Flying north to the Nunavat border

On my final day, we board the floatplanes again for a 86mi (140km) flight north to the Nunavut border. Inside a dilapidated caribou-hunting cabin is the remnant destruction of a curious bear; claw marks gouged across the ceiling and cupboard doors.

The place looks like it hasn't been used in years (the nearest road is more than 310mi/500km away) but with the floatplanes connecting the site to the main lodge, Gangler plans to refurbish the cabins, and add a fleet of kayaks, and obvious safety precautions against encroaching critters.

In forthcoming seasons, visitors here will more likely be shooting caribou, wolves, and bears with DSLRs than rifles.

Gliding back onto the surface of Egenolf Lake, the region feels more like home. There's been a definite shift in my daily rhythms, fewer furtive glances at my watch, less preoccupation with life's trivialities.

The northern lights are slower than usual to make their appearance on our final night. Determined for one last glimpse – they've shown up every night of my trip – I find myself alone by the fire at 2am. It's quiet; only the sporadic pop of a burning log or the low murmur of wind out across the lake. Above the treetops, a raging swirl of emerald green dances in the night sky.

I think of the closing lines to Robert William Service's poem, Call of the Wild.

"There's a whisper on the night-wind, there's a star agleam to guide us, And the Wild is calling, calling ... let us go."

Air Canada offers direct flights to Toronto, Montreal, and Vancouver from a number of international destinations, with ongoing connections to Winnipeg. (Note: due to COVID-19 safety requirements, international travelers may be restricted from traveling to Canada. Learn more here.) Several carriers, including Air Canada, offer direct service to Winnipeg from the United States. It's a 2½-hour charter flight from Winnipeg to Gangler’s Lodge, which is open June through September. Late August and September are among the best times for northern lights viewing. 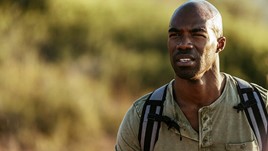