In a confined space, even British and Canadian reserve melts away.

“See that guy?” Fariza pointed at a stocky, mustached man. “I think he’s following me.”

I was taken aback. It’s hard to “follow” someone on a train. Especially a train barrelling across 2,485 miles (4,000 km) of Canadian wilderness with only a handful of stops along the way.

“He asked to borrow my phone. Afterwards, I checked the outgoing calls and he’d called my ex.” Fariza fidgeted with her hair; her anxiety was real. “He said it was an accident, but I think my ex sent him.”

I recognized the man. We’d spoken on the platform in Vancouver. He’d smelled powerfully of alcohol and looked like he’d lived hard and been ill-used. Shamefully, I’d distanced myself from him before we boarded, not wanting to spend four days of rolling confinement listening to his boozy jokes.

Now he was just one of the few dozen carriage-mates making our way across the country. Each of us was traveling for different reasons. Gerald, a friendly octogenarian, was visiting his children in Edmonton. A young Chinese girl, whose name I forget, was heading east for college. I was going to Toronto to meet a flight to Boston, and from there back to the UK. After months working for bed and board in North America, it was time to go home. Fariza, it transpired, wasn’t traveling but escaping. She’d hinted at an abusive relationship, but didn’t elaborate. Her fear of the suspected follower was authentic enough to fill in the blanks.

The train left Vancouver on January 5th. We’d arrive in Toronto on the morning of the 10th. It was an epic trip, and a luxurious one if you were lucky enough to afford a sleeper cabin. Waking up each morning to a new frame of Canada’s segmented landscape, three meals a day in the dining car: it was a glamorous traversal of the country.

For us, a more prosaic experience. In the single Economy carriage, there were no beds. Each of us colonized a pair of seats. The onboard food prices were prohibitive, so at every infrequent stop we would dive out into the screaming cold in search of a store or vending machine. No one in our carriage had enough money to travel in comfort. We were bonded by our minimal means.

No one from the rest of the train was allowed into the Dome. It was our reward for enduring days of discomfort, and it was where we built a transitory community.

We had the Dome Car, though – a second tier of seating sitting atop our humble carriage, it was constructed almost entirely of glass and gave unbeatable views. The Rocky Mountains cascaded down to the immense prairies, which gave way to the forests of Ontario, and we had a front-row seat for it all. No one from the rest of the train was allowed into the Dome. It was our reward for enduring days of discomfort, and it was where we built a transitory community. We shared food, books, telephone batteries, and stories.

All except the mustached man. He stayed downstairs, drinking alone. Fariza remained worried but we disregarded him. In the pre-dawn of the third morning, however, we were wakened by his screaming at a young family and their crying baby. His anger was disproportionate and frightening in such claustrophobic space.

He was forced to leave the train. At a tiny station in the middle of nowhere, he picked up his duffel and stepped off into the whiteness. He watched us watching him as we pulled away. Fariza claimed he winked at her, but I didn’t see that.

The next morning, we disembarked at Toronto’s Union Station, into a battleship-colored day. We stood in a huddle, newly awkward in the real world. A few goodbyes, and we dissolved from a group into individuals again. The Dome Car gang was over. I watched Fariza walk away. She stole little glances at every man who passed her. I hope wherever she went, she found some peace.

Neil is an ex-academic who specializes in Gothic Literature. He ditched a particularly bad job to try his hand at living precariously for a year, roaming around the US and Canada.

Going Back to Tuktoyaktuk

Traveling a remote ribbon of Canadian highway to the edge of the continent, Carol Patterson returns to where the biggest chapter of her life began.

Come with us as we travel to the remote wilderness of Canada on an Inuit-lead adventure.

Falling in Love With Indonesian Buses

Traveling overland can open the door to aspects of a country you might otherwise never see. 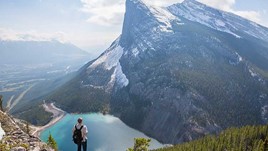 An Adventurer’s Guide to Exploring the Canadian Rockies

Our pick of the best hiking trails, mountain biking tracks, and outdoor adventures in the Canadian Rockies. So, what'll it be – Banff, Yoho, Kootenay, or Jasper National Park?