Along the coast of Santa Catarina, dolphins and humans cooperate to bring in the catch.

Since 2011, I’ve been traveling the world by bicycle, and Brazil is the country that I’ve gotten to know the most deeply. I have always liked the sea, surfing, and scuba diving. That’s why, in addition to the interior, I based part of my route on the coast. One of Brazil’s best-known and most beautiful coastal regions is the state of Santa Catarina. While in the neighboring states, I heard talk of the peculiar event that occurs in a town called Laguna, where the dolphins help the humans fish in a unique type of cooperation. At first, I was a bit skeptical, so I decided to go and see it with my own eyes, and if it was real, I would make a little documentary and show the world that wonder.

One of the things that struck me the most was that this happened every day – it’s not something strange or very difficult to see. Anyone who visits Laguna can watch the dolphins corner the schools of fish along the shore, near where the fishermen are. The fish can’t escape, and both the dolphins and humans win with this strategy. The fisherman have given all the dolphins names, and can identify them without trouble by their markings, or even by their breathing at night.

This amazing display, combined with the cheerful character of the Brazilian people, creates an experience that’s difficult to forget.


Mostly in Portuguese. To view video captions, hover over the video and click on CC.
Albert Sans: Traveling the world by bicycle, you see amazing things but cycling the coast of Brazil, you don't expect to find this unique interaction between men and dolphins.

Willson Francisco Dos Santos: I've been fishing here for a long time, my father also fished here with the dolphins. I calculate that we probably have more than 100 years of fishing and interacting with the dolphins here.

Jeison Rodrigues: They take the example from their mother, the mother works and the calf accompany her they start to learn the same method. The same kind of jump, there are dolphins that like to leave the bank more in front, others like to leave in the middle, when they return, when they jump, others more towards the back. Everything depends on the mother dolphin, the calf gets used to her mother.

Albert Sans: The shoal of fish get trapped between the fishermen's nets and the dolphins. This way, both benefit.

Willson Francisco Dos Santos: When they come with fish, the way they dive, the way they swim, is different ... The dorsal fin... the dolphin arrives there and looks at the fish and gives a shake like they are saying: 'Wow, I'm looking at something here.'

Jeison Rodrigues: They know that near the shore, if they jump, they will not eat and neither will it bring fish to the fisherman... when the fish reaches the sand, near us, then the dolphin takes that leap. He jumps and turns around and then we throw our nets and the dolphins also eat.

Willson Francisco Dos Santos: They are our collaborators, because apart from eating their fish, they also bring them to the shore. If there were no dolphins here in the channel, going up and down, chasing the fish it would be difficult to fish here.

Jeison Rodrigues: Now there's going to be a big fish network out there he was here on top, then Scooby turned over.

Willson Francisco Dos Santos: A dolphin can arrive and you can ask someone 'What dolphin is that one?' and he is going to tell you that is such that one from there is 'Porquinho'.
Porquinho with his calf, a female
So, today we have: Scooby - Scooby, Caroba
- Caroba.
- Figueredo.
- Figueredo.
- Batman, Robin.
- There's the Botinha do Rio.
There's the Porquinho.
You have Pirulito, too.
Araranguá.

Jeison Rodrigues: When they told us that Electronico died, everybody was sad. He lived with us directly, we used to see him everyday when we came fishing;he was truly a partner.

Willson Francisco Dos Santos: They already have some spots where they stop exclusively for fishing. A ponta do guía that is over there, far away. You also have "The river". A ponta das pedras that is the small town where the dolphins stop because they know there are fishermen and they are going to get a lot of fish, too.

Jeison Rodrigues: Caroba likes to jump on the dock there, where there are fishermen on the rocks. They spend the whole day there, the whole night, there are people who sleep, who have a tent and spend all winter there.

Willson Francisco Dos Santos: Normally, the people who fish here are the same people that came here as kids with their parents.

Fishermen: I learned fishing with dolphins with my father, with my friends. My sport, my hobby, is fishing, if you invite me to go fishing, I would smile from ear to ear. When we have some needs, we come here to fish and get something to sell it is a way to make money too, a way to manage it. I fish a little, I earn a little money to help at home.

Jeison Rodrigues: People come to Laguna to experience the art of fishing with dolphins you will see a lot of tainha (kind of fish) It is the most beautiful thing in the world. Come on!!

Albert is a songwriter and filmmaker who has been traveling the world by bicycle since 2011.

On the Uruguayan coast, local fisherman Robert shares his passion for his work, and offers a lesson in sustainability. There are plenty of adventure destinations in Brazil beyond the Amazon and Iguazu Falls. Find out how to experience Brazil's wild destinations safely. 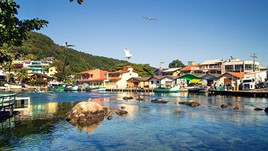