I lived with nomadic herders throughout Mongolia as I carried out a Fulbright-mtvU research project documenting their traditional music. Staying with families for days and weeks at a time, I would often participate in aspects of their daily lives. During one 10-day stay, I was lucky to witness my host family carrying out a yearly hair-cutting ritual for their herd of around 50 horses.

“Gadaa aduu dellej baina (They’re cutting the horses’ hair outside).” With her hands-turned-scissors gesture filling in the words I didn’t know, it was surprisingly easy to understand what my host-mother Enkhchimeg was saying.

I grabbed my camera and stepped out into the furious bluster that characterizes Mongolian spring. Herders and horses kicked up dust and dirt, which the wind caught and threw into eyes, ears, and mouths.

Mongolian horses have been aptly described to me as “half-wild.” Despite their small stature compared to their Western counterparts, lifetimes of grazing, playing, and running free with the herd have left their spirits uninhibited and whole – gruff in both texture and personality.

My host family coaxed the swirling herd down from the nearby mountains and into the corral to begin the yearly cutting ritual.

Cutting the manes and tails of an entire herd of horses is grueling work. My host family enlisted a few friends and relatives to help out – they would return the favor by pitching in with their friends’ herds in the following days.

Deep in this whirlwind of hair and grit, I was left in awe by these half-wild animals and the four men wrangling them. I felt my own senses heighten as I attempted to capture the power and beauty surrounding me.

With some of young horses, Ganbold decided to forgo his lasso and simply use his hands. Grabbing a front leg, he would tip the horse off balance before wrestling it to the ground. I got a laugh when I nicknamed him Aduunii Bukh – The Horse Wrestler.

While the horses he chose to grapple with weren’t fully grown, their wild power was clearly visible, and Ganbold’s innate strength was apparent.

Once a horse was controlled, the herders would tie three of its legs together. I watched as Bondon cocked a young horse’s head back, inserting a screwdriver into its mouth. Before I could process what was happening, he had removed a small tooth.

Later, I was told that certain teeth tend to cause pain when the horse is bridled, which can discourage the horse from eating. In the United States, these teeth are called “wolf teeth,” and are also removed.

In between roping, wrestling, and hair cutting, the herders took short breaks to hand-roll cigarettes and pour themselves milk tea.

After a few hours, two small sacks of horsehair lay on the far edge of the corral – Togoo estimated 22 lbs (10kg) worth. Selling for around 5,000 Tugrik per kilo, this annual ritual brought in around $25 USD. Enkhchimeg wasn’t sure what the hair would be used for, but knew that some was eventually sold outside of Mongolia. It’s likely that some would be used for making morin khuur, a traditional Mongolian instrument that uses horsehair for strings and in its bow.

Heading back to my host family’s white felt ger for noodles and tea, I told them how impressed I was with the difficult job that had just been completed. My host-mother replied, “It’s not difficult. There’s a corral. If there wasn’t a corral, it would be difficult.”


Hear more from this photographer on the World Nomads Travel Podcast, along with Mongolia's best treks, the art of throat singing, and why travelers describe Mongolia as one big campground.

Dimitri Staszewski is an award-winning documentary photographer and filmmaker whose work engages with often overlooked communities. Listen to Episode 17 of The World Nomads Podcast. Why travelers describe Mongolia as one big camp ground, the cause of pollution in Ulaanbaatar and the art of throat singing. 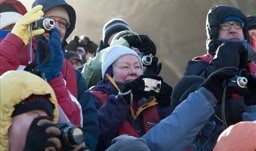