In the wilds of Ethiopia, a moment of solitude turns into the surprise of a lifetime.

Rural Ethiopia was almost exactly as I’d imagined. Coarse plains heaved in the wind, and kudus grazed beneath a rocky skyline. In my fantasies, however, I was never lying in the aisle of a bus, clutching a tin bucket as if it were the ledge of a cliff.

We were on our way from Addis Ababa to Harar, and I was limp with what I presumed was dengue fever. Self-diagnosed diseases are the worst kind. Hot metal rattled beneath me, chains of nausea tightened around my chest, and I heard someone say, “Ooh, a zebra!” in between my fainting spells. For matters beyond the pale of the bucket, I had to ask the driver to stop the bus by ringing a small bell. In these cases, my friends vowed to look away, as the spare brush didn’t offer much by way of privacy.

After countless such indignities, we reached the Harari border, which was guarded by a small security kiosk, a traffic barrier, and two armed guards. Since there was no visible road, and miles of wilderness on either side, this border check seemed to operate on the honor system.

Our driver presented his I.D. and asked the guards in Amharic if they had a bathroom I could use. They pointed their rifles into the distance, where I could loosely discern the shape of an outhouse. Humbled with gratitude, I began the long, lonely walk in its direction.

The facilities were comprised of three sheets of corrugated tin and a wood panel roof assembled around a hole in the ground. The flies were deafening. But with solitude and a wall to lean against, I had found something like peace.

Midway through, a rustle startled me from behind, and I turned my head to see a baboon hoisting itself through a nearby tree.

Ethiopian "baboons" (Gelada monkeys) are unique, with red patches of skin in the middle of their chests like superhero emblems and garish capes of feathery fur the color of coffee with cream. Their faces seem pulled from taffy and left to dry in the sun. And when they snarl, the skin of their snouts recedes over their skulls, revealing an autopsy of spittle, teeth, and gums.

I learned that last fact first-hand, when the charcoal knuckles of a second baboon wrapped around the outhouse wall and drew a roaring face into the stall. The baboon crawled in, swift and spider-like, telegraphing pure, territorial rage. Its hot breath was stronger than my fever. Summoning a speed never matched before or since, I burst out of the toilet, underpants still wrapped around my knees, and ran screaming to the bus.

I can only hope my companions were looking the other way.

This story was a shortlisted finalist in the 2018 World Nomads Travel Writing Scholarship.

Anthony Immergluck is a writer, critic, musician, traveler, and publishing professional with an MFA in Creative Writing (Poetry) from NYU-Paris. 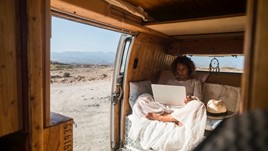 The Perfect Travel Story Pitch: Tips from an Editor

Nat Geo Editor At Large, Norie Quintos answers all the whats, whys and hows on getting your travel story into that travel publication.