Ten years later, what had really changed was me.

“I love you.” The words tumbled out of my mouth, almost accidentally, interrupting our laughter during a playful round of hide-and-seek in a small park near the Papal Palace in Avignon, France. It was the first time I’d ever spoken them to a boyfriend, and now that they were out there, lingering in the air between us, I felt unexpectedly exposed.

Jon, coming out from behind a tree, paused and looked directly at me. “I love you, too,” he said.

We had spent the past several months in the same study-abroad program in Lyon, falling for each other at a pace that was at first tentative and nervous, and later hurried and whole-hearted, as if ushered by a sense of urgency as our time there neared its end.

Upon returning to the United States a few weeks after first uttering those three irreversible words, we found our relationship didn’t translate to our American college lives. It fizzled out before fall semester had even begun.

In my final journal entry from that semester abroad, I wrote: “May has taken my breath away with the promise and threat of June, which will take us all away from here, and though we could visit in the future, once we leave, Lyon will not be the same.”

Now, nearly a decade later, as I sat on the TGV leaving Lyon, I realized the foresight of my younger self could not prepare me for the pull of nostalgia.

I had returned to Lyon with my now-husband, Tim, eager to show him where my old apartment was, my favorite bars, and the medieval streets that had been my playground so many years ago. I had the odd opportunity of sharing stories of my first love with my greatest love in the places where it had all unfolded.

We walked by the door to my old apartment building, on the Rhone River by Pont Lafayette. “It’s this one!” I said. “Or was it this one…” I realized I wasn’t sure, and that the day-to-day routines of coming and going from that apartment, habits that I thought were burned into my memory forever, were now fuzzy uncertainties.

I took Tim to my university and showed him my old musty classrooms and the cafeteria that still serves crisp Kronenbourg 1664 on tap.

Exploring the historic Vieux Lyon neighborhood, I remembered where to find one of the hidden traboules. These unmarked passageways, weaving between buildings, originally served to protect silk merchants transporting their goods to and from market.

I showed Tim silk stores and wooden puppet shops. We walked by the​ Musée Miniature, a curious museum of little replicas of daily life. Vieux Lyon’s familiarity delighted me. Maybe my memories just needed a little resuscitation to bring them within reach.

Yet, the scene was also strikingly foreign. I didn’t recognize anyone along these streets where I had previously seen friends daily. Instead, I was surrounded by tourists. To these strangers, unaware of my history in this town, that's what I was, too.

Leaving Lyon behind for a second time, I realized our travel experiences are driven less by the place itself and more by the people we are when we’re there. Time wasn’t all that separated me from my former self. I had been a naïve, and at times oblivious, student, falling in love for the first time. Now, many years and many great loves later, returning with my soulmate and with a bit more wisdom, I saw Lyon the way I saw my first love – with great warmth and gratitude, but also distance and detachment.

On the last night of my semester abroad, I went to a pub I had frequented with friends. I ordered a dark beer and chatted with people I’d seen almost every day but would probably never see again. The cover band performed Fleetwood Mac’s ​Dreams. I left around midnight, stepping out into a rainy night.

It began to pour as I crossed Pont Lafayette. I stretched out my arms and stood on the bridge, soaking up every cool drop on my bare skin, knowing even then that I would never experience Lyon the same way again.

Sarah Puckett is a passionate traveler and writer. In 2014, she left corporate life to pursue a year-long round-the-world journey, visiting all seven continents.

Love and the Road

Jase Wilson discovers the joys and risks of falling for a fellow wayfarer. 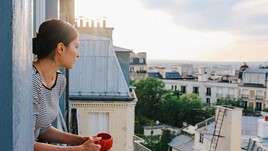