Some of the best decisions are the ones you don't make.

My wife, before she was my wife, was my girlfriend, and she’d called to say she’d met another guy. I was in Los Angeles waiting for a flight to Fiji when the phone rang. We’d been planning a trip there together for months.

Things hadn’t been going so well, but I hadn’t expected this. Heidi and I had first dated years ago, briefly, when we were both newspaper reporters in Montana. We went our separate ways shortly after – she to New Zealand and I to Peru – but we reconnected back in the States a few years later. By then I was working at a magazine in New Mexico and she at a newspaper in Oregon. Two years of dating long-distance had worn us thin.

The trip to Fiji was meant to be a turning point on several fronts, but now it all just made me dizzy. I’d never been to the South Pacific and now a magazine was sending me off on a dream assignment: write a travel story about the Tui Tai, a 12-cabin boat filled with mountain bikes, kayaks, and dive gear that sails around remote, jungle-draped islands off Taveuni in the northeast of the archipelago. Best of all, Heidi could come with me.

I didn’t know it then, but I could hardly have imagined a more beautiful region, so full of waterfalls, black-sand beaches, and hidden sapphire coves. For four glorious days, we’d get to explore them in the most intimate way: living and traveling aboard the Tui Tai, a 140-foot masterpiece of steel and teak with three masts and huge, tangerine sails. She had a massage parlor and a long hardwood afterdeck for soaking up rummy sunsets. Once we got home, I’d pack up and move to Oregon to be with Heidi. Everything was already in motion.

Until, of course, it wasn’t.

“Come anyway,” I said into the phone, my throat dry. I wanted Heidi back and sailing around Fiji would certainly improve those odds. But deeper down I wanted her to be happy, even if that meant without me. I was more desperate than Zen, casting about for anything that would lessen the blow. Within that frame, I had nothing to lose.

“Consider it a farewell-to-us tour,” I said.

Maybe it was my supportive calm – more likely: the pain of wasting an exotic dream trip exceeded the pain of traveling with a guy you’d just dumped – but no matter. Against all odds, Heidi came to Fiji. Suddenly there she was, stepping from an airport taxi in Savusavu, her blond, shoulder-length curls teased by the humidity into a giant golden halo.

We drove east along roads lined with frangipani and wild ginger to a beach sprinkled with boats. We had a few days to kill before the Tui Tai, so a local fisherman whisked us in his panga back west along the impenetrable coast of Vanua Levu, Fiji’s second-largest island, to an off-the-grid scuba diving outfit called Dolphin Bay that had just opened.

A European couple ran the resort, which was little more than a few tents and huts, or bures, stuck in the sand near Viani Bay. A small aluminum panga served as a dive boat. Here, everyone lived in a made-up time zone called Dolphin Time (an hour earlier than actual time) that was meant to help us get the most out of the morning’s calm seas and cooler temperatures. It seemed kooky, but we played along and over the next few days, Heidi and I rose early to dive with sharks and hike along the beach. We also talked and cried and fought. After two days, it was clear I’d lost the girl.

“I need to go home,” Heidi said as we lay in the tent. The staccato squawk of a kingfisher shot through the forest. As promised, I didn’t argue. She would cut the trip short, skip the Tui Tai, and return to the other guy. Even Fiji couldn’t save us.

The next day we left Dolphin Bay in the panga, this time bound for a ferry terminal on the far side of the Somosomo Strait where we could catch a bigger boat back to Savusavu. There, I’d board the Tui Tai and Heidi would begin the long journey home.

As our boat bashed through the waves, I looked west and away from Heidi to begin rehearsing the goodbye ahead. But there in the distance, a three-mast sailboat came sliding up the coast. I looked at the panga captain quizzically, who looked at the ship, quizzically.

“Tui Tai,” the captain shouted. “Only three-mast ship in all of Fiji.”

The Tui Tai had weighed anchor in Savusavu a day earlier than planned, without its guests, in order to get through the strait before a gathering storm turned it into a violent, seasick-inducing nightmare. The crew had informed everyone of a new embarkation point on the leeward side of a natural harbor to the east, but being off the grid, we had had no way of knowing that.

The panga captain hailed the Tui Tai and hatched a plan to draw the boats close together. Angry waves surged and popped between us as the gap between the hulls shrank to less than a shoe-length. Neither boat stopped nor slowed. Instead, the Tui Tai crew lowered a metal gangplank and signaled for us to leap aboard. There would be no time for goodbyes – Heidi hadn’t even had a chance to tell the captain she wouldn’t be boarding.

It all happened so fast. I leapt off the bow of the bucking panga onto the gangplank and turned to Heidi, who stood in the panga looking at the ship. The Tui Tai crew waited along the rails with hibiscus blossoms and cold glasses of guava juice. I extended Heidi my hand to affect a dramatic now-or-never moment of truth. I may not be the guy for you, I thought, but how can you resist this boat!

I like to think that Heidi had a change of heart, that despite everything, we still shared the electric crackle that had taken us this far, and in that final moment, she willingly took my hand as the imaginary soundtrack soared. True or not, before Heidi could say anything, the panga captain hastily grabbed her bag with her passport and wallet and heaved it aboard the Tui Tai, where a crewman promptly ferried it away.

Heidi’s coming aboard the Tui Tai was the best decision we never made. Our days fighting on Dolphin Time had cleared the air, I suppose, and now that we’d said what we’d needed to say, we could let ourselves chart a new beginning.

We spent our days swimming in jungle pools filled by waterfalls, and scuba diving at sites so remote we could name them ourselves. We lazed in the sand with a wooden picnic basket on a deserted beach and swayed like turtle doves as the crew sang songs about the sea in sweet falsettos. Here, traveling together for the first time, Heidi and I fell back in love.

It’s been 14 years since that fateful toss and we’ve been married for 11 of them. Not a day goes by that I don’t think of what almost wasn’t.

Not a year goes by that we don’t travel.

After a lifetime of playing detective, Máté Földi goes on a trip to Argentina that shouldn't have happened, and finds what’s been missing all along. 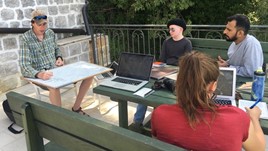